Hi Melissa and welcome to HJ! We’re so excited to chat with you about your new release, Taming My Whiskey!

Thrilled to be here! 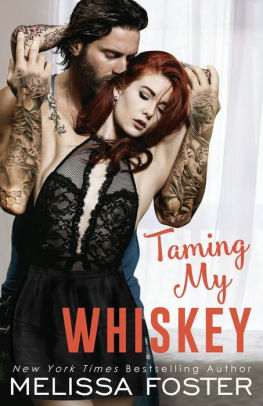 As the daughter of the president of the Dark Knights motorcycle club, Dixie Whiskey has always been stuck under the watchful eyes of not only her overprotective brothers, but of every man in the club. She is finally ready to stand her ground and get out from under their thumbs, and when Jace Stone, the owner of the elite Silver-Stone Cycles, needs a favor, it gives her a not-so-perfect opportunity to stand her ground. But working closely with the man who stole her heart more than a decade earlier proves to be harder than she anticipated. For Jace, no one but Dixie will do as the face of Silver-Stone, but working with the fierce, rebellious beauty means facing his feelings, and facing his feelings might take him to his knees.

This man, naked and in the mood to give, was a deadly combination. He’d been right to think he had the power to ruin her for all other men, but oh what a glorious ruining it would be. ~ Dixie Whiskey

Dixie and Jace first met when she was only eighteen and he was in his midtwenties. The connection was instant and unmistakable, starting with looks across a room, and then their fiercely confident and rebellious natures reeled them each in. But Dixie was young, she was the daughter of the president of the Dark Knights Motorcycle club, and Jace had mountains to climb before he could even think about hooking up with the one woman who could take him to his knees. He placed her firmly in the don’t-look-don’t-touch zone, and Dixie, having thought he simply wasn’t interested, has carried her crush into adulthood, and has compared every man to Jace Stone ever since.

This book had me laughing, cursing, blushing, and UGLY crying. I don’t usually write a stories with a lot of angst , but there was no other way to write this story and stay true to the characters. I freaking LOVE this book, and the characters. Anyone who has ever gotten a taste of what she wanted and then had it taken away will be able to step into Dixie’s biker boots and relate. These two are scorching hot, deliciously rebellious, and stubborn as the day is long.

If they love stories about big, loyal, and loving families who will go to the edge of the earth for each other. Readers who enjoy sitting on the edge of their seats waiting for the couple to kiss (or more) because their banter alone is combustable, should pick up TAMING MY WHISKEY.

I am currently writing A LITTLE BIT WICKED, the first book about our beloved Whiskey’s cousins, the Wickeds, who you will meet in TAMING MY WHISKEY. Justin Wicked and Chloe Mallery, the hero and heroine, can also be found in my fan-favorite Bayside Summers series. I just finished writing BAYSIDE FANTASIES, releasing March 2020, and after TAMING MY WHISKEY releases on October 23rd, the next release is THIS IS LOVE, the next title in my Harmony Pointe series, which will be available on Kindle Unlimited and is published through Montlake Romance.

Giveaway: Win a paperback copy of TRU BLUE, the first title in the Whiskeys: Dark Knights at Peaceful Harbor series. (US Only)

To enter Giveaway: Please complete the Rafflecopter form and Post a comment to this Q: Do you prefer books with high or low angst?

Excerpt from Taming My Whiskey:

She walked over to a table where three guys had just finished their beers and grabbed their empty bottles. “Refills?”

“Yeah, thanks,” one of the guys said.

She walked away with the human inferno that was Jace Stone on her heels.

“Dixie, how can you be upset with me? I gave you a twenty-thousand-dollar donation for the auction.”

She set the bottles on the bar and said, “Which I truly appreciate, but giving of yourself and giving money are two different things. One is easy and mindless. The other tells me who you are. It was a real eye-opener.” She crossed her arms and said, “What did you need help with anyway?”

Diesel grabbed the empty bottles, and Dixie said, “Another round, please.”

“I’m rolling out the Legacy line in the fall.”

“So I’ve heard. Bear’s pretty excited.” In addition to working at Whiskey Automotive, Bear worked part-time designing and building custom motorcycles for Jace’s company. He hadn’t worked on the Legacy line, but he raved about it.

“We all are. This line is my baby. I’ve put blood, sweat, and tears into it. It’s the first motorcycle line that will have bikes designed specifically for women. Nobody’s doing that, Dix. This is a huge deal.”

Bear had told her all about Jace’s innovative, sleek designs for women. It was a genius idea, and it didn’t surprise her that Jace had come up with it. But she couldn’t help thinking about Jace researching the contours of women’s bodies…

“Diesel.” Jace lifted his chin in the manly greeting Dixie was accustomed to.

“Thanks, Diesel,” Dixie said, and as she headed to the table with Jace beside her, she said, “Congratulations on the line, but what does it have to do with needing me?” She set the bottles down, flashed a smile at the customers, and said, “Can I get you boys anything else?”

One of them looked her up and down lasciviously. Jace stepped closer, and the guy shifted his eyes away and said, “No. We’re good.”

Dixie spun on her heels, grabbed Jace’s arm, and dragged him to the side of the room. She felt Diesel’s antennae springing and glanced at the bar, mouthing, I’m fine! Turning her attention to Jace, she spoke in a harsh whisper. “You just fucked up my tip, and I don’t appreciate it. So whatever you have to say, say it and be gone, okay? I’ve got work to do.”

“That guy was looking at you like you were a piece of meat.”

“No shit. They all do.” Except now that she was thinking about it, Jace never had. Not once. In fact, in all the years she’d known him, this was the longest he’d ever looked at her. He didn’t live in Peaceful Harbor, but he traveled there often to see his brother Jared, who had signed up for the auction. Jared owned a restaurant in Pleasant Hill and lived there for several months out of the year. “I have a lot to do, Jace, so if you have more to say, please get on with it.”

“I’m launching a women’s clothing line called Leather and Lace when we launch the Legacy line. We’re making a calendar to promote the clothing and the new bikes. The photo shoot is next week, and the woman I hired to model got hurt and can’t make it. I want you to replace her.”

She blinked several times, unable to believe what she was hearing. An incredulous laugh tumbled out. “Do you even fucking know me, Stone? I am not a pinup girl!” She took a step away and he grabbed her arm, tugging her back to him and keeping her so close, she could see flecks of gold in his sexy hazel eyes.

“This is important to me, Dixie. I don’t want someone who fakes being a biker. I want an authentic woman. I want you.”

“Do I need to point out that I was your second choice, or maybe your tenth. I don’t know or care, because any way you cut it, the answer is no. I told you, I’m not a pinup girl.” She held his steady gaze with an ice-cold one of her own and said, “For the record, Whiskeys don’t play second fiddle to anyone. Sorry, Stone, but you’re out of luck.”

“Come on, Dixie,” he pleaded gruffly. “I’ll let you auction me off.”

“Too little, too late. The ballot is full.” The lie felt victorious. She yanked her arm free and said, “I have customers to help. Good luck with the line. I’m sure, like everything you touch, it will turn to gold.”

“With you on board, it’ll be legendary.”

He leaned closer and lowered his voice to say, “This isn’t over, kitten.”

“What the hell did you just say?” Anger simmered inside her. She poked him in his rock-hard chest and said, “I’m nobody’s kitten, and you’re this close to earning a knee to your groin.”

“You definitely know how to use those claws, and you’re so sweet I bet you purr,” he said arrogantly. “You know you want to do it, Dix.”

His eyes drilled into her, causing heat to sear through her veins and her traitorous nipples to pebble into aching peaks. Damn, he played dirty.

Being the princess of the Dark Knights motorcycle club doesn’t come with a white knight or a fairy-tale castle, and that’s okay, because Dixie Whiskey has never needed a man to slay her dragons or make her whole. Even so, after watching each of her brothers fall in love, she’d sure like a shot at her own happily ever after. But with the Dark Knights watching over her and the only man she’s ever wanted out of reach, she’s not holding her breath.

As the launch of Silver-Stone Cycles’ biggest line approaches, Jace Stone is left needing a favor from the one woman who holds the power to take him to his knees. He knows when it comes to sinfully gorgeous and sharp-tongued Dixie Whiskey, he must stay on his toes and keep his walls firmly in place. But Jace needs her for his business—and Jace Stone always gets what he wants.

When the tall, gruff, and darkly handsome biker presents an opportunity that any other woman might see as the chance of a lifetime, Dixie turns him down flat. But Jace is determined, and he pulls out all the stops—sending Dixie’s overprotective brothers up in arms. Rebellious Dixie takes a stand—going after the freedom, and the man, she’s always wanted. One scorching kiss leads to an undeniable connection, but Jace isn’t looking to be tied down, and Dixie refuses to play second fiddle. Can two untamable hearts find forever love in each other’s arms?
Book Links: Amazon | B&N | iTunes | kobo | Google |

33 Responses to “Spotlight & Giveaway: Taming My Whiskey by Melissa Foster”