Today, HJ is pleased to share with you Andie J. Christopher’s new release: Thank You, Next

Alex Turner is never The One—but always the last one an ex dates before finding love—and now she’s determined to find out why in this hilarious new rom-com. 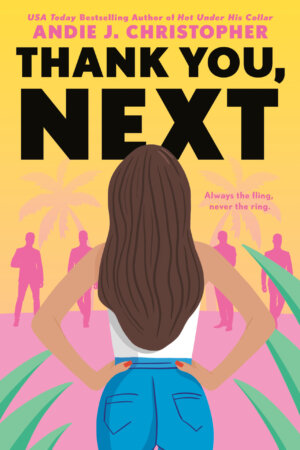 Single divorce attorney Alex Turner is watching reality TV when she sees her latest ex’s new fiancée picking out her wedding dress. Yet again, the guy she dumped went on to marry (or at least seriously commit to) the next person he dates after her. Fed up with being the precursor to happily ever after, she decides to interview all her exes to find out why—starting with her first boyfriend.

Up-and-coming chef Will Harkness mixes with Alex like oil and vinegar, but forced proximity growing up means their lives are forever entwined. When Will learns Alex and her friends are going on a wild romp through Los Angeles to reconnect with her ex-boyfriends, he decides to tag along. If he can discover what her exes did wrong, he can make sure he doesn’t make the same mistake with Alex.

On this nonstop journey through the streets of LA, Alex realizes the answer to her question might be the man riding shotgun…

Enjoy an exclusive excerpt from Thank You, Next

Excerpt. ©Andie J. Christopher. Posted by arrangement with the publisher. All rights reserved.

Giveaway: One print copy of THANK YOU, NEXT for a U.S. only winner.

USA Today bestselling author Andie J. Christopher writes sharp, witty, sexy contemporary romance about complex people finding happily ever after. Her work has been featured in NPR, Cosmopolitan, The Washington Post, Entertainment Weekly, and The New York Post. Prickly heroines are her hallmark, and she is the originator of the Stern Brunch Daddy. Andie lives in the Nation’s Capital with a French bulldog, a stockpile of Campari, and way too many books.

27 Responses to “Spotlight & Giveaway: Thank You, Next by Andie J. Christopher”