Today it is my pleasure to Welcome author Christi Barth to HJ!

Hi Christi and welcome to HJ! We’re so excited to chat with you about your new release, The Accidental Fiancé! 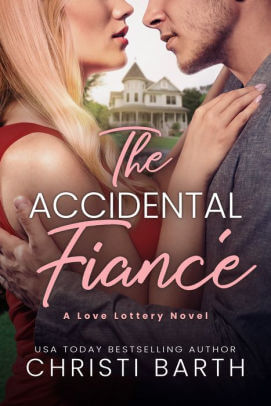 A ramshackle historic inn seems like the worst lottery prize ever…until the winners discover it includes their chance at true love… Alex and his friends have everything on the line with rehabbing the inn. He’s got no time to flirt, let alone get fake-engaged. But Sydney’s a beautiful woman in need of a fake fiancé for three months. How much time and effort could that really take? As long as he doesn’t actually fall for the woman who is jetting off to the other side of the world in 86 days and counting…

“You’re right. You barely know me. There’s no personal bias on your part. And, if you piss me off, we’re about to walk into a classroom full of saws and welding torches.”
“Wow. I thought the modern woman wanted a man who could talk about feelings. Without being threatened with power tools.”
“We want men to talk about their own feelings. Never to try and interpret ours.”

His hand shot out to bracelet around her wrist, stopping the stroking. “Maybe I don’t want you soothed. Maybe I want you riled up. Every bit as much as I am.”
“Is that what you want, Alex?”
“Right now? It’s what I need.”
“Me, too,” Sydney whispered, going up on tiptoe to breathe the words against his lips.
Lips that were right there, for the taking.
So he did.

Ages ago, I read Pot of Gold by Judith Michael about a woman who wins the lottery and how it changes her life (not always for the better). That story idea has intrigued me ever since. But….it’s been done. At least, where money is concerned. So I wanted them to win something tangible that would completely transform their lives. Couldn’t be too easy, though. So winning a ramshackle wreck of an historic inn gave them possibilities – but they’d have to work to get there.

Alex is Mr. Responsible. He carries the weight of everyone’s burdens. Feels like his friends are taking this huge risk for him #nottrue so he’s wound super tight. Definitely no time for fun and flirting. So I paired him with Sydney, who hasn’t been back to her hometown in a decade, and is literally counting down the 90 days until she can get out of there again and never look back. She’s only willing to have a fling with the hot new guy because she knows it won’t last. Throw in their fake engagement and they’re suddenly very, very distracted by each other. Which is simply not a good thing. Logically. But it sure makes it fun to write them leaning in to each other while trying to hard to keep their distance!

Hands down, Sydney’s ‘proposal’ to Alex for their fake engagement. It happens fairly early in the book, and has to be believable and flirty and strictly business. I adore this scene!

“Would you pretend to be my fiancé?”
An easy grin widened his mouth. “You’re hilarious.”
“Sometimes. Especially after exactly one and a half mojitos. But right now? I’m serious.”
“You can’t be.”
“I am.” It wasn’t a good sign that the shock value of her request had sidelined Alex from answering. “Please don’t keep going around in circles as to the truth factor. We don’t have much time. Gram expects me back out there.”
Alex half-stood to pull off his coat. “You barely know me.”
Which made him a better candidate than probably the last six men she’d attempted to date. “I know that you’re bold and passionate and a hard worker, if you’re going to bring Three Oaks back to life. I know that you’re loyal, to do it with your sister and your friends. And I know you’re caring to have not already walked out the door halfway through my story.”
He scratched at the back of his neck, just above the collar of his navy Henley. “What if I’m engaged already?”
“Then you wouldn’t have been flirting with me.” Cripes, what if she’d read him all wrong? “At least, I hope not,” she amended.
“Correct. Which leads us to the next obvious stumbling block. If I’m pretending to be engaged to you, I won’t be able to actually flirt, let alone date, anyone else.” Alex cleared his throat, thrust out an arm as if orating to a crowd, and said, “‘In the spring a young man’s fancy lightly turns to thoughts of love.’”
Sydney’s mouth dried up. Her handsome, almost-fake fiancé could quote Tennyson? That was as panty-melting as his smile. Maybe more so.

No spoilers, but Sydney and Alex do not know much about each other’s backstories for, oh, 90% of the book. Which is key. But when you are fake engaged, you have to decide how much to share…and when too much sharing could run the risk of leading to attraction. So the scene where they, um, negotiated the terms of it was logistically difficult. I think – I hope – it worked, though!

Sydney pulled off her glove and waggled her fourth finger at him. “I don’t know why you gave me a paper clip ring.”
“What else did you expect me to use from that back office? Did you want me to spend a buck on a soda can and rip off the tab?” Frustration sharpened his tone.
Not everyone was a night owl like her. Maybe having this conversation close to midnight with a tired almost-stranger really was a bad idea…
“I know why you did it for real,” Sydney said slowly, with exaggerated patience she in no way felt. “I just can’t come up with a cute story about why you’d fake propose with it.”
“And that’s a time-sensitive piece of imaginative crafting?”
His clever snarkiness would be fun if it wasn’t so darned cold and late.
“Yes. Now that our story’s been on the radio, everyone knows. Which means everyone will ask. I need to have an answer prepared. Also—”
“Oh, good, there’s more,” he interrupted. Alex shifted to stretch one long leg out in front and settle onto the armrests.
“I’m just laying out all the bullet points for the conversation up front.”
“Maybe I should go grab my legal pad.”
Sydney leaned forward, elbows propped on her knees. Hopefully he’d pick up on her seriousness. “Also, I didn’t think this whole fake fiancé thing through.”
A sharp, much-too-loud laugh burst out. Alex slapped a hand over his mouth as he tried to swallow it. Finally, he shook his head and said, “No kidding.”

That you can always get a fresh start. That dreams can come true with a lot of hard work. And most of all, that falling in love doesn’t have to make sense—all it has to do is make you happy.

I’m currently working on book one of a new paranormal series coming in 2022. Shhhh-top secret!

Definitely Not Dating, book 2 in the Love Lottery series comes out on May 4. Then book 3, Wrong For Him wraps it all up on September 28. I finish the year with The Christmas Project coming out on November 16.

Giveaway: An ebook copy of The Accidental Fiancé and 3 Tule ebooks

To enter Giveaway: Please complete the Rafflecopter form and Post a comment to this Q: If you could win an opportunity – like the chance for a whole new career by rehabbing an inn – what would it be?

Excerpt from The Accidental Fiancé:

Is it the chance of a lifetime or his biggest mistake?

When former hotel manager Alex Kirkland, his sister and their best friends pooled their money for an unusual lottery prize—a historic, dilapidated inn on the Maryland shore—as a last-ditch attempt to escape rotten circumstances, they never expected to win. But they’re all looking for a fresh start and a second chance, so Alex convinces everyone to move in and repair the building in time for the spring wedding season.

Sydney Darrow never planned to return to her hometown. But her family needs her and Sydney can endure anything for 90 days—including making sandwiches and serving coffee with a smile until she returns to her jet-setter career. When her grandma mistakes a handsome customer for the “fiancé” Sydney created when she thought her grandma was on death’s door, well…Sydney will do anything to keep her spirits up during treatment. She can persuade him to keep up the charade for a few months, right?

But when Alex agrees to play along, will they both fall for their own fiction?

USA TODAY bestseller Christi Barth earned a Masters degree in vocal performance and embarked upon a career on the stage. A love of romance then drew her to wedding planning. Ultimately she succumbed to her lifelong love of books and now writes award-winning contemporary romance.

Christi can always be found either whipping up gourmet meals (for fun, honest!) or with her nose in a book. She lives in Maryland with the best husband in the world.
Website | Facebook | Twitter | Instagram | GoodReads |

« REVIEW: Quiet in Her Bones by Nalini Singh
Spotlight & Giveaway: Waiting for a Scot Like You by Eva Leigh »

17 Responses to “Spotlight & Giveaway: The Accidental Fiancé by Christi Barth”