Today it is my pleasure to Welcome author Nan Reinhardt to HJ!

Hi Nan and welcome to HJ! We’re so excited to chat with you about your new release, The Baby Contract! 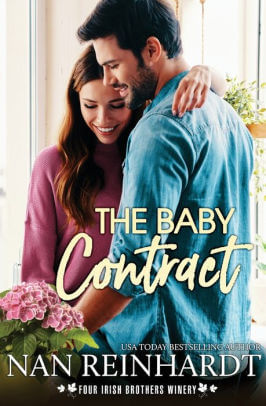 Firefighter and paramedic Tierney Ashton’s biological clock is ticking and she wants a baby, but she’s not involved with anyone, so she considers using a sperm bank. When she shares her wish with her buddy, government analyst and budding novelist, Brendan Flaherty, he offers to be her baby daddy. His only condition is that they get married. They write up a contract, each vowing to keep the relationship strictly platonic except for the baby-making part, but the explosive chemistry between them makes them wonder if their baby contract might really be love.

Her heart opened up at the same time her throat tightened with tears. Dear Lord, how she longed for a child.

“Tee, if I hand you a cup of my swimmers and walk away, there are at least three people up there in the great beyond who will rain hail and lightning down on me.”

He’d never, ever considered her in any terms except as a friend—strictly platonic. Now, though, staring into those amazing green eyes and at her plump lips, he could definitely imagine kissing her. So he did.

She slanted her head sideways to look into his eyes while her fingers still tangled in his hair. “The man bun has to go. I refuse to be married to a guy whose hair is prettier than mine.”

This may seem odd, but my son—he’s a Brendan Flaherty—a government analyst who’s traveled all over the world. I also had been thinking about creating a man who was just a tad quirky, a guy who has a little OCD, not enough to annoy, but enough he’d get teased about it. And of course, the other brothers’ stories played into Brendan’s –it was a chance to develop him and his closeness to his brothers even more than in the previous books.

I think the first time they made love on the morning after their wedding. I’m usually not a fan of writing sex because I always feel awkward, but this is sweet romance so I didn’t have to write the sex, only the feelings leading up to it and Brendan, my darling nerd, had sensuality down to an art. Here’s a snippet:

She leaned away. “You ate chocolate,” she accused, not sure why it mattered, but for some reason it did, even though it made perfect sense. Brendan Flaherty did everything exactly right; he’d never tolerate anything so mundane as morning breath.
He raised one brow. “You were in the bathroom. I couldn’t brush my teeth and I wasn’t about to make love to my wife with morning breath.” The sensuality in his expression took her breath away and made her heart skip a couple of beats.
Heat shimmered between them and yearning pooled in her belly. “Is that what we’re going to do?”
He rolled over, taking her with him, and she was on her back, under him. Desire, earthy and raw, glowed navy blue in his gaze and his voice poured over her like melted butter. “Yeah. That’s what we’re going to do.” Hands on either side of her, he held his weight off her but still let her feel how much he wanted her. Tilting his head to one side, he kissed down her cheek, before finding her lips again. Another searing kiss later, he put his mouth next to her ear. “Unless you have some objection.”
She couldn’t think of a single one.

The wedding vows scene, I think. It was challenging to write vows that were untraditional and that fit the relationship between them at the time. Here’s just Brendan’s vows as my snippet from that scene:

Then it was his turn.
He shifted toward Tierney and, although his voice was a slightly unsteady, his words came out strong and clear. “Tierney, I’ve chosen to be your husband, to walk this new path with you. I promise to listen to you, to always be kind, to help you when you need me, and to give you space when you don’t. I promise to trust and honor you and your decisions. I am excited to make this journey with you, my dear friend.” From his jacket pocket, he produced a jeweler’s box. Tee gasped when he opened it to reveal two gold bands that glittered in the sunlight.
Oh, Bren…” she breathed, her eyes wide with astonishment.
Her look of childlike wonder delighted him so much he wanted to grab her and kiss her right then. Instead, he simply drew out the smaller band, handed the box to Peter, and reached for her left hand. The gold appeared so warm that it surprised him when it felt cold in his fingers as he slid it into place. “This ring—” The word caught in his throat for a second. “This ring is my promise to you that, unless you choose to, you will never have to face the world alone again. I’m all-in.”

Oh, I think it definitely showcases my writing style, which always turns out chattier than I expect it to, but also my stories are more character driven than plot driven and although the plot of The Baby Contract moves along well, the story happens because of the characters. Does that make sense?

The sense of family that is the undercurrent in all the Four Irish Brothers Winery books—how the wives bring Tierney into their inner circle, how the brothers rally ’round her when Bren is in trouble. And also, the idea that you may believe you know exactly what you want, but don’t be too sure and don’t always be looking over there, because what you really want may be standing right in front of you.

Currently, I’m working on a new River’s Edge series for Tule Publishing that showcases the Lange family—three brothers who are all first responders. The first book, which is Ryker Lange’s story is due out around February 2022, then the other two right along after that.

Giveaway: An ebook copy of The Baby Contract & 3 Tule ebooks of your choice

To enter Giveaway: Please complete the Rafflecopter form and Post a comment to this Q: Tierney is seriously considering using a sperm bank to get pregnant because she’s worried her time to have a baby is running out. But her friend intervenes and offers to be her baby daddy. What do you think about those kinds of arrangements? Can a marriage of convenience work? Why or why not?

Excerpt from The Baby Contract:

Firefighter and paramedic Tierney Ashton has always been a bold adventurer, but at thirty-four she longs to embark on a new adventure—motherhood. But who will be the father? Although financially challenging, a sperm bank appears to be her best option. That is, until she shares her dream with her long-time pal, Brendan Flaherty.

Government analyst and world traveler Brendan Flaherty returns home to River’s Edge to help out at his family’s thriving winery and his brother’s new community theater. He also plans to finally achieve his lifelong goal of writing a novel. But when Tierney shares her wish, Bren offers to be her baby daddy—with one condition. Marriage.

It seems like a perfect contract, but will love get in the way?

Nan Reinhardt has been a copy editor and proofreader for over twenty-five years, and currently works mainly on fiction titles for a variety of clients, including Avon Books, St. Martin’s Press, Kensington Books, Tule Publishing, and Entangled Publishing, as well as for many indie authors.

Author Nan writes romantic fiction for women in their prime. Yeah, women still fall in love and have sex, even after they turn forty-five! Imagine! She is also a wife, a mom, a mother-in-law, and a grandmother. She’s been an antiques dealer, a bank teller, a stay-at-home mom, and a secretary.

She loves her career as a freelance editor, but writing is Nan’s first and most enduring passion. She can’t remember a time in her life when she wasn’t writing—she wrote her first romance novel at the age of ten, a love story between the most sophisticated person she knew at the time, her older sister (who was in high school and had a driver’s license!), and a member of Herman’s Hermits. If you remember who they are, you are Nan’s audience! She’s still writing romance, but now from the viewpoint of a wiser, slightly rumpled, post-menopausal woman who believes that love never ages, women only grow more interesting, and everybody needs a little sexy romance.
Website | Facebook | Twitter | Instagram | GoodReads |

« Checking in!
REVIEW: Secrets of a Playboy by Janice Maynard »

23 Responses to “Spotlight & Giveaway: The Baby Contract by Nan Reinhardt”