Hi Terry and welcome to HJ! We’re so excited to chat with you about your new release, The Best of Both Wolves!

Hope you have a great start to the New Year! 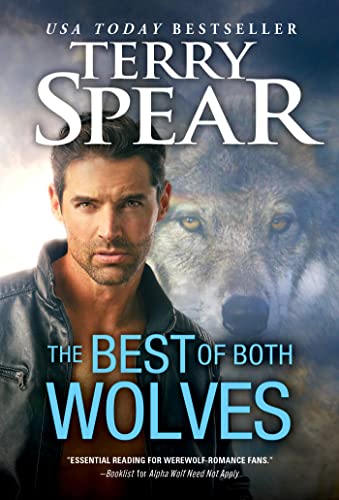 Sierra Redding is on her way to her new job as an art teacher for a red wolf pack in Portland, when she thwarts a break-in at her hotel. She’s just in time to see the would-be thief and sketch him for detective Adam Holmes, earning her a job with the police department as a sketch artist, and bringing her closer to the handsome investigator… But she’s still dating a wolf back home. The problem with the thief isn’t going away though, and Adam has every intention of ensuring Sierra remains with the red wolf pack in Portland and doesn’t return to Texas to be with the old boyfriend and is safe from the thief she witnessed in her room.

Suddenly, there was a knock at the door. His first thought was that someone needed help because of the storm. Hopefully Sierra wasn’t a target for Dover Manning’s continued harassment.
“Expecting someone?” Adam asked, ready to protect her. He was off his barstool in a hurry.
“No, I’m not expecting anyone.” She went to the door and looked out the peephole. “Ohmigod, it’s Richard.” And she didn’t say it in a good way.
“Oh,” Adam said and returned to his seat.
She sounded shocked and not happy about it in the least. What in the world was Richard doing here? But would she finally break it off with him?

Adam is interested in Sierra from when she first joins the pack–she’s smart, and fun to be around, but she’s still seeing a guy back in Texas, when he would like to change that scenario soonest. Sierra thinks Adam is a hot red wolf and loves that he serves and protects as a police detective and she’s glad he offers her a job as a police sketch artist after she witnesses a robbery. She adores him for attending her adult art classes too–despite his lack of innate artistic talent.

I have a lot of fun playing with the wolves and here they are–her finally convincing him to play with her and it always makes me laugh.

She waited for Adam to run off so she could nip at his tail for a while, but he was panting, smiling at her, giving her the evil wolf eye. He wasn’t going for it. Fine. Next time, she was chasing him!
She raced off and he tore off after her. Give me a head start the next time!
He nipped at her tail and she rounded on him. They weren’t going to get very far like this. But what did they care? They were having a blast.

To have fun, to solve the mystery, to enjoy the romance, to become part of the world of wolves and be one with them.

While the Wolf’s Away is the next white wolf novel, coming May 24–David Davis’s story and we have another red wolf Christmas story coming up in October. Currently, I’m working on a Wolff sister’s novel, then a Highland wolf Christmas novel. I’m also finishing The Emerald Isle of Mists, the third book in a trilogy that I haven’t had time to write in forever! I hope to have that done early in the new year.

Giveaway: Cougar’s Mate–ebook open internationally
You Had Me at Wolf–print book, US only

To enter Giveaway: Please complete the Rafflecopter form and Post a comment to this Q: If you had a wolf in your life, what would your new year goal be?

Excerpt from The Best of Both Wolves:

Sierra Redding is on her way to her new job as an art teacher for a red wolf pack in Portland, when she thwarts a break-in. She’s just in time to see the would-be thief and sketch him for detective Adam Holmes, earning her a job with the police department as a sketch artist, and bringing her closer to the handsome investigator…
Book Links:  Amazon | B&N | iTunes | kobo | Google |

USA Today bestselling and award-winning author Terry Spear has written over eighty paranormal romance novels, young adult, and medieval Highland historical romances. Her first werewolf romance, Heart of the Wolf, was named a 2008 Publishers Weekly’s Best Book of the Year, and her subsequent titles have garnered high praise and hit the USA Today bestseller list. A retired officer of the U.S. Army Reserves, Terry lives in Spring, Texas, where she is working on her next werewolf romance, shapeshifting jaguars, cougar shifters, vampires, hot Highlanders, and having fun with her young adult novels, helping with her granddaughter and grandson and raising two havanese.
Website | Facebook | Twitter | Instagram | GoodReads |

« Spotlight & Giveaway: Once a Cowboy by Justine Davis
REVIEW: Pregnant by the Wrong Prince by Jackie Ashenden »

16 Responses to “Spotlight & Giveaway: The Best of Both Wolves by Terry Spear”