Today it is my pleasure to Welcome author Jodie Andrefski to HJ!

Hi Jodie and welcome to HJ! We’re so excited to chat with you about your new release, The Boyfriend Bid!

Thanks so much for having me here today! I’m so excited to share a little about Sarah and Chance’s love story. 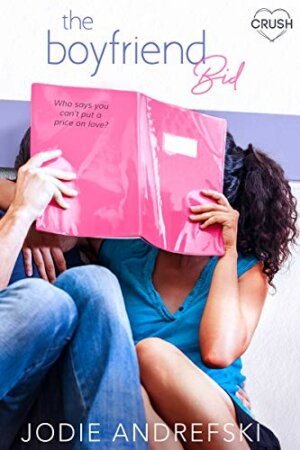 The Boyfriend Bid is the story of Sarah (who is a bit jaded from her last relationship) and Chance (a soccer player who feels pushed to meet his parent’s expectations) who come together in a rather unlikely way–after Sarah’s friends secretly bid on Chance for her in their high school benefit auction in the hopes of Sarah getting over her bad breakup and just having some fun. Sparks do NOT fly immediately. But as Sarah and Chance go on their dates (all the while accompanied and recorded for a local blog) each finds themselves questioning if just maybe…love may have come to them…unbidden.

I have several favorite lines from the book. Some of them are:

It felt like some weird arranged courtship from a Bronte novel, all forced and polite, minus the fancy language.

I’d be immortalized for the world to see, for what would forever become known as the first date from hell. People would tell their children about it for years to come.

He looked sweaty and a little dirty, and his tee shirt clung to him in all the right places. I tore my gaze from his well-defined chest and abs and moved it up to meet his eyes. His lips twitched. I wanted to die.

At their rather unfortunate first meeting, Chance was immediately attracted to Sarah–by both her looks as well as her moxy.

Sarah on the other hand kept her walls up for a while…not wanting to admit even to herself that she was drawn to Chance. But his sweet personality (and his killer smile) eventually pulled her in.

This scene had me giggling at Sarah’s awkwardness. It just reminded me of the embarrassment of being caught checking out the guy you like. But Chance was so darn cute about it!

Chance’s full-on smile was like a sucker punch to my gut. It hit hard and left me spinning. I whirled away and walked as fast as I could to the passenger side of his truck. There was no way I could let him see how just a smile from him affected me.
I reached up to the door handle, but it was locked. Before I knew it, Chance was there too. His arm reached from behind me. I held my breath as his arm brushed against me and I could sense his body close, so close, and for a split second for some insane reason I hoped he was reaching for me. I closed my eyes.
Chance cleared his throat.
My eyes popped open to see him suppressing a grin. He reached toward the door handle instead, key in hand.
“Sorry about that.” His words were right next to my ear. “The lock is messed up on this side so I have to open it manually.”
My cheeks were on fire. My mouth went dry, feeling his breath against my cheek. “Oh, not a problem.” At least that’s what I hoped I said.

if you love sweet YA rom-coms with some definite swoon-worthy moments.

I’m currently working on two more YA books. The first is the third part of the “Girlfriend Request” series–The Love Detour. We will see some familiar faces, as well as some new ones. The friends embark on a summer road rally race to try to win some money for college. They meet some cute new boys along the way, mishaps ensue…along with romance and stolen kisses.

I’m also working on a YA sci-fi which I am super excited about. I’m not able to reveal too much about this one just yet. But I can’t wait to share more with you!

Giveaway: Win an autographed copy of The Boyfriend Bid AND The Girlfriend Request, along with bookmarks and a collectible pin! Sorry US only.

To enter Giveaway: Please complete the Rafflecopter form and Post a comment to this Q: First dates can go all over the place. They can be awkward, sweet, boring, awful, romantic or a combination of all of these things. What is one of YOUR most memorable first dates? What made it stand out so much for you?

Excerpt from The Boyfriend Bid:

When we finished our dinners, I didn’t have any room for dessert, but Chance decided to order a slice of chocolate cheesecake. After he’d tried a bite, he insisted it would be a crime if I didn’t have a taste too. He scooped up a small piece on his fork and leaned across the table. He didn’t break eye contact as moved the fork into my mouth and I closed my lips around it, or as he slid it out after.
I moaned. “Soo good.”
He smiled, a slow, sexy as sin smile.
“More?”
“You have some first.”
He ate another mouthful, then leaned in, closer this time, to feed me another bite. Somehow the knowledge that the utensil had been on his tongue was more delicious than the dessert I was eating. As he licked some chocolate off the edge of the fork, still watching me, I got the feeling he was thinking the same thing.
Heat pooled in my stomach. I swallowed, watching him watch me.
He set the fork down and reached across the table, taking my hand. His thumb traced lazy patterns on my wrist. It felt like I was going to ignite from his touch; he was electric.
We didn’t speak, we just gazed at each other.
“Would you just freaking kiss her already?” The hissed whisper came from across the room.
Omigod.
Talk about a slap in the face reminder of what was really going on.
The muscles in Chance’s jaw tightened, just for a second, then his expression was back to what it had been before we’d been interrupted by our self-appointed stage crew.
I swallowed. I’d agreed to romance. I hadn’t thought it through to realize they’d probably think that included some kissing on camera.
The worst part? I wanted Chance to kiss me, desperately. If I didn’t, I wouldn’t kiss him, regardless of how much they wanted me to or expected it. But I only had three weeks left with him, and I’d decided I was going to take advantage of it, and enjoy my time with him. So, I prayed that he would be okay with kissing me too.
I looked up at him. His eyes stared into mine for several long, long seconds. Then he placed his hands on the table in front of him, and slowly leaned in. My eyes widened, and I licked my lips reflexively as he got closer.
When he was inches away, so close that I felt his warm breath, he paused. I blinked, watching him.
“Sarah,” he whispered.
“Yes?” It came out as more of a squeak.
“I’m going to kiss you now.”
Omigod. Omigod. Omigod.
“Okay,” I squeaked again. I tried to think if there had been garlic in my sauce, and worried if I’d look stupid kissing if they took a picture.
And then his lips touched mine and I stopped thinking about anything at all but the feel of his mouth. I wanted it to go on forever.

Sarah Campbell’s never bid in her high school’s charity auction to win a date with one of the school’s hottest guys. And she’s certainly not going to start now––when she’s still hurting over a bad breakup. The absolute last thing she’d ever do is bid on Mr. Ego himself, Chance DuPont.

Chance just wanted to help out a worthy cause, not get roped into not one but six dates with someone who seemingly can’t stand him. But when Sarah’s friends bid on him on her behalf, that’s exactly where he ends up. Now a local blog is covering the story by following them on all their dates, too?

Jodie Andrefski has been passionate about reading ever since she was a little girl, when she
used to climb trees to escape with a favorite book. She lives and writes in a New Bern,
North Carolina, and has a grown son and daughter.

Andrefski often draws on her background in education and mental health counseling to
bring real world experience to her writing. She loves coffee, a good Netflix binge and just
about any dessert. She is a firm believer in the magic of a first kiss, and insists that you
should never, ever give up on your dreams.
Website | Facebook | Twitter | Instagram | GoodReads |

17 Responses to “Spotlight & Giveaway: The Boyfriend Bid by Jodie Andrefski”