Today, HJ is pleased to share with you Sinclair Jayne’s new release: The Christmas Sing Off

He’s closed the door on music and Christmas. Can her voice be the key? 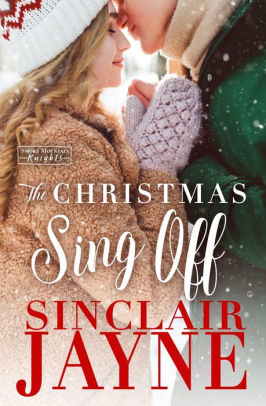 At the height of his fame, pop star Shepard Lake walked away. No one knows why, though rumors are rife. Creatively blocked, he seeks inspiration and a fresh start for his life and career by returning to his Tennessee roots. He finds far more than he bargained for when he is drafted to help with a small town Christmas festival.

Tyler Knight lives and breathes music, but a career as a songwriter remains a distant dream. When her sister asks her to return to their hometown, Sweet Tea, Tennessee, and help her with the town’s Christmas Carol Sing Off, Tyler is thrilled to have a change of scenery and a chance to start over after a series of disappointments. Then she is paired with the infamous Shepard Lake who’s too everything –handsome, confident, talented and way out of her league.

But is he? Will this Christmas be the one where Tyler gathers her courage to pursue her dreams of music and love?

Enjoy an exclusive excerpt from The Christmas Sing Off

Shepard Lake was in the studio with her. Never in a million years had she ever dreamed of anything so epic happening to her. And now that he’d showered and shaved so that his lean, hungry face was clean, his jaw strong and angular with a deep cleft in his chin, and his dimples visible every so often, she felt a little breathless. He was even better looking than pictures she’d seen in social media and magazines. Even hotter and more charismatic than his music videos. He was tanner. Leaner, rangier. Everything.
And she felt conscious of herself as a woman in a way she never had before.
She felt too warm and her skin too tight.
But the tone in his gravelly, deep voice reached inside of her and made her heart feel pinched and her tummy weird.
“I’m not sure what you mean.” She felt so breathless. And her voice sounded higher. Did she sound like a child? Why couldn’t she be confident and smooth like Sutter? Or her sister Shane who could talk to anyone about anything? She’d been a counselor before she’d inexplicably—to Tyler anyway—switched to bartending in a small Montana town called Marietta before coming back to Sweet Tea a month ago to help Dawson get Prohibition—his hotel bar—up and running.
For a moment Tyler felt he wouldn’t answer. Shepard prowled around the studio, looked at the soundboard, the large closet with additional instruments in case musicians needed anything extra.
“You know what happened to me, to my career.” He stopped in front of her. His whiskey-gold eyes blazed fire, and for a moment she felt a little dizzy. She felt like he was accusing her of spying on him.
“No. Yes,” she said. “I mean—” she ducked her head “—I have followed your career, been a fan.” Her cheeks heated, but really half of the world at a minimum knew who Shepard Lake was and, conservatively, could hum along to more than one of his number-one hits.
God she was all kinds of awkward, but he was a star. He knew it. He was used to fans gushing. But she was trying not to gush.
“And, of course, I’ve missed your music and wondered when you’d next release.” She shut up abruptly. Not many musicians wanted to be reminded of blank spots in their careers, but Shepard Lake was a superstar. He didn’t have to prove anything to anyone.
Epiphany! “Oh. That’s why you’ve been traveling so much. Volunteering and having new experiences and hiking and camping. For inspiration.”
Wow. Just wow. She would never interrupt his creative process or spy, but just to be close to such creative genius!
“Maybe you can start working on some new material in the cabin. Sutter and Dawson are used to artists working here. They won’t interrupt. You’ll have time to write or lay down some tracks or…” It was a little daunting how still he was.
His face and body could be carved from stone.
“I was going to make sandwiches,” he said. “Paninis. Do you eat meat? Cheese? Veggies? Are you vegan?”
Tyler blinked. Well, okay. He did not want to talk about music or his career. She could understand. Her own family didn’t know that she wrote her own songs and sang them only in her bedroom at night. She never recorded any of them except on her iPhone.
“Yes, to everything.” She dragged her wandering mind back to the conversation. “Except vegan.”
He nodded.
“You were right. The fridge is fully stocked. Preferences?”
“Surprise me,” she said.
His eyes flared a little, and she felt a rush of pleasure. She wasn’t totally dull and predictable.
“My pleasure,” he said, not moving.
Tyler hugged her guitar a little closer almost like she needed a barrier between them.
“Okay.” She stood slowly, swung the guitar to the back of her body. “I just need to return this to my room and…”
“You don’t keep it here so that you can play? The acoustics are sick. I can just imagine how that riff would sound amped. I won’t bother you by listening to any recording sessions you do alone or with Sutter.”
Record with Sutter? She felt a little sick just thinking of it.
“I don’t record,” she said stiffly.
He jammed his hands in his pockets, which made the faded, distressed jeans ride lower on his hips. And now her tummy felt weird for an entirely different reason. Her breathing kicked up along with her heart.
“I like your face without the beard,” she whispered, which was not what she’d meant to say and “like” was a wildly inaccurate description of her reaction to his clean-shaven jaw. “I mean…I can see you better.”
Could she sound any more starstruck or dumb?
He ran his lean, tanned fingers through his hair and then jammed his hand back into his pocket. He rocked back on his bare feet. “Tyler, I think you see me too well already,” he said.
“What do you mean?”
He took a bite out of one of the cookies he held, and she felt a rush of pleasure that he’d seen them and had taken a few. He smiled, looked a little shy, and then held out one to her.
“Delicious,” he said. “Let’s eat.”
He turned and walked out. Tyler put her guitar down and then picked it up again. They were going to talk about music, right?
It was time to seize one of life’s opportunities.
Tyler deliberately brushed by his body as she walked through the door. The thrill shot to her toes. Make that two opportunities. Why not? She had two hands.

Excerpt. ©Sinclair Jayne. Posted by arrangement with the publisher. All rights reserved.

Giveaway: Copy of ebook of The Christmas Sing Off and Tule Publishing swag

Sinclair has loved reading romance novels since she discovered Barbara Cartland historical romances when she was in sixth grade. By seventh grade, she was haunting the library shelves looking to fall in love over and over again with the heroes born from the imaginations of her favorite authors. After teaching writing classes and workshops to adults and teens for many years in Seattle and Portland, she returned to her first love of reading romances and became an editor for Tule Publishing last year. Sinclair lives in Oregon’s wine country where she and her family own a small vineyard of Pinot Noir and where she dreams of being able to write at a desk like Jane Austen instead of in parking lots waiting for her kids to finish one of their 12,000 extracurricular activities.

« REVIEW: All Fired Up by Lori Foster
Spotlight & Giveaway: The Princess Plan by Julia London »

23 Responses to “Spotlight & Giveaway: The Christmas Sing Off by Sinclair Jayne”