Hi Joanne and welcome to HJ! We’re so excited to chat with you about your new release, The Forbidden Brother!

Hello! So nice to be back at Harlequin Junkie! I’ve been waiting sooo long to share my next three McNeill stories! I’m excited about this trilogy. 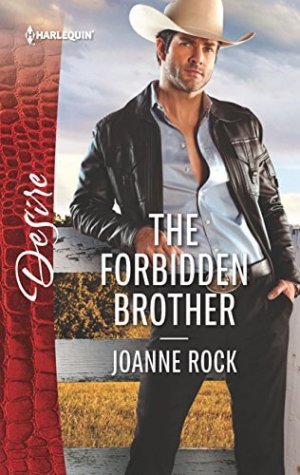 Jillian Ross is in need of an adventure after life sidetracked her with breast cancer. She’s made a radical change in career, determined to chase her dreams now, and finally do some travelling. Her new job as a film scout lets her do that, and she’s been eyeing a ranch outside of Cheyenne for a film. Too bad the surly owner is impossible, refusing to even speak to her let alone meet her! But he has a much friendlier brother– a man she recognizes from his social media pages. When a dance on a rainy night leads to MUCH more between them, Jillian doesn’t quite know what to say about the favor she’d wanted to ask. She’s even MORE surprised when her one-night fling turns out to be Mr. Surly the Ranch Owner after all since Cody and Carson are twins. It’s a mix-up opening that’s very sexy and leads to lots of complications.

“It’s not a rodeo without a turkey leg.”
This was from the hero during the heroine’s first rodeo… he takes her around to the vendors outside the arena afterward so she can soak up the carnival atmosphere. It was a fun moment in the story since the heroine has had a really hard few years and she’s trying to savor life to the fullest. The hero is normally a serious, hard working guy, but he’s able to lighten up on the night of the rodeo date to show Jillian a fun time. It made me love him!

The hero notices the heroine because she’s a bright flame on a rainy night– red hair, vividly colored clothes, she’s impossible to look away from. Also, her eyes follow him everywhere!

The heroine notices him because she’s trying to track down his brother (not knowing the two are twins). Then, she grows attracted by the way he returns her stare. She’s surprised at the awareness since she hasn’t felt attraction throughout her cancer battle, and she loves the burst of good feeling that the spark gives her.

The scene when they’re dancing and decide to throw themselves into the adventure of the attraction… they each had strong reasons for needing the night to be simple, and I loved how that happened–

“Since the stars aligning would be a first for me, I wonder if can ask you just one thing.”
He halted them in the middle of the floor, now that the two-step was done. Bringing her fractionally closer, he swayed to the slower tempo in a barely moving lovers’ dance.
She followed him seamlessly, her gaze never straying from his. She was fully focused on him. Framed by dusky brown lashes, those green-gold eyes reminded him of new grass and spring.
“Sure. Ask away.” Her voice had a sweet-sultry quality that made him want to listen to her speak more.
“Don’t you ever wish you could forget about the expectations of the world around you and just…choose your own adventure?” He remembered books like that when he’d been a kid, where you could test out different endings to a story.
For someone who’d always taken the safe route in real life, he had liked the option of seeing how another choice played out. At least in a book. Cody couldn’t do that with ranching. Or his family. But he could take a chance here. Tonight.
Her lashes swept down for a long moment, hiding her expression. But when she tilted a glance up at him again, there was a new curiosity there.
“Are you asking to share an adventure with me?” She sounded disbelieving. But maybe a little intrigued.
“I suppose I am.” He would never have made such an outrageous suggestion to a local—a woman who knew him or his family. But she had “tourist” and “temporary” written all over her. Surely there couldn’t be any harm in drawing out the flirtation? “What would you say to throwing away the rule book for a little longer?”
He let go of her hand for a moment to tip her chin higher, to see her face in the dim overhead light of the dance floor. Feminine interest flickered in her eyes. He inhaled as she released a pent-up breath. He could almost taste her in the space of silence between them.
Then he leaned closer to press his cause. “Choose me tonight.”
***
It was kismet.
Normally, Jillian wasn’t the kind of woman who jumped on the fairy-tale bandwagon. Cancer had shredded every last romantic notion she had about the world and her place in it. These days, she was a realist. A pragmatist.
But how else could she view this man’s suggestion that she choose a new adventure with him, at a time in her life when she was desperately rewriting her personal script to embrace new challenges? She owed her sanity and maybe even her physical health to that list of life adventures she’d written.
So for Carson McNeill to somehow tap into the deepest hunger of her soul and suggest they throw out the rule book, Jillian knew there had to be some kind of cosmic destiny at work. Call it providence, or maybe luck. Surely she could table her business agenda—just for a little while—to pursue this off-the-charts attraction? Once he’d rolled out the idea of an adventure, her personal mantra this year, Jillian saw it as a gauntlet thrown down by the hand of Fate.
She was powerless to refuse.

For a sexy escape with a cowboy! I hope I’ve brought this Cheyenne ranch world to life in The Forbidden Brother. This branch of the McNeill family is complicated, with lots of undercurrents. Cody’s romance with Jillian is not at all what he was expecting, but just what he needs.

I just turned in my second Texas Cattleman’s Club book for Harlequin Desire. The Rancher’s Bargain will be available in January 2019. But before that, I hope readers will keep an eye out for Wild Wyoming Nights (August), when Cody’s twin Carson gets his story. That’s followed by One Night Scandal (September), when the McNeill family mysteries are all revealed!

Giveaway: I’m giving away the three McNeill stories that come before this one- His Pregnant Secretary, Claiming His Secret Heir, and For the Sake of His Heir. This contest is open to US and INTL readers. If an INTL winner is chosen, the books will be digital downloads. A US winner will have the choice of print or digital. Thank you! 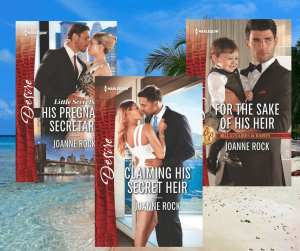 To enter Giveaway: Please complete the Rafflecopter form and Post a comment to this Q: Let’s say you’re at a honky-tonk in Cheyenne! What song would you choose for the jukebox if you had a handsome stranger to dance with?

Excerpt from The Forbidden Brother:

Jillian Ross craves adventure. And she gets it when her new career as a film scout leads her to the ranch owned by the wealthy Wyoming McNeills. Giving in to temptation with the playboy McNeill causes havoc—since it’s actually his reclusive twin, Cody, she’s fallen for! Now she’s pregnant—and still can’t get enough of her reluctant rancher. Is this adventure just beginning?
Book Links: Amazon | B&N | iTunes | kobo | Google |

Four-time RITA finalist Joanne Rock has never met a romance sub-genre she didn’t like. The author of over eighty books enjoys writing a wide range of stories, most recently focusing on sexy contemporaries and small-town family sagas.
An optimist by nature and perpetual seeker of silver linings, Joanne finds romance fits her life outlook perfectly–love is worth fighting for. A frequent speaker at regional and national writing conferences she enjoys giving back to the writing community that nurtured and inspired her early career.
She has a Masters degree in Literature from the University of Louisville but credits her fiction writing skills to her intensive study with friend and fellow author Catherine Mann. When she’s not writing, Joanne enjoys travel, especially to see her favorite sports teams play and to gather new ideas.
Website | Facebook | Twitter | Instagram | GoodReads |

79 Responses to “Spotlight & Giveaway: The Forbidden Brother by Joanne Rock”