Today it is my pleasure to Welcome author Joanne Walsh to HJ!

Hi Joanne and welcome to HJ! We’re so excited to chat with you about your new release, The Greek’s Bedroom Bargain! 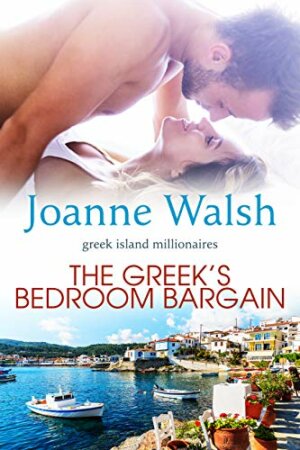 Frankie’s first impression of millionaire and volunteer firefighter Nik Kontarinis is that he’s arrogant, infuriating, a little bit demanding and devastatingly attractive…and to be avoided at all costs. Her marriage has ended badly and she’s on the Greek island of Kathos to reflect and lick her wounds, not become another notch on Nik’s bedpost.

But then a villa restoration project offers Frankie the perfect opportunity to reboot her real estate career and her life, if only she can find herself a business partner. Nik makes her an outrageous proposal: he’ll bankroll her project without charging interest if she will have an affair with him for as long as it takes to renovate the villa.

Frankie is torn and tempted. Not least because she’s spent her time on Kathos with Nik constantly on her mind. She’s dying to get going with revamping the villa—and her body longs for Nik’s touch. Perhaps it will be part of her healing process if she takes a risk and has the fling he’s offering.

However, the more Frankie gets to know Nik, the more she likes, respects and wants him. When the renovation is over, will she be able to walk away?

She leaned in closer to him. He could feel the warmth of her body against his, her silky, platinum-blonde hair trailing over where the skin of his arm was bared beneath the rolled-up sleeve of his shirt. “We could go somewhere quieter,” she suggested huskily.

Frankie has had that horrible experience of being cheated on by people close to her and begins the story wanting to start over but still feeling bruised by betrayal. Nik looks to her like the kind of arrogant, alpha guy she should avoid at all costs. But what she doesn’t know is that he longs to fall in love and settle down, if only he can find the right woman to trust. What fascinated me about both characters was how they kept on coming back to one another, no matter how hard they tried to resist, which leads to many twists and turns in their love affair. Also, Nik’s trajectory, as he grows from womanizer to reveal his true, strong self, who faces up to the guilt that haunts him about his brother Marco’s disappearance, and who will stick around and do anything for the woman he loves.

I would choose a scene that comes early in the book when Frankie encounters Nik for the first time. He makes quite a scene-stopping entrance dressed in his firefighter’s uniform! What I also like about it is that it shows Frankie being confronted by the sight of a red-blooded male who gets her pulse racing but she tries so hard to cover up her reaction.

I think this would offer a good dramatic challenge to the actors auditioning, demanding they give a nuanced performance by conveying emotion to the viewer but not to the other player.

Até, a dog caught in a wildfire, also features in this scene. Will she recover from her injuries?

“Kalo apogevma. Good afternoon.”
The rumble of a deep male voice had her spinning around. She saw the outline of a man standing in the doorway, framed by rays of late afternoon sunshine. “Oh! Good afternoon,” she responded.
He entered, and her vision adjusted to take in his sturdy work boots, long, strong-looking legs in navy-blue trousers edged with fluorescent stripes, and a buttoned-up blazer with three stars on its epaulettes that were stretched across broad shoulders—a fireman. A very handsome fireman. Her instant attraction to him startled her; she’d thought herself numb to the opposite sex since Andrew had dumped her.
It was a good few seconds before she also realized he was cradling a dog with wild, frightened eyes that was wrapped in what looked like a T-shirt. “Can you deal with this?” he asked crisply in accented but perfect English.
She looked down at the shivering canine in his arms. When the dog let out a whimper, another kind of instinct kicked in. She came forward and allowed the fireman to pass the animal to her. She saw the T-shirt had ruffled up to reveal an angry red wound on its left flank. “What happened?” she asked.

That love comes when you least expect it and sometimes in the unlikeliest of forms; you just have to take the risk. Also, you can only really move on if you can forgive. Finally,
that miracles can happen, if you have faith.

Right now, I’m hard at work on the third and final book in the Greek Island Millionaires trilogy, which is Dimitri and Sally’s story. The second book, The Russian’s Pleasure Proposition, featuring Sergei and Hannah, is released on July 18.

Giveaway: Copy of The Greek’s Bedroom Bargain ebook and ANY free ebook from the Tule Bookshop

To enter Giveaway: Please complete the Rafflecopter form and Post a comment to this Q: Frankie asks for Nik’s financial backing for a property development project she’s keen to make happen. He agrees but demands to sleep with her in return. What would you do in Frankie’s position—remembering that she’s been secretly lusting after Nik for weeks; agree to his outrageous proposal or walk away?

Excerpt from The Greek’s Bedroom Bargain:

Infuriating, arrogant, demanding. And disturbingly sexy. Those were the first thoughts Frankie had about Greek millionaire and volunteer firefighter Nik Kontarinis, but she was not going to fall prey to his seduction plans. She was on the island of Kathos to lick her wounds and figure out her next steps, not to become another notch on Nik’s bedpost.

A villa restoration project presents the perfect opportunity for Frankie to reboot her business and her life. There is only one problem–she needs a business partner. When Nik offers her an opportunity too good to pass up, Frankie is tempted to accept. Except that Nik has set his terms and there are definitely strings attached.

Will Frankie give in to temptation and play?

Joanne Walsh became hooked on romance when her grandma gave her a copy of Gone with the Wind for her birthday. The teachers at her strict girls’ school didn’t approve of a ten-year-old reading such a ‘racy’ novel and confiscated it. But Joanne still became a voracious romance reader and, later, an editor for one of the world’s leading women’s fiction publishers, where she could do two of her favorite things: work with her beloved alpha-male heroes and spend time in the USA. These days, Joanne lives in the south of England and divides her time between freelance editing, writing and spending time with her very own real-life alpha…
Website | Facebook | Twitter | Instagram | GoodReads |