Today it is my pleasure to Welcome author Leddy Harper to HJ!

Hi Leddy and welcome to HJ! We’re so excited to chat with you about your new release, The (Half) Truth! 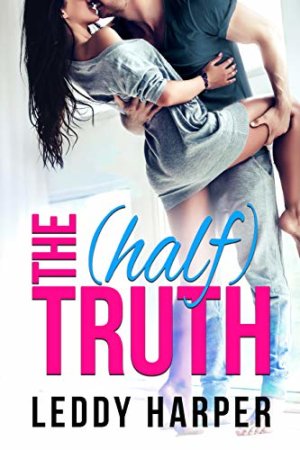 They say there’s one in every family. Well, they lied, because I had an entire family full of them.

Tatum is quirky and awkward, and the world’s worst liar. But she means well. Jason may have a reputation for being a ladies’ man, and he may look like the quintessential jock or Mr. Popularity, but all he wants is to be loved and to have the chance to love someone unconditionally. I think the part that surprised me the most was how comfortable Tatum became around him when it was only the two of them. I mean, she was quite a mess, and did or said some of the most outlandish things in his presence, but once he got past the initial awkwardness, he was able to get her to open up better than anyone. And I loved that the most about them.

I would have to choose the first night they spend together as the audition scene. I feel it would show their comedic ability, as well as give an idea of their chemistry. Tatum and Jason have undeniable chemistry, both when she’s being awkward and when things get heated. Then again…even Tatum’s sexy talk is off the wall and not expected. So if two actors can make me feel the passion while they’re laughing and fumbling around, then they’ve got the parts!

It has taken me a very long time to learn to laugh at myself, and even now, there are moments I have to remind myself to do so. I would love it if people walked away from this book realizing that while we can’t control what others say about us, or what kind of rumors are spread, in the end, the only thing that matters is how we handle it. We all try to save ourselves from humiliation. It happens, and it will continue to happen—we’re humans, it’s part of life. But if you can laugh at yourself, if you can embrace the socially awkward parts of yourself, if you can tell your insecurities to screw off and take a hike, then you’ll be untouchable. It’s one thing I always try to teach my kids. I tell them every day how weird they are…and they always smile and say “I know.” That way, anyone who wants to cut them down with insults will be wasting their time, because being different, being unique, being weird or awkward or clumsy isn’t an insult. Embrace your oddities. It’s what makes you you.

After The (Half) Truth, I have a release scheduled for March, called The Reality of Wright and Wrong. After that, I don’t have anything planned (could change at any moment) until Kelsey’s book, The (Secret) Baby, releases in August. I’m really excited about the lineup this year, probably more so than any other year of releases!

Giveaway: eBook: The (Half) Truth by Leddy Harper (Gifted via Amazon)

Leddy Harper had to use her imagination often as a child: she grew up the only girl in a family full of boys. At fourteen, she decided to use that imagination to write her first book, and she never stopped. She often calls writing her therapy, using it to deal with issues through the eyes of her characters.

Harper is now a mother of three girls, making her husband the only man in a house full of females. She published her first book to encourage her children to go after whatever they want, to inspire them to love what they do and do it well, and to teach them what it means to overcome their fears. You can learn more about Harper at
Website | Facebook | Twitter | GoodReads |

« REVIEW: Huge Deal by Lauren Layne
Spotlight & Giveaway: The Object of Your Affections by Falguni Kothari »

22 Responses to “Spotlight & Giveaway: The (Half) Truth by Leddy Harper”