Today, HJ is pleased to share with you JoAnn Ross’s new release: The Inheritance

With a dramatic wartime love story woven through, JoAnn Ross’s brilliant new novel is a gorgeous generational saga about the rivalry, history and loyalty that bond sisters together 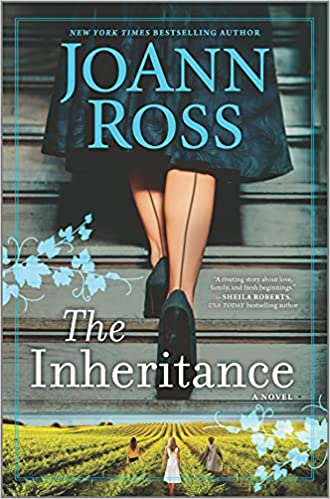 When conflict photographer Jackson Swann dies, he leaves behind a conflict of his own making when his three daughters, each born from a different mother and unknown to each other, discover that they’re now part owners of Maison de Madelaine, the family’s Oregon vineyard—a once famous business struggling to recover from a worldwide economic collapse.

After a successful career as a child TV star, a disastrous time as a teen pop star, and now a successful author, Tess is, for the first time in her life, suffering from a serious case of writer’s block and identity crisis.

Charlotte, brought up to be a proper Southern wife, has given up her own career goals to support her husband while having spent the past year struggling to conceive a child to create a more perfect marriage. On the worst day of her life, she discovers her beloved father has died, she has two sisters she’d never been told about, and her husband has fallen in love with another woman.

Natalie, daughter of Jack’s long-time mistress, has always known about both half-sisters. Still mourning the loss of her mother, the death of her father a year later is a devastating blow. And she can’t help feeling that both her sisters may resent her for being the daughter their father decided to keep.

As the sisters reluctantly gather at the family vineyard, they’re enchanted by the legacy they’ve inherited, and by their grandmother’s rich stories of life in WWII France and the love she found with a wounded American soldier who brought her to Oregon where they started Maison de Madelaine.

Enjoy an exclusive excerpt from The Inheritance

Excerpted from The Inheritance by JoAnn Ross, Copyright © 2021 by JoAnn Ross. Published by arrangement with Harlequin Books S.A.

Excerpt. ©JoAnn Ross. Posted by arrangement with the publisher. All rights reserved.

Giveaway: Three print copies of THE INHERITANCE sent to US/CA winners only

New York Times and USA TODAY bestselling author JoAnn Ross has been published in twenty-seven countries. The author of over 100 novels, JoAnn lives with her husband and many rescue pets — who pretty much rule the house — in the Pacific Northwest. Visit her on the web at www.joannross.com.

« Spotlight & Giveaway: Missing At Christmas by K.D. Richards
REVIEW: The Only King to Tame Her by Millie Adams »

35 Responses to “Spotlight & Giveaway: The Inheritance by JoAnn Ross”