Hi Kaylie and welcome to HJ! We’re so excited to chat with you about your new release, The Montana Cowboy’s Heart! 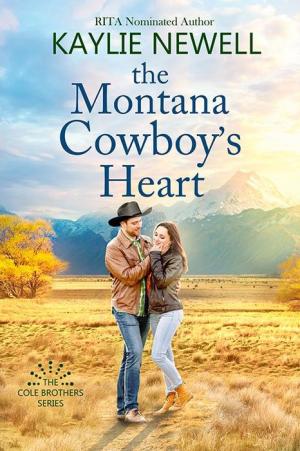 Porter Cole runs a working dude ranch with his twin brother, Brooks. He’s a tough man, hardened by his upbringing. But when he meets elementary school teacher Justine Banks, she’ll find her way past his walls. The two of them will end up being mentors to her friend’s orphaned grandson who’s staying with her for the school year, and together they’ll form an unlikely family. Mostly, this is a story about love and forgiveness, and learning to find happiness again.

“I’ve spent so much time running away from life, that I honestly think I’ve forgotten how to live it.”

I really like this quote because it pretty much sums up Justine’s struggle with learning how to trust again after being let down so much in relationships. She wants to love again, she just doesn’t know how. That’s where Porter comes in. With him, there’s simply no fighting it anymore.

The little boy’s character (he goes by the nickname Cat), was inspired by my late uncle. He’s got red hair and freckles like my uncle, and is a firecracker. He’s also sensitive and sweet, and loves with his whole heart. I hope my uncle would be proud 😉

Since this is the last book in my Cole Brothers Series, I already knew Porter pretty well, since he showed up a lot in the first two books. He’s fairly wounded emotionally, but he’s also got a light, funny side, too. He’s a prankster, and he likes to rib his brothers a lot. It’s this side of his personality that really connects to Cat’s, since Porter is really a kid at heart.

Justine is more serious, but Porter brings her out of her shell. She wants to believe in love and happy endings, but she’s naturally guarded. Porter really balances her out.

The first chapter was fun, because Porter’s character is on full display. He has such a good connection with kids, and to Cat especially, that I wanted to set that feeling up in this field trip scene (where he also meets Justine for the first time).

Porter Cole leaned against the paddock fence and looked out over the group of sixth graders with his Stetson pulled low over his eyes. He was only half listening to his twin brother go on and on about dude ranch technicalities- how many guests they were expecting this fall, how they weather-proofed the barn, blah, blah, blah. Brooks had a tendency to ramble, especially when he was talking to kids. It was like he had this boredom radar. Whenever he sensed that anyone younger than fifteen could be halfway interested, he had to age at least thirty years and start talking about the most mind-numbing things. Exhibit A…caulking.
Porter rubbed the back of his neck. No, what kids this age wanted to hear about was the gross stuff. The stuff they could elbow each other in the ribs about, while laughing behind their hands. If Porter was giving this speech, he’d probably start out with cattle worming, and go from there.

There is a scene toward the end of the book where Cat ends up finding his biological father who left him as a baby. He sees him at a livestock auction, and decides to confront him. He’s only in the sixth grade, so it was a hard scene to write. As a mom, his character squeezed my heart. I wanted Porter to be the father in this scene that Cat never had, and to see a lot of that childhood pain in his own.

They came to a stop a few yards away from the man in green. He was still standing with his back to them, his cream-colored cowboy hat pulled low over his eyes. His shoulders were hunched as he studied the cattle. He was alone now, the man he was talking to before, swallowed up by the crowd. It was the perfect time to approach him, if that’s what Cat decided to do.
Porter put his hand on Cat’s shoulder and squeezed gently. “What do you think, Champ?”
Cat didn’t take his eyes off the man in green. It was like they were glued there, watching for any sign of familiarity, anything that would bring back a memory or two. Porter thought back to sitting in that Italian restaurant with Justine, waiting for his mother. He knew how hard Cat’s heart was beating inside his chest. He knew how dry his throat was, how his tongue felt like cotton in his mouth. But most of all, he knew all about the doubts that were racing through his mind at that moment. What had he done wrong? Why hadn’t he been good enough? If his own father didn’t care enough to stick around, who else would?
Porter ground his teeth together, feeling the muscles in his jaw bunch almost painfully. He took his hand off Cat’s shoulder and took a small step back. “Whatever happens,” he said, his voice low. “I’ll be right here, okay?”

I think this book is a good example of what I write best- small town romance, with sexy alpha heroes (who are really softies deep down!).

I hope there is a strong feeling of family and forgiveness. Maybe of being open to starting over again.

Right now, I’m working on the first book in a new series. This one is set on the Oregon coast- a book very close to my heart, since I’m an Oregon girl, born and bred!

To enter Giveaway: Please complete the Rafflecopter form and Post a comment to this Q: I love second chance romances, which is what my new book will be. What are your favorite romance tropes?

Excerpt from The Montana Cowboy’s Heart:

Porter Cole excels at two things—running his Marietta-based dude ranch with his twin brother, Brooks, and charming women. But when the beautiful and stoic Justine Banks arrives at the ranch with a bus full of children for a field trip, everything he thought he knew about himself flies out the window.

Justine has no time for romance, especially not with a sexy cowboy who has the greenest eyes she’s ever seen. But Porter has a way of making her feel alive, especially after taking in her friend’s struggling eleven-year-old grandson. When the boy takes off trying to find his long-lost rodeo cowboy father, Porter offers to help and Justine finds herself confronted with her own childhood pain. Can she trust Porter?

All roads seem to lead back to the ranch. In Porter, Justine and young Tom see a man who holds the key to healing their hearts, and for the first time ever, Porter sees a chance for a family. Will they all be brave enough to forgive their own pasts and imagine a future together?

For Kaylie Newell, storytelling is in the blood. Growing up the daughter of two writers, she knew eventually she’d want to follow in their footsteps. She’s now the proud author of over a dozen books, including the RITA® finalists, Christmas at The Graff and Tanner’s Promise.