Today it is my pleasure to Welcome author Adriana Anders to HJ!

Hi Adriana and welcome to HJ! We’re so excited to chat with you about your new release, Uncharted! 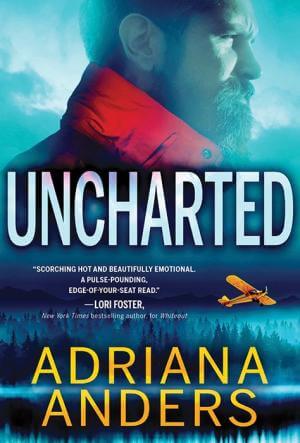 UNCHARTED is book two in the Survival Instincts series. In this follow-up to WHITEOUT, kick-ass pilot Leo Eddowes is sent into the Alaskan wilderness in order to locate a scientist and a missing virus. Instead, she crash lands in the middle of nowhere and teams up with a mysterious wilderness man, Elias Thorne. Things go from dangerous to deadly and the two team up in order to survive—and to keep Elias’s secret out of the hands of some very bad people.

One line? Oh, that’s hard. Like choosing one of my own babies.
I liked this moment, a lot. I think it encompasses the feel of the book pretty well.

Real was this. Mud and sky, snow and rotting leaves. Hot, biting kisses against sandpaper bark, danger and lust and something he wasn’t ready to look at.

Don’t throw away that tracking device, Elias! Sadly, he doesn’t listen. If he had, most of their troubles could have been avoided.

This is a book about trust and personal responsibility in a dangerous world. Heavy, right? And, in a way, I guess it is, although this story’s also funny (at times), adventurous, and very, very sexy. I want readers to come away with hope and the knowledge that love can save the world.

Giveaway: A print copy of Uncharted by Adriana Anders

To enter Giveaway: Please complete the Rafflecopter form and Post a comment to this Q: Uncharted is all about the forced proximity, where Mother Nature forces Leo and Elias to get very close, or die. What are some of your favorite forced proximity stories?

Stranded together in a frozen wilderness,
There’s nowhere left to run…

Hotshot pilot Leo Eddowes is afraid of nothing and no one. So when she’s asked to evacuate a man from the wilds of Alaska, she doesn’t hesitate. But with enemies in close pursuit and the weather turning sour, what should have been a simple mission quickly shifts to disaster.

And there’s only one way out.

When Elias Thorne disappeared, he was America’s most wanted. Now he’s spent more than a decade in one of the most remote places on earth, guarding a dangerous secret. Leo’s arrival, quickly followed by a team of expert hunters, leaves him no choice but to join forces with her—and run. Neither is prepared for their reluctant partnership to flare into something as wild and untamed as the frozen world around them…but as desperately cold days melt into scorchingly hot nights, Leo and Elias must learn to dig deep, trust in each other, and forge a bond as strong as the forces of nature.

ADRIANA ANDERS is the award-winning author of the Blank Canvas series. Under Her Skin, a Publishers Weekly Best Book of 2017 and winner of two 2018 Holt Medallions, has been featured in Bustle, USA Today Happy Ever After, and Book Riot. Today, she resides with her tall, French husband and two small children in France, where she writes the gritty, emotional love stories of her heart.