Hi Joanne and welcome to HJ! We’re so excited to chat with you about your new release, The Rancher’s Bargain! 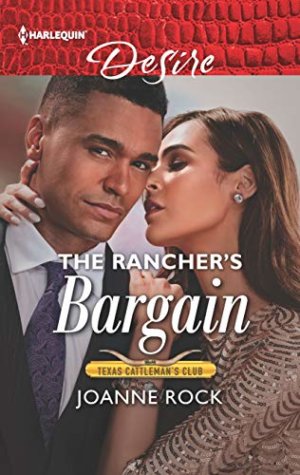 The Rancher’s Bargain continues the “Bachelor Auction” storyline in the Texas Cattleman’s Club miniseries. When Lydia Walker’s sister makes a bachelor auction bid she can’t cover, rancher James Harris quietly makes good on the bid to keep the news quiet. But Lydia won’t let him pay for her sister’s mistake alone, and the two work out a deal where she’ll serve as nanny to James’s nephew. It all makes great sense, until working under the same roof proves too hot to handle!

The opening of this one is fun – It’s okay to say no to unnecessary crazy.

Lydia Walker repeated it like a mantra while she read the digital headline from a story that had run in the Royal, Texas, newspaper earlier in the week while she’d been out of town.

The hero is dazzled by the way the heroine makes his temperamental nephew smile. Making the child turn around a tantrum seemed like a super power to him! And Lydia finds James attractive because of his sense of honor. She grew up always being the responsible and practical one in her family, and she’s attracted to James because he steps into that role.

A childish cry filled the room.
His nephew, little Teddy Harris, came barreling toward him with big crocodile tears running down both cheeks, his wispy baby curls bouncing with each jarring step. The two women stepped out of the boy’s way as he ran straight into James’s leg. Crushing the wool gabardine in damp baby hands, the boy let out a wail that all of Royal must have heard.
With proof of his inadequacy as a stand-in parent clinging to his calf, James had never felt so powerless. Reaching down, he lifted his nephew in his arms to offer whatever comfort he could, knowing it wasn’t going to be enough. The toddler thrashed in his arms, his back arching, kicking with sock-clad feet.
James had all he could do to hang onto the squirming kid let alone soothe him.
Until, miraculously, the child stilled. The two women lingering at the threshold of his office door were both smiling as they watched. James had to crane his neck to see the boy’s expression since Teddy peered at something over his shoulder, tantrum forgotten.
For a split second, he wondered what on earth that could be. Until he remembered the enticing woman in the room with them.
He sensed her presence behind him in a hint of feminine fragrance and a soft footfall on the hardwood floor. It was James’s only warning, before her voice whispered, “peekaboo!” in a way that tickled against his left ear.
Teddy erupted in giggles.
It was, without question, the best magic trick James had ever witnessed. And he knew immediately that there was a way Ms. Lydia Walker could repay him.

when they are looking for a warm-hearted read with steam! This story is very much about building a family– about sacrifice, about putting others first. But it’s sexy, too. If you’re a fan of books with babies, this will be a good read for you.

Currently, I’m writing the third book in my upcoming Mesa Falls Ranch series for Harlequin Desire. The series begins in November 2019, with stories to follow in December 2019, March 2020 and April 2020. But before that, readers can look for my next Texas Cattleman’s Club story, RANCHER IN HER BED, in June. I’ll also be releasing THE PERFECT CATCH, book one in my Texas Playmakers series for Tule, in May 2019.

Giveaway: Joanne is giving away the first three books in her McNeill Magnates series for Harlequin Desire! Open to US and INTL readers.

To enter Giveaway: Please complete the Rafflecopter form and Post a comment to this Q: Do you have any New Year rituals this time of year? Starting a new planner? Certain things you shop for now that the holidays are over?

Excerpt from The Rancher’s Bargain:

Can a bachelor auction gone wrong…
mean temptation for the rich rancher?

James Harris needs a nanny for his nephew—now! So when Lydia Walker’s sister reneges on an extravagant bachelor-auction bid, the Texas Cattleman’s Club president has an idea. He’ll cover the debt, and Lydia will care for the baby. Neither is prepared for the passion that blindsides them. But is a permanent personal arrangement more than they bargained for?
Book Links: Amazon | B&N | iTunes | kobo | Google |

« REVIEW: Nothing Personal by Karina Halle
Spotlight & Giveaway: The Secret to Dating Your Best Friend’s Sister by Meghan Quinn »

75 Responses to “Spotlight & Giveaway: The Rancher’s Bargain by Joanne Rock”