Hi Sawyer and welcome to HJ! We’re so excited to chat with you about your new release, The Rise of Fortune and Fury!

Errrm, the title is The Rise of Fortune and Fury, soooo, maybe let’s do just part of that (contrary to what my occupation may imply, I’m just not that creative!): 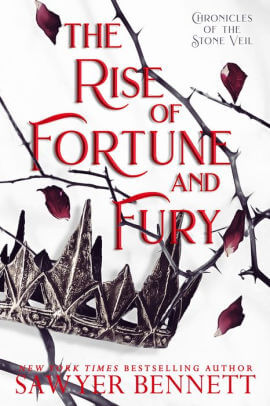 Carrick appeared outside of Arwen’s hut. He was irritated and frustrated because he had failed on his mission to take out a few of Kymaris’ original Fallen who would be used in the ritual.
When he arrived, it had taken him no more than a second to realize something was wrong.

Oh man, there is SUCH a cast of characters in this book! Human and otherworldly, it’s an odd mix that I wouldn’t want any other way. Our heroine, Finley, is human, but she holds some special powers. Carrick, our hero, is not human, but we don’t find out what exactly he is right away. Then there are others, such as Zaid, the grumpy daemon who is always by Carrick’s side, and Finley’s roommates, all of whom are human. Finley is strong, stubborn, and full of sass, while Carrick is distant, secretive, and powerful. He is also immortal, which proves to be an issue between him and Finley.

This series (this is book five) is a sloooooow burn, but once the reader gets to THAT moment, it is so worth the wait. The spark between Carrick and Finley is almost instant, but buried beneath about a million layers of distrust and dislike. His immortality is a huge point of contention, but as the reader learns throughout the series, there is much, MUCH more at play.

The first kiss actually comes a little earlier in this series (book two) in A Discovery of Secrets and Fate. Here’s a look…

“Maybe,” Carrick murmurs, but there’s a biting edge to it. “Just maybe, I didn’t like him touching you.”
“Why?” I manage a whisper.
Carrick’s head dips lower, tilts to the side, and his lips hover right over mine so that when he speaks, I feel his breath. He stares at me, eyes hard and resolute before they drop to my mouth. “Maybe I’m just feeling proprietary.”
I’d jerk my head back from him if the wall weren’t trapping me, so my tone is more than scathing enough to get I don’t like his wording. “You mean… like you own me?”
There’s just a flash of amused smile before Carrick brushes his lips over mine. It’s soft, so subtle, and yet the absolute best kiss I’ve ever had in my life. But then his lips are gone, leaving behind a faint tingle. My skin prickles when I feel his mouth grazing across my jaw, light as a feather.
My eyes flutter shut as I savor the feel of him touching me in a way that is far beyond the boundaries we have set. My heart pounds, my blood races, and I feel like my legs won’t support me, so I press my hands into the wall and dig my heels down into the rug. He’s barely touching me, yet I ache with such deep need I’m afraid I’ll be devastated if it’s not filled.
Carrick reaches my ear where I feel his warm breath, then the butterfly touch of his lips as he murmurs, “You’re not the type of woman who could ever be owned, Finley.”

Prior to the final battle, Finley, Carrick, and their friends all gather for a meal. That’s what I would use, as it shows the bond and comradery within them all.

I know I have to start mentally preparing for the fight ahead. But before that, I need just a little bit more time for one last gathering in the kitchen while Zaid feeds us.
Me, Carrick, Zora, Rainey, Myles, Maddox, Zaid, and Boral.
The Dream Team.
I think I can speak for the group when I say none of us really have an appetite, but we need fuel for the long and arduous hours ahead of us.
As it’s mid-morning, there’s nothing more appropriate than brunch while enjoying these last moments of camaraderie. After, we’ll make the roughly two-hour drive toward Lake Wenatchee, where we’ll set up a good mile out from the ritual site in a deeply wooded area Maddox had scouted. Currently, Carrick has allies stationed around the general vicinity of where the ritual will take place to watch for Kymaris and her forces. They’re hidden in trees or with magical glamours, their only job to watch and report. We have no clue when Kymaris will start to set up, but we want to know as soon as she does.
So far, it’s been quiet.
Zaid lays out an amazing feast—Belgian waffles with fresh cream and strawberries, thick-cut bacon crisped to perfection, two different types of quiche, croissants for Zora, and a variety of cold cuts and broiled tomatoes for a bit of a European flair. We load up our plates, take our usual spots around the island, and eat.
The first bite of bacon stimulates my appetite, especially as I realize this could be my last real meal, the protein bars and electrolyte drinks we’re bringing with us not really counting as more than sustenance.
This gathering is obviously different. We don’t joke and banter. Zaid can’t even gather up enough antagonism to level a glare at Boral.
We are all resigned that we have the fight of our lives ahead of us.
“The condo has protections,” Carrick reminds Rainey and Myles, who will be staying well clear of the ritual for their own safety and our peace of minds. “But if you wanted to head out of town, that would be even safer.”
Rainey smiles with a short nod, but Myles says, “I’ve been working on something for you guys.” He bends to the side of his stool, pulling the canvas satchel he always carries onto his lap. From within, he pulls out a small drone. Way smaller than others I’ve seen people use. He sets it gently on the counter to the side of his plate, then smiles proudly down at it.
“Nice,” Maddox says, pushing up off his stool and moving closer to inspect it.
Myles proceeds to explain the drone and some fancy micro camera he has mounted on it. The beauty of it is in how small it is, which means it’s probably whisper quiet.
“It can be flown over the clearing, and the night vision camera can project live stream right to your phones. In the heat of things, you can get play-by-play through comms. I have earpieces—one for Carrick, Maddox, and Titus.”
“Why us?” Maddox asks, moving back to his place at the island to eat.
I take the liberty of answering because it’s common sense. “You and Carrick are our two strongest warriors. Titus is incredibly battle-tested. The most important ones out there. You can take the information and pivot strategies as needed.”
“What she said,” Myles quips as he cuts into his waffle, taking a big bite.
“It’s amazing,” I commend Myles.
“But who will fly it?” Carrick asks pointedly.
“I will.” Myles and Rainey exchange a glance, and it’s clear they’ve talked about this already.
My tone is hesitant, not wanting to offend. “I’m not sure that’s a good idea.”
“It will be incredibly dangerous,” Carrick adds. “While I’m assuming you can fly that thing some place away from the action, you’d still be close enough to be in danger. You won’t be able to take on the weakest daemon if you’re discovered.”
“Then I won’t be discovered,” Myles replies confidently.

Ooooh, this is a TOUGH one. He’s immortal, so he’s lived a VERY long time. And he’s kind of a hard-ass, but once he shows his soft, loving side….watch out. Those panties will just fall right off! I could totally see him turning on Can’t Help Falling in Love by Elvis Presley, but in the next beat be rocking out to something like Closer from Nine Inch Nails. My man’s got layers!

Sometimes your enemies (and allies) are who you least expect. Pay attention to everyone and everything!

I am turning back to contemporary romance for the remainder of 2021, but fans of the Chronicles of the Stone Veil series can rest easy knowing I’ll have more in that series in 2022! For the rest of this year, look for releases from the Arizona Vengeance and Jameson Force Security. And a possible new series announcement near the end of the year. 😉

Giveaway: Signed paperback of The Revelation of Light and Dark (Chronicles of the Stone Veil, Book #1). US only.

To enter Giveaway: Please complete the Rafflecopter form and Post a comment to this Q: What is your favorite genre to read?

Excerpt from The Rise of Fortune and Fury:

It’s time to meet my destiny.

Kymaris has everything she needs to bring down the veil between Earth and the Underworld. If she’s successful in completing the ritual, Earth will be darkened by evil. Demons will swarm our lands and the human race will be decimated.

My fate is to thwart the prophecy, but I’m not sure what to do. While I may have some gifts, I am still merely a human facing the queen of the Dark Fae who holds unimaginable power.

Deep, abiding love which gives me the strength and courage to face down evil. Family, friends, and unexpected allies, who will stand shoulder to shoulder with me against this enemy. Should I fail, they are prepared to go down with me, but only after we have given our all.

My sacrifice may destroy everything I am. Fate may require my demise. But if that happens, I will leave this realm without regret, knowing that I have loved and been loved in return.

The Rise of Fortune and Fury is book five of the Chronicles of the Stone Veil series and is best enjoyed if read in series order.
Book Links: Amazon | B& N | iTunes | Google |

« Spotlight & Giveaway: Incognito by Katie Delahanty
REVIEW: A Family Made In Rome by Annie O’Neil »

29 Responses to “Spotlight & Giveaway: The Rise of Fortune and Fury by Sawyer Bennett”