Today it is my pleasure to Welcome romance author Julia Bennet to HJ!

Hi Julia and welcome to HJ! We’re so excited to chat with you about your new release, The Ruin of Evangeline Jones!

Hi and thank you for having me. 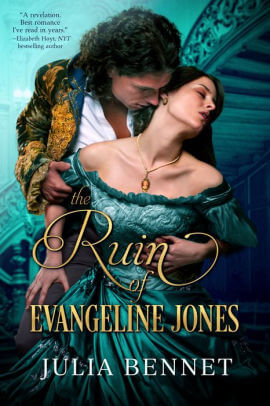 A Duke who exposes charlatans for fun has seven days to expose the biggest fake of all in this enemies to lovers tale.

It began, as so many stories do nowadays, with a duke.
Alex, Duke of Harcastle, managed to keep his face blank despite the stale air, redolent of old cigar smoke and unwashed bodies, in the cramped upstairs room in the Nimble Rabbit. This lowly, rather dirty establishment was not among his usual haunts, but the opportunity to see Miss Evangeline Jones, spiritualist and medium, in the flesh was too tempting.

Alex is attracted to Evie before they ever meet. At the beginning of the story, he has two photographs of her and it’s her provocative pose and “duelist’s eyes” that hook him. As for Evie, Alex is a powerful man who wants to destroy her livelihood, albeit for the greater good. At first, it’s the danger that draws her (she has some self-destructive tendencies to work through).

A challenge he can’t resist.

I have so many favorites but one I can share a snippet of is when Evie comes home alone after refusing to become Alex’s mistress:

“Her heart seized in her chest as someone spun her round.
Harcastle, his hair still disheveled from the rain and her fingers, with a wildness in his expression she’d never seen before. He looked nothing like himself. The duke was just a man as his mouth covered hers in a kiss as wild as he was. Hot and demanding at first, then gentling until his lips were whisper-soft against hers.
“Change your mind,” he said, his mouth drifting to her throat.
She sighed and buried her face against his chest.
“Change your mind, Evie.””

This snippet from chapter one sets up the conflict for the first half of the story. Alex has challenged Evie to put him in touch with a spirit. She goes into a trance and then…

“Boy,” she growled, and her voice sounded different. Deeper. Colder.
The back of his neck prickled when he saw the ice in her expression. This look made her disdainful stare at the beginning of the evening look like a lover’s simper. He hadn’t been the recipient of animosity like this since—
“Boy,” she said again.
His stomach turned over as it always had when he was a child.
He took a deep breath. Just a trick, that’s all. Calm down. It’s all right.
As abruptly as she’d spoken, her head dropped forward until her forehead thudded on the tabletop. The “spirit” had departed.
No matter what, he would not break the circle. He would see this thing through and then he would figure out how she’d done this. He stared at the medium’s bowed head. The center-parting stood out straight and perfect, as if she’d used a ruler and protractor on it. This tiny sparrow of a woman had turned him inside out with a single word. How? How had she done it? How had she known exactly what to say and how to say it? And how–how?!–had she dared?

…alone at night by the light of a lamp. It’ll aid the spooky atmosphere of the séances.

I would love to finish this series one day with Jude’s story, but there are no firm plans in place for that book yet. If you keep an eye on my website or sign up for my newsletter, I’ll let you know as soon as publication plans are made.

Giveaway: One eBook copy of THE RUIN OF EVANGELINE JONES

To enter Giveaway: Please complete the Rafflecopter form and Post a comment to this Q: Enemies to lovers is one of my favorite tropes but I wonder how common it is in real life. What do you think? Comment for a chance to win a free Electronic copy of The Ruin of Evangeline Jones.

Excerpt from The Ruin of Evangeline Jones:

In this scene, Alex and Evie are planning a séance together. She’s been telling him how to tie someone up without constricting their movements so much that they can’t escape. The prospect of a little light bondage has left Alex in a bit of a state.

“It needs to look believable.” She almost asked him to show her, but no. He might enjoy that a little too much and so might she. And then where would they be? “I’ll carry a knife in case.” She spoke with determined nonchalance, yet still his breaths were shallow, his gaze intent. A tremor went through her in response. “You mustn’t look at me that way.”
“What way?” But he knew. She could tell.
Despite herself she stepped even closer. It was like stepping into the light. “It’s only our bodies, Harcastle.” But her voice wasn’t as brusque as she’d meant it to be. “Soon I’ll be gone and you’ll move on to the next obsession. You and I, we’re from different worlds. One day, you’ll look back on this and wonder what you were thinking.”
His hand whipped out and grabbed her wrist. When he smiled, she wanted to kiss it right off his face. Instead she made herself utterly still. He must never know how he affected her.
“Yes, we’re from different worlds,” he said. “Our lives couldn’t be more different. But you and I…” He released her wrist and interlaced their fingers so they were palm to palm, holding hands like sweethearts. “You and I are the same. Devious and distrustful, we expect everyone to lie to us. Perhaps that’s why your moods, your silences, everything you say and do, make perfect sense to me. When I’m with you, only when I’m with you, I’m not Harcastle. I’m not acting a part. And I think it’s the same for you because you feel it too. That despite what’s on the surface, you and I are made of the same stuff.”
Oh, he was ruining her.
His palm rested warm against hers. As messy, sticky emotion rose within her, her heart seemed to swell until it must surely burst with the strength of her feelings. For the first time, she understood what it was to have a full heart.
“Alex,” she whispered, a reproach and a plea. She could bear this so much better if all he wanted was to bed her, if she believed that the true attachment was one-sided. Why must he speak of the bond between them? Didn’t he know that, by acknowledging it, he gave it life? “There’s no point.”
“Because you’re leaving,” he said. “Because I have all this.” He waved his hand, the gesture encompassing not only the room or even the vast, gloomy entirety of Harcastle House, but everything—title, land, duties, dependents.
She shouldn’t pity him for being bound to so much privilege, yet seeing the look on his face, she almost did.
“I have to marry an heiress.” His grip on her hand tightened almost painfully. “If I don’t, I might lose all of it, or at least so much that the title will become a joke. You see, the actual duke himself is nothing. Each one, each generation, is merely a link in the chain. None of this is truly mine. I’m its guardian, and so I must marry a suitable, and suitably rich, woman and make a little lord who will grow up and become another link in the chain.”
“I don’t understand.” Who was it all for if not the duke?
“I’m not surprised.” He laughed bitterly. “It may seem strange but that is how it’s always been. I cannot be the man who breaks the chain and so I am bound by it.” He eased her hand open and kissed the palm, his lips brushing her skin, barely touching. It was a curiously chivalrous gesture and one that was completely alien to her. “But you see, whatever the unspoken rules may be, I am still a man and, from the moment I first saw your face, I recognized something in you.”
He rose from his seat and released her hand. He was about to leave the room and she must allow it. If she didn’t let him go now, she would want to keep him forever. But he had more to say before he went and, whatever it turned out to be, she sensed it would devastate her.
Sure enough, he stopped before he reached the door, though he didn’t turn to face her. “So, no, I won’t forget you when you leave, I will never wonder what I was thinking, and I will always, always be sorry that we were not to be.”
It was both a declaration and a renunciation. She closed her eyes against the pain of both.
When she opened them again, he was gone.

Alex Stanton just inherited a dukedom, but his true passion is uncovering charlatans and frauds wherever he finds them. Spiritualist and medium Evangeline “Evie” Jones is the biggest fake of all, and he’s determined to expose her lies for all of London to see. Her prim manner and ladylike airs don’t fool him. He sees the hunger beneath and recognizes a worthy opponent. He can’t deny the dark undercurrents of lust between them.

Evie worked her way up from the gutter, and she’s not about to abandon the life she’s built for fear of this aristocratic dilettante. She knows his type. She sees the attraction simmering beneath his animosity, and she knows how to use it to keep him off balance. They strike a bargain. He has one week to prove she’s a fake. If he fails, he has to abandon all further attempts. If he succeeds, she’ll not only retire but make a public statement explaining all her tricks.

Neither expects to find anything in common, not to mention anything to love, in the other. Both are blindsided by the affinity and blossoming tenderness between them. But even if it were possible for a lowly charlatan to live happily ever after with a duke, more is going on than either suspects. Someone else has brought them together for a sinister purpose of his own.
Book Links: Amazon | B&N | iTunes | Goodreads |

Julia writes historical romance with passion, intrigue, dark humor, and the occasional animal sidekick. A tea-sodden English woman, she’s the only girl in a house of boys and yearns for all things pink and fluffy. If she isn’t writing, she’s probably reading everything she can get her hands on, spending time with her boys or procrastinating on the internet.
Website | Facebook | Twitter | | Instagram |

« REVIEW: Not That Kind of Guy by Andie J. Christopher
Spotlight & Giveaway: Temper by Chantal Fernando »

21 Responses to “Spotlight & Giveaway: The Ruin of Evangeline Jones by Julia Bennet”