Today it is my pleasure to Welcome author Ieshia Wiedlin to HJ!

Hi Ieshia and welcome to HJ! We’re so excited to chat with you about your new release, There You Are! 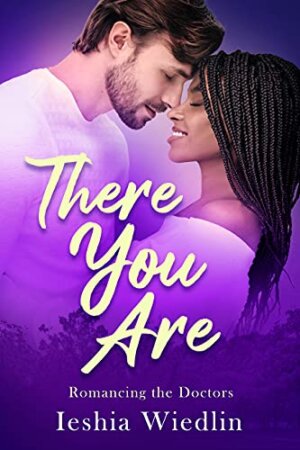 This is a second chance at love story. Amina Wright is my main character, who is incredibly hardworking, and has all but given up on love. Dr. Nathan Moore strolls into her life, and the attraction between the two is immediate, but Amina isn’t sure that she can accept being with him despite the fact that he is so incredibly charming and caring. Their cultural differences are a huge challenge that she’s not sure if she can overcome. Amina is also haunted by her past, and when that clashes with the present, giving up on love is a pretty good idea.

“I’m sorry for what Shawn said. He can be such an asshole.” “Yeah, that’s been my experience. But, it seems like you’re not that kind of guy. I mean, not too many assholes are coming up to save women from unsavory guys. They are the unsavory guys.”

“Just a little nervous. How are you feeling?” “I’m trying really hard not to, but I’m freaking out a little bit.” She chuckled. “I mean, they have this amazing, compassionate, feminist, and socially aware son. As long as they’re not horrible, raging racists or sexists, I think things will be fine.” She laughed.

I like both of these lines because they both show how much Amina can’t deny how great Nathan is, and how much she has to fight herself to enjoy the clear chemistry she has with him.

I wanted to write a story with a little different take on interracial relationships. I have read several books, and they all seem to go on without a difference or struggle or with very little acknowledgment of the differences, and that didn’t seem very realistic. It felt like that story should be told with a lot of heart, and humor. But also, with care, and sweetness.

Amina Wright is a kind woman, who is quite sweet, and funny, but she’s had some struggles with relationships, and a lot of pain, who has sort of given up on love because of past hurts, and she can’t find someone who is checking all the boxes of what she needs.

Dr. Nathan Moore is just a really good kind man, who always wants to do the right thing. And he too has also been hurt, and is not up for any kind of relationship, the way his previous relationship ended, has kind of soured him on stepping out and taking a chance.

The closer they got within their relationship, the more I got to know them.

My favorite scene to write is the moment Amina first lays eyes on Nathan, when he comes to her rescue. He catches her completely off guard, and she was a willing and ready participant. The chemistry between them is instant and jumps off the page.

She cocked back her hand as a handsome man approached them. “There you are. I was looking for you everywhere. You did such an amazing job up there.” Nathan smiled. Amina was stunned but she’d play along to get this creepy guy away from her. “I’m right here.” Her voice wasn’t her own. She tried to look this handsome stranger in the face but didn’t want to stare. He was tall, with fluffy dark hair that connected to his beard. “Thanks for grabbing me a glass of wine.”

One of the most difficult scenes is the moment Amina gets a call about her father, and him being rushed to the hospital. They are very close, and in that moment you feel her fear and worry. Everything that comes after this moment was difficult.

It was three a.m. when her phone rang. She looked at the screen and saw that it was Amir. “Mir, what’s wrong?” “Dad! He stopped breathing. He’s at the University of Chicago Hospital. Meet you there.” “Okay, on my way.” “Drive safe.” Amina’s heart raced. She jumped out of bed and tried to creep, but he was awake.

I think my writing style is one that incorporates real life experiences, with moments of humor and heart. I want readers to feel connected to the characters to see themselves or see moments that they can relate to while they go on a journey with the book.

My second book release with Tule Publishing is the second book in the Romancing The Doctors Series, It’s called Maybe This Christmas. That comes out October 25th of this year. Currently I am working on the third and final book in the series.

Giveaway: An ebook copy of There You Are & 3 Tule ebooks

To enter Giveaway: Leave a response to this Q: If you are at a party, and someone who are you not interested in comes up to speak to you, who do you wish would come to your rescue?

Excerpt from There You Are:

It’s love at first sight…but can it be love forever?

Amina Wright loves her job in community outreach for the Chicago Bulls NBA team, but life has taught her to be wary of players. So she’s not sure what to expect when a good-looking anesthesiologist smoothly cuts in at the charity gala she’s hosting and handles the womanizing jerk trying to waste her time. Certainly gratitude is in order—but a relationship? Not on the table.

Dr. Nathan Moore doesn’t have time for a relationship, especially not a complicated one. He can’t believe he let his friend drag him to some fancy event, and he certainly wasn’t expecting to rescue a beautiful woman as a distraction. But now he wants to spend more time with Amina, even if most of his waking hours are devoted to the hospital.

Indulging in a relationship that sizzles their blood is the easy part. But her past threatens his career’s future, and their cultural differences are putting stress on the present. Can they build a love strong enough to heal both their hearts?

Ieshia Wiedlin grew up in Detroit, Michigan, and currently resides in Brookfield, IL, which is a suburb of Chicago. She is married and has two great kids, Lucas and Zoey. She has always loved writing and telling stories, mostly sci-fi and fantasy, and is a huge junkie for all things Marvel and Star Wars. But somehow in the midst of loving all things sci-fi, she was a sucker for all things Molly Ringwald. Ieshia became a huge fan of rom-coms and loves stories with strong women characters. Growing up the youngest, and the only girl on her block, she craved strong women who fell in love. She loves romances with strong women leads who have conviction, but are also filled with humor. It’s important to her that women in her stories are smart, strong, loving, and funny, and also represent for sci-fi geeks and music lovers everywhere.
Website | Facebook | Twitter | Instagram | GoodReads |

« REVIEW: With Love from London by Sarah Jio
Spotlight & Giveaway: A Perfect Equation by Elizabeth Everett »

13 Responses to “Spotlight & Giveaway: There You Are by Ieshia Wiedlin”