Today it is my pleasure to Welcome author Sidney Bristol to HJ!

Hi Sidney and welcome to HJ! We’re so excited to chat with you about your new release, Traitor Games! 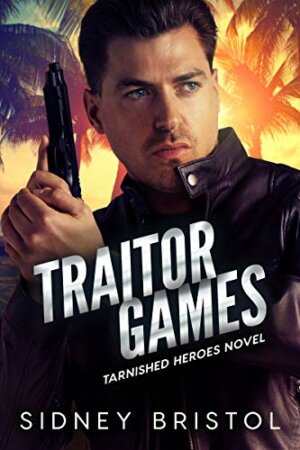 When I think of how to describe Traitor Games I tell people to think about the Jason Bourne movies, only Marie lives and they have really great sex.

Whoever had taken the picture caught her in a moment of surprised laughter. He’d heard that magical sound a few times, but mostly she just glared at him. He couldn’t really blame her. He had dragged a dead body through her office.

This really makes sense if you happen to have read Assassin Games, the second Tarnished Heroes book. Noah and Lillian were secondary characters in that story and this is literally how they met. Isn’t that going to be a fun story to tell their kids?

I wrote the bulk of the middle of this book while in the UK crewing for a cycling race my mother was taking part in. I was sleeping, working and living out of a hatchback car. I think it helped me capture some of the European flavor a bit better had I just been imagining it in my own office at home.

With Lillian, it was how good of a friend she was to Carol in book two. We all want that girlfriend who is with you through thick and thin. Lillian is that girl. She’s your ride-or-die girlfriend! I think how a heroine treats other women is important and tells you a lot about who they are.
Heroes, let’s be honest, it’s that first gut-punch moment they see the heroine and they just know she is it. Noah gives that to you in the first scene when he, well, I can’t tell you since it’s a spoiler. You’ll have to read it for yourself!

With this book, I think that was The Chair Scene. I wound up having to write it while sitting on the floor of a school cafeteria with a bunch of sleeping cyclists laying all around me.

He took a step toward the bed. His foot caught on something and he stumbled, dropping Lillian into the same green chair she’d sat in before.
She sputtered a laugh, not the least bit bothered, and grabbed handfuls of his shirt, pulling it up over his head. He knelt on the floor in front of her and kissed her breasts and down to her stomach.
“Noah…” She tugged on his hair, but he ignored it.
This was worth doing right.

You should totally read this book if you’re into edge of your seat, nail-biting romance.

Right now I’m writing the fifth and final book of my Aegis Grop Lepta Team series, a spin-off of the main Aegis Group line. It’s called Dangerously Entwined and is the story of what happens when two bodyguards working on the same team fall in love with each other. It releases August 13th. Readers can visit SidneyBristol.com to grab a complimentary copy of the first book in the series, Dangerously Taken.

Want to see where the Tarnished Heroes series began? Grab a complimentary copy of my short story, Once Upon a Time in Mukdahan, here: https://dl.bookfunnel.com/trfdgd62iv

To enter Giveaway: Please complete the Rafflecopter form and Post a comment to this Q: Where’s a place you never wanted to visit until you read about it? Have you been? Will you go?

Lillian locked her front door and made a circuit of the living room, closing the blinds and pulling the curtains, shutting out the rest of the world. Sometimes she wished she could tune out, stop being involved, hide, but that would solve nothing.
Her stomach twisted and growled like a living thing.
Had she eaten today?
Cooking was out of the question. She was worn out, and still had so much to do, so something microwaveable it was.
Lillian unbuttoned her jacket and laid it over the back of the closest dining chair. She needed to check over the plans for work before her sister, Camilla, called, and after that chat Lillian could begin really working. If she got to bed before two it would be a good night.
She pulled the freezer door open and stared at the options.
“That pesto pasta thing is pretty good.”
The sound of a voice, a male voice at that, in her home when she should be alone sent a surge of panic coursing through her veins. Lillian gasped and whirled, clutching the first dinner she could grasp to her chest.
A pair of blue eyes twinkled at her. The light glinted in his blond hair. He sat on the bar stool across from her, as though she’d walked past him and hadn’t seen him. She was certain he hadn’t been there a moment ago. Then again, Noah White did take great pleasure in being a pain in her ass. Kind of like the boys in grade school who used to pull her hair.
“Jesus. What are you doing here?” Lillian slammed the freezer door shut, equally angry with him and frustrated with herself. How had Jesse missed a whole person?
“Laundry. My washer is busted.” A dimple creased his cheek on one side of his mouth. His very kissable mouth. The same one he used to say things that made her want to slap him. Most days she wanted to do both.
“That’s what a Laundromat is for.” She ripped the package open, taking her irritation out on the cardboard.
“But then I wouldn’t get to see your pretty face.”
His smile put her at ease, even when she knew she shouldn’t allow him to lull her into a false sense of safety. It grated on her nerves, but she had to give him credit. He was damn good at his job if he could get her to trust him when she knew better. She dealt with liars on a daily basis. “You could just google me if that’s what you wanted,” she grumbled and crossed her arms over her chest.
“Nothing like seeing the real thing.” He winked at her and damn if she didn’t want to chuckle. He was good.
“Why are you here?” she asked again.
“I wanted to catch up. See what’s going on.” He spread his hands. “I’m totally out of the loop here.”
Lillian stared at him.
He pointed at the microwave. “You know you have to press the ‘start’ button, right?”
She pivoted and jabbed the numbers. And pressed start.
She braced her hand on the counter and stared at him. “I’ll ask you again—why are you here?”
He shrugged and leaned on the bar. “There are a lot of jobs coming down the pipeline. Curious what everyone is doing.”
She returned his smile. “I don’t know what you’re talking about.”
Noah wasn’t on her roster. Yes, he’d helped save her best friend’s life, but he wasn’t part of their team. His call. She had offered. And that left her with questions.
He slid off the stool. “What kind of music do you like?”
“Noah.”
He crossed into the living room. “I couldn’t help but notice this really cool sound system you’ve got here. I’d love to give it a go.”
She followed him as far as the arch. “I do not want you here, do you understand?”
More accurately, he would be a distraction. He’d tease her. She’d end up laughing even though she knew better.
“I’ve developed a real appreciation for dubstep. You listen to the stuff?”
She followed him across the living room. “Dub—what?”
“Dubstep.” Noah grinned and mashed the buttons on the remote.
A throbbing beat set against the trilling sounds of an electronic synthesizer blared from the speakers.
Lillian clapped her hands over his ears. She growled her frustration at him, but the sound was drowned out by the godawful stuff he called music. How could he be so obnoxious, dangerous, and charming? It wasn’t fair.
She tried to snatch the remote, but Noah grasped her wrist and stepped in close. The jovial smile was gone. He stared at her with all the feeling of a statue. Those sparkling eyes of his were bitterly cold, his fingers so tight they made her wrist ache and her little finger throb.
She froze, suddenly feeling like the rabbit caught in a trap. Noah was dangerous. She could never forget that.
“My handler wants me to kill you,” he said just loud enough for her to hear over the music.

Noah White has done a lot of bad things for the CIA, but this time they’ve crossed the line. He knows the kill order he’s been given is a set-up and the intended target is another covert agent. They’ve finally found a line Noah won’t cross. Not with her.

Lillian Matthews is living in the crosshairs and she knows it. While her friends are spread out over the globe gathering intelligence on a rogue covert agency, it’s her job to keep them all connected. Only now she’s the target. And her unlikely ally is the last man she’d expect.

Lillian will have to make the biggest sacrifice of her life, because Noah will stop at nothing to protect her.
Book Links: Amazon | B&N | iTunes | kobo |

It can never be said that NYT & USA Today Bestselling author Sidney Bristol has had a ‘normal’ life. She is a recovering roller derby queen, former missionary, tattoo addict and board game enthusiast. She grew up in a motor-home on the US highways (with an occasional jaunt into Canada and Mexico), traveling the rodeo circuit with her parents. Sidney has lived abroad in both Russia and Thailand, working with children and teenagers. She now lives in Texas where she spends her time writing, reading, playing board games and catering to her furry overlords, aka the cats.
Website | Facebook | Twitter | Instagram | GoodReads |