Hi Samanthe and welcome to HJ! We’re so excited to chat with you about your new release, Undercover Engagement!

Hi! I’m thrilled to be back! 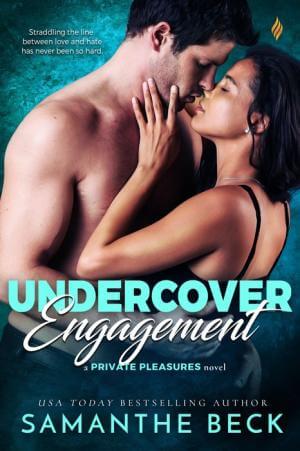 When by-the-book cop Eden Brixton is partnered with smooth-talking wild-card Marcus Swain for an undercover sting, straddling the line between love and hate has never been so hard!

“Yes, sir.” Cadet Eden Brixton’s pulse took a quick,
ready pounce. She spared a glance at the classroom door before stepping to the front of the semicircle of fellow students completing the twenty-week basic training academy at Kentucky’s Department of Criminal Justice. Instructor McMasters acknowledged her with a brisk nod and resumed inspecting the class roster on his clipboard in an effort to pair her with another cadet for the frisk exercise.

My first instinct was to say they weren’t attracted at first. They disliked each other practically on principle . But then I thought about the way they described each other in the early chapters and realized that wasn’t quite true.

Eden says of Swain, “He was creative, which she could admire, and unpredictable, which she distrusted, but it was his occasional flashes of insight that really troubled her.”

Swain says of Eden, “Though it shocked the shit out of him, her unapologetic ambition and single-minded commitment to her training appealed to him. If Brixton was on your six, your six was fucking covered.”

Ha! One of my favorite scenes!

Swain cleared his throat. “Us, undercover together? It won’t work. She can’t sell her end of it.”

Now she spun fully to him. “What is your problem?”

“Nobody’s going to believe you like me, choux, much less want to spend the rest of your life with me.” He threw the nickname in just to nudge her past pissed to righteously pissed. “You’re not that good an actress. Need me to prove it?”

Her chin came up. Her eyes flashed green. With a voice that could freeze a man’s balls off from fifty feet, she issued a challenge. “I’d like to see you try.”

Resisting Cadet Eden Brixton was a full-time occupation under normal circumstances, but when she went stone-cold bitch on him, he was a goner. Two steps closed the distance between them. He cupped the back of her head, tilted her face up, and covered her mouth with his. For one glorious moment, she stood stock-still, offering the soft, heady heat of those lips that had played a starring role in his jack-off fantasies for damn near twenty weeks. Then she tore them away, cocked an arm back, and threw a punch that landed hard enough to spin his head around.

Be still my aching heart.

Luckily, his heart was a lost cause, pretty much from birth, but he slowly straightened and worked the ache out of his jaw. When he was sure it wasn’t dislocated, he addressed the room in general. “See?”

Malone raised his bushy eyebrows. “See what? Looks like true love to me.”

I have a LOT of favorite scenes between Swain and Eden, but to share one that isn’t completely #NSFW, I’ll go with the one where Eden unveils her nickname for Swain…

Swain offered Brix a grin. “We here to thumb-wrestle for the number-one spot, choux?”

“Keep your thumbs to yourself, cooyon,” Brix muttered. “My number-one slot isn’t up for grabs.”

The tension in his chest eased a bit at the debut of her new nickname for him. Cooyon. Fool. Dumbass. As endearments went, the average guy might find this one less than encouraging, but he recognized the pains she’d taken to research the perfect insult. He wasn’t above complimenting the effort. “You look that one up just for me?”

“I learned it from your mom,” she replied, then turned her attention to the commander.

Oooh. That’s a tough one! Mostly because Eden and Swain are undercover together for a reason, and that storyline sort of drives everything. I guess I’d say their first time out together, at a local bar called Rawley’s Pub, trying to make their cover relationship look real. Here’s a peek to let you judge how they did!

They spent the next few moments in silence, slowly swaying to the music. Her body felt close to heaven against his. They fit together like she’d been made for him. Or he for her. Like they’d been made for each other. He let his hands roam over the curves of her hips and justified it on the grounds of their cover. “Impressions tonight?” he whispered in her ear.

“Primarily? That you’re going to lose your hands if you keep that up.”

“Just doin’ my job.” He cupped her ass and hauled her closer. “Makin’ it look like we can’t keep our hands off each other.”

She raised her eyebrows. “Two can play this game, cooyon.” Her hand took a slow slide down his spine to snuggle into the back pocket of his jeans, which had a predictable effect on body parts much closer to his front pockets.

This seduction might be staged, but as far as his body knew, it was as real as it got.

To experience the sexy fun of two polar opposites with loads of chemistry and very little trust trade insults, hilariously one-up each other and, ultimately, fall in love.

I’m working on a new book set in the rugged, fictional town of Captivity, Alaska. It’s a fake relationship story featuring a fish-out-of-water heroine, a growly bear of a hero, and a whole town full of characters determined to get these two to a happy-ever-after…in Captivity!

Giveaway: I’ve put a signed, print copy of WET AND RECKLESS up for grabs, so one lucky U.S. resident winner can see the first moment Swain and Eden share the page and watch the sparks fly!

To enter Giveaway: Please complete the Rafflecopter form and Post a comment to this Q: UNDERCOVER ENGAGEMENT is an opposites attract story, an enemies-to-lovers story, and a fake engagement story, but it’s also a workplace romance. It’s kind of a fraught thing and some employers frown on it, but the heart’s gonna do what the heart’s gonna do! How about you? Have you ever dated someone you worked with?

“What it’s going to be like when I fuck you deeply and thoroughly—the way I neglected to do last night. Aren’t you wondering, too?” His breath caressed her cheek, and she very nearly shivered.
Oh, yes. Yes, she did wonder. She’d spent the better part of last night wondering so much she could barely stand to be in her own skin this morning. “No. Nope. No wondering here.”

His eyes crinkled at the corners. “Liar.”

“Touché, but you’ve got a lot of little tells.” He lightly touched the hollow of her throat. “Like this right here.”

“It’s a fast pulse. It says you’re amped up, as someone gets when she’s not a good liar. It says…hold on”—he turned and put his ear close to her throat—“it says, ‘Eden’s wondering.’”

“Eden is not wondering—”

“Shh.” His hair brushed her throat as he pretended to listen, causing a sensation so exquisite she couldn’t hold back the shiver. “It says, ‘Eden’s wondering what it would be like if I stripped us both naked and ran my mouth all over her body. Eden’s wondering if she could boss me around a bit, tell me where to linger—where to use my lips, where to use my tongue, where to be so gentle she can barely stand it, and where to be so rough she wants to scream.’”

He took hold of her arms, just above her elbows. Not forcefully—she could definitely slide out of his grasp—but like a request. One she couldn’t find the strength to refuse.

“Eden’s wondering if I’ll beg her pussy for a chance to make up for being so selfish last night. Will I beg with my lips and tongue? Will I beg fast, or slow, or keep her guessing? Most importantly, will I beg for as long as it takes?”

Eden was going to melt into a puddle on the kitchen floor.

He drew back so their noses nearly touched and inhaled deeply. “Yes.”

His eyes were hypnotic. So blue. “Yes?” she murmured.

He swept the pad of his thumb over her lower lip. “Yes, Eden, I will beg for as long as it takes.”

Buttoned-down police officer Eden Brixton is less than thrilled when she’s partnered with smooth-talking wild card Marcus Swain in an undercover op. Both their careers hinge on convincing folks in tight-knit Bluelick, KY that he’s the love of her life. She’d sooner tase him than prance around in practically nothing, hanging all over his chiseled body like she can’t get enough.

For Swain, being partnered with the too-gorgeous-for-his-sanity Eden promises to test his well-honed control. She’s smart, she’s skilled, she’s not just by-the-book—she knows the damn book backward and forward. And she hates his guts.

When Eden absolutely nails her role as his sexy fiancée—where the hell did she learn to seduce with a single glance?—Swain is knocked right on his ass. Living with a temptation like Eden makes it hard to remember their chemistry is strictly for show. And when the heat gets too real, doing the undercover op might prove to be their un-doing.
Book Links: Amazon | B&N | iTunes | Goodreads |

« Spotlight & Giveaway: In Harmony by JN Welsh
REVIEW: The Princess and the Pediatrician by Annie O’Neil »