Today it is my pleasure to Welcome author Susan Lute to HJ!

Hi Susan and welcome to HJ! We’re so excited to chat with you about your new release, Wanted by the Marshal! 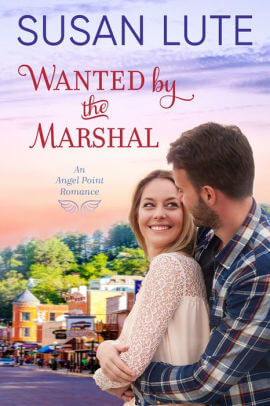 Wanted by the Marshal is the second book in my Angel Point Romance series. The books in this series are sweet, small town cozy romances set in the Oregon coastal town of Angel Point. U.S. Marshal Dakota James comes to town, her mission: talk her sister out of marrying the man everyone describes as the playboy Doc. She finds them having lunch at The Chowder House. How was she supposed to know the man lounging across from Taylor wasn’t her sister’s fiance?

Beckett Leland, a former Marine helicopter pilot, didn’t come to Angel point to find a wife. But the minute he laid eyes on Dakota James, as she marched across the restaurant and accused him of being someone else, he knew there was something very special about this U.S. Marshal. Dakota doesn’t believe in love or happy-ever-afters so it’s going to take some adroit maneuvering on his part and time spent with his retired medical service dog, Tucker, to crack open Dakota’s defenses.

He sees nothing wrong with a little bribery. “I’m ordering dessert. Warm apple pie with a scoop of vanilla ice cream on the side. Want to join me?”

I’ve always wanted to write about sisters who came from a troubled childhood, and the path they might take to finding themselves. The journey. I’m fascinated by that. And what if these two sisters come from a long line of U.S. Marshals that could be traced back to the time of George Washington and the original thirteen Marshals. And what if these sisters, tough women with tender hearts, couldn’t get a date to stay past the appetizers? Well, I just had to write their stories.

Back in the day when I first started seriously writing to be published, I almost always knew the beginning of the story and the end. All I had to do was sit down and write. These days I do what I call a discovery doodle. The doodle takes about three to four weeks to organize. When I start writing I know the main characters pretty well, and the beginning, middle, and end of the story. I generally can’t start writing until I have a picture in my mind of what their happy-ever-after looks like.

Even with all this pre-work, I’m still surprised, because nothing is written in stone. Dakota thought she had all the answers. I knew she loved her baby sister, Taylor. I was completely taken by surprise at the lengths she’d go to talk Taylor out of making the mistake of marrying a man who couldn’t possibly be good enough for her. Taylor was no pushover. And the sisters were so different. It was fun getting to know that about them. Beckett, on the other hand was a guy every girl could have fantasies about. He’s a former Marine Viper helicopter pilot, who was one of the lucky ones; a warrior with a noble heart; from page one, he was always all about paying it forward to other veterans. I love that about him.

Not surprisingly, my favorite scene to write was the first one between Dakota and Beckett.

Irritation—definitely irritation, not attraction—took her by surprise. A flirty grin spread across his handsome face. Before she could put a kibosh on her runaway thoughts, Dakota actually thought cute . . . on the market? Yum!
OMG! What was she doing? And was the dude actually sending I like you, let’s play vibes to his fiancé’s sister? He definitely didn’t have that bored look on his face any longer.
Her heart skipping more than a beat or two, she gave herself a mental hand slap and crossed the intervening space, only stopping her outraged march once she reached Taylor’s elbow. Sisters did not poach each other’s guy!
She sent Adams a glare that in her drill sergeant days had made raw recruits shiver in their new combat boots. After silently promising she’d never think of him as a hunky, sexy guy again, she opened her mouth to extricate her sister from this . . . this . . . playboy’s clutches.
Her sister waved a hand at Adams. “This is—”
“You can’t marry this . . . this guy,” Dakota blurted.
“Beckett Leland,” Taylor said at the same time.
“I certainly hope not,” a male voice behind Dakota joined in. “Especially since she’s already engaged to me and it’s against the law for a lady to be married to two guys at the same time. A sheriff should know better.”

The hardest scene to write was that dark moment when Dakota left Beckett behind. I didn’t want her to do that, but this was her story, not mine.

She backed away from the man with whom, for a short time, she’d fooled herself into thinking she could share a future.
Not his fault she’d told herself a lie. It was hers. What was she thinking? She wasn’t built for a family and keeping them safe. How could Beckett possibly love a woman who couldn’t keep their children out of harm’s way?
“Kodie—?”
Tears slid down her face. Tucker laid down at her feet. Unable to speak, she gave him the hand signal to stay. Desperately needing to get away, without looking back—it would completely break her if she did—she walked out of Beckett’s life.

I think writing styles are a little like fingerprints. There are no two authors who write exactly alike. And most of our stories have the same core in them. This book is probably the story I always tell…family, community, and the journey home. An Angel Point Romance is sweeter than the stories I have previously written and a new pivot toward small town cozy romances, but I’d say my writing style is still basically the same.

It sounds a little cheesy, but I hope the takeaway from all my books is that we should be the ones to write our own stories; that love is a real thing; and that the journey is worth taking. Hopefully, taking the journey with Dakota and Beckett will be totally worth it.

After Wanted by the Marshal, the next Angel Point Romance is The Christmas Makeover which is coming out in October 2020. I can’t wait for you all to read it. Right now I’m working on the discovery doodle for the first of two small town cozy romances. These books will be set in a river town in Oregon and features our hero and heroine, four elders from the local book club, and a soon to be opened tea room. Beyond that, we’ll see.

Giveaway: An ebook copy of Wanted by the Marshal & 3 Tule ebooks of your choice

To enter Giveaway: Please complete the Rafflecopter form and Post a comment to this Q: Thank you so much for chatting with me here at HJ. In this time of sheltering at home, for a chance to win an e-copy of Wanted by the Marshal, tell me below, what is your favorite date? Get comfy on the couch with popcorn and watch a movie on the big screen with your sweetie? Take a walk in the garden together? Put together a 3D puzzle? My favorite is playing Yahtzee with my sweetie.

Excerpt from Wanted by the Marshal:

She doesn’t believe in happily-ever-afters…

Summoned to Angel Point for her sister’s bridal shower, U.S. Marshal Dakota James‘s plan is to make sure her sister doesn’t make the same mistake their parents did. But her quick in-and-out mission gets derailed when Taylor won’t listen and instead tries to introduce Dakota to every member of the single male population in Angel Point. One former marine in particular sets off life-changing fireworks that tempt her to reconsider her single status.

He wants to be more than friends…

Beckett Leland came to Angel Point to check on his cousin’s widow and young boys and found a quiet, out-of-the-way town where he and his retired military dog, Tucker, could peacefully make the transition to civilian life. What he doesn’t count on is running into a fiery, passionate woman who doesn’t believe that love and happy endings are possible. But he wants more than friendship from the marshal who has taken his heart into custody.

Can he convince her that true love is real and their happiness waits just around the corner?

Susan is an award winning author of contemporary romance, women’s fiction, and dystopian romance. Like all children of military families, she spent her childhood moving from one duty station to the next. She likes to say she is first and foremost a wife, mother, sister, daughter, friend, dreamer, and novelist. These days, when not working as a Registered Nurse, she remodels her house and writes whenever she can.
Website | Facebook | Twitter | Instagram | GoodReads |

21 Responses to “Spotlight & Giveaway: Wanted by the Marshal by Susan Lute”