Today it is my pleasure to Welcome author Kait Ballenger to HJ!

Hi Kait and welcome to HJ! We’re so excited to chat with you about your new release, Wild Cowboy Wolf! 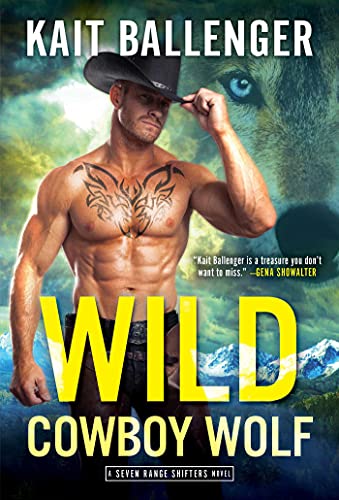 Wild Cowboy Wolf is the fifth book in my Seven Range Shifter paranormal romance series about sexy heroes who are cowboys by day, wolf shifters by night. It’s a spicy best friends to lovers romance about a sarcastically funny alpha hero who uses humor to hide his dark past and the loyal pack-veterinarian/warrior heroine who has always stood by his side, as they fight to protect their pack.

It’s so hard to choose, but for the sheer, goofy humor of it:

“Put down the bull semen and look at me goddamnit.”

The hero, Blaze, has a cantankerous tortoiseshell cat named Peaches, and Peaches was heavily inspired by my husband’s old cat, Coyote.

They’ve been friends for a long time and Blaze has really been in love with Dakota from when he first met her, but I think it’s her kind and loyal heart that he loves the most. He knows she won’t ever leave him alone in his own darkness, which is also what makes her such an amazing friend.

I laughed a lot while writing this book because Blaze is such a sarcastic goofball of an alpha hero, but I also cried a lot, because Blaze uses his humor to hide a very hurt heart. There was one scene in particular that made me cry very hard, but I can’t share it without giving away spoilers. All I can say is that I promise there’s a HEA full of hope at the end.

If they like sexy paranormal romance, cowboy wolf alpha heroes with dark pasts, heroes who hide their emotions behind humor, heroines who are loyal, intelligent, and fierce, and stories where the characters overcome the challenges of their past with the help of their family/community/pack.

I can’t share what I’m working on at the moment because it’s top-secret, but I do have two upcoming releases.
-Shifters and Mistletoe (a holiday wolf shifter anthology featuring novellas from 8 premiere paranormal romance authors, including yours truly) – Out Dec 7th
-Cowboy Wolf Outlaw (#6 in the Seven Range Shifter series) – Out June 28th, 2022.

To enter Giveaway: Please complete the Rafflecopter form and Post a comment to this Q: Which trope do you prefer: enemies to lovers or friends to lovers?

Even with her help, this wolf shifter can’t outrun his past…

Dakota Nguyen has everything she ever wanted–an appointment as one of the Grey Wolf pack’s first female elite warriors, a vibrant career as the ranch veterinarian, and a chaotic, endearing family. When the daily grind gets lonely, her best friend Blaze always knows how to cheer her up. But lately, she has a feeling that there might be something more between them.

One of the pack’s elite warriors, security technologist Blaze Carter is as smart as a whip, quick to joke, and fast on the draw. But underneath his witty exterior, Blaze harbors a dark secret, and fears the day when his demons catch up with him. Unwilling to put his pack at risk, Blaze keeps his secrets to himself and his pack at arm’s length–except for Dakota, who has managed to sneak into his heart.

But even as friendship turns to passion, a hidden enemy threatens to destroy the pack and all that Blaze and Dakota fight so hard to protect. Now, to act on their desires could have deadly consequences…
Book Links: Book Links: Amazon | B&N | iTunes | kobo | Google |

Kait Ballenger is the award-winning and bestselling author of the Seven Range Shifter paranormal romance series, where she weaves captivating tales of dark, sexy heroes who are cowboys by day, wolf shifters by night.

When Kait’s not preoccupied writing “intense and riveting” paranormal plots or “high-voltage” love scenes that make even seasoned romance readers blush, she can usually be found spending time with her family or with her nose buried in a good book. She lives in Florida with her husband and two young sons.