Today it is my pleasure to Welcome author Laura Brown to HJ!

Hi Laura and welcome to HJ! We’re so excited to chat with you about your new release, Wrong Number! 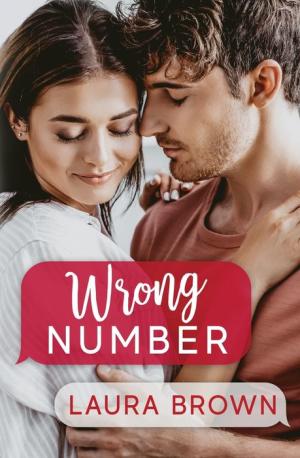 Lonely after moving to a new area for a new job as a cupcake baker, Avery receives a NSFW wrong number GIF and strikes up a conversation with her texter. She revels in flirting with a stranger, not realizing she’s talking to her new boss’s son, aka the man she’s started dating.

There are so many lines I absolutely love in Wrong Number. The banter between Avery and Jake is so much fun and here’s an example of that.

Me: Technically, I got your number by magic.
Wrong Number: Magic?
Me: Cosmic interference?
Wrong Number: Stubby fingers and a bad memory?
Me: Hey now.

This book features a dick GIF sent to a wrong number. The idea first sprouted when someone on twitter decided to at me a full body nude selfie. Not a fun experience that unfortunately so many of us have had. BUT, it got me thinking, wondering how something like this could be a positive experience, rather than a negative experience, and thus Wrong Number was born!

Avery is a baker. She’s hard of hearing like I am, and loves baking, believing she wants to open a bakery of her own one day. Jake is a hairdresser and I loved writing a hero in a non-typical career. He also has a limp due to injuries sustained in a fire, and while I don’t have firsthand experience with this like I do with Avery’s hearing loss, I enjoy writing disabled characters who find love and happiness. As for getting to know them: I’m very much a writer who gets to know her characters as I write my first drafts. They slowly come out of their shells and tell me who they are, so by the time the draft is finished, I can go back and strengthen the beginning parts of the novel.

My favorite scene to write was the reveal scene. Avery and Jake first meet by anonymous text, then in real life. It takes them awhile to realize their connection and it was so fun to finally get to that moment!

The back door required a good push, and soon the fresh air greeted me. I turned when my purse threatened to get caught, and when I resumed my forward trajectory I crashed into a hard body. Again.
I looked up at Jake. “We’ve got to stop meeting like this.”
Only he had swapped expressions with his mother.
“Is something wrong?”
He took a step back and ran a hand through his hair. Unlike every other time he’d done that, the ends now stuck up in odd angles rather than fell in perfect waves. “I entered your number into my phone.”
“Okay?”
He met my eyes. “I already have your number.”
“How?” Did Hannah swipe it from my file and enter it?
A nervous laugh worked out of him and his cheeks turned pink.
“Why don’t I show you?” His hands flew over his phone, eyes boring into mine. He checked once then was back on me when my phone buzzed.
Dick Guy: This is Jake.

Wrong Number has some fun, steamy scenes. A few of which required me to juggle embarrassment with the steam. Challenging but fun! In this scene Avery and Jake are in the bakery at night, alone, and are having a little fun when a customer walks in. Avery is hidden behind the display cases during this exchange.

“The cupcakes,” Jake said, “are made right here. We have a smaller selection at night, but you can preorder for special occasions.”
A female voice joined his. “How about fillings? Does your baker do cream fillings?”
Jake’s cheeks heated and his eyes met mine. If the woman had entered two minutes later, there definitely would have been a cream filling.

This story is very much my style. I volley back and forth between first and third person, but Wrong Number was one of those stories that poured out of me.

I’m currently writing something very different for me! I have no idea where this story will go, or if it will ever see the light of day. The story has not been easy to get onto the page (can probably blame the pandemic more than the story!) and is currently straddling genre lines. Next to publish is an enemies to lovers romance that should be out later on this year.

To enter Giveaway: Please complete the Rafflecopter form and Post a comment to this Q: Since Avery is a cupcake baker, what’s your favorite cupcake combination?

A stranger’s NSFW text wasn’t part of her plan…

Avery Bloom has her entire life mapped out…until a stranger mistakenly texts her a dick GIF that changes everything. When insomnia has her wide awake before starting a new job, his text is a welcome distraction. Soon Avery’s dirty texting a stranger, and reveling in the freedom of being someone other than her usually-reserved self—someone who doesn’t have a hearing loss and isn’t trying to fulfill a dream that isn’t hers.

Jake Ruben never intended for that particular image to end up in a stranger’s messages, but he’s not complaining. His textmate is sexy and fun and—unlike anyone in his real life—knows nothing of the burns that limit his mobility. The new pastry chef at his mother’s Jewish bakery does, and she’s as tempting as her cupcakes. Soon he’s texting less and seeing Avery more.

But when Jake learns Avery is his texting pal, the revelation shocks them both. Will they have a chance for love without a screen to hide behind?

After spending her childhood coming up with new episodes to her favorite sitcoms instead of sleeping, Laura Brown decided to try her hand at writing and never looked back. A hopeless romantic, she married her high school sweetheart, though they didn’t even go to the same high school! They live in Massachusetts with two cats with cerebellar hypoplasia, and an energetic kid who keeps them on their toes.

Laura’s been hard of hearing her entire life but didn’t start learning ASL until college, when her disability morphed from an inconvenience to a positive part of her identity. It’s important to her to create strong, competent characters with hearing loss, as she didn’t have that growing up. At home the closed captioning is always on, lights flash with the doorbell, and hearing aids are sometimes optional.
Website | Facebook | Twitter | Instagram | GoodReads |

« REVIEW: Just Not That Into Billionaires by Annika Martin
Spotlight & Giveaway: Follow Me Always by Helen Hardt »