A Duke, the Lady, and a Baby by Vanessa Riley is the first book in the new series Rogues and 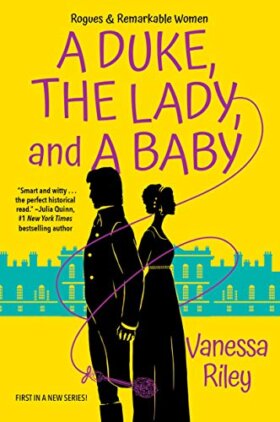 Remarkable Women. The series is based on a group of widows called the Widow’s Grace that was started by Lady Shrewsbury. The group of widows helped each other to regain their losses due to the harsh treatment of their husband’s families.

West Indian heiress Patience Jordan lost everything when her husband dies. She lost Lionel (her son), her home (Hamlin Hall), and her freedom when Markham, her husband’s uncle has her committed to Bedlam. She and her friend, Jemina St. Maur, are rescued by Lady Shrewsbury’s nephew and Patience has been sneaking to the house and feeding Lionel. Patience’s father had added stipulations into her wedding settlements that would pay when a son of hers reaches certain ages and the first payment would take place in one month.

Markham took control of Lionel and Hamlin Hall and sent his true guardian Busick Strathmore, the Duke of Repington, on a chase to find the boy, while Markham waits for the payment. Busick finally arrives to Hamlin Hall and removes Markham and all the servants. Lady Shrewsbury’s plan is for Patience and Jemina to work in the house as servants while looking for evidence against Markham and Patience’s trust paperwork. Patience is relieved to be near her son, but the longer she is there the more she hates hiding her identity from Busick. She knows Markham is just waiting and planning ways to take control of Lionel and his inheritance again.

The book had a good storyline and showed the prejudice and racism that occurred during the time. It addressed the fate of women when they became widows and the struggles they faced. The book wasn’t very easy to read though. The pace was very slow and the switching between first person and third person made it hard to follow and make sense of. I also didn’t feel that the connection between Patience and Busick was established. There didn’t seem to be a bond between them. I feel the concept of the series is great and interesting, but the book itself was not as interesting as it sounded.

Created by a shrewd countess, The Widow’s Grace is a secret society with a mission: to help ill-treated widows regain their status, their families, and even find true love again—or perhaps for the very first time…

When headstrong West Indian heiress Patience Jordan questioned her English husband’s mysterious suicide, she lost everything: her newborn son, Lionel, her fortune—and her freedom. Falsely imprisoned, she risks her life to be near her child—until The Widow’s Grace gets her hired as her own son’s nanny. But working for his unsuspecting new guardian, Busick Strathmore, Duke of Repington, has perils of its own. Especially when Patience discovers his military strictness belies an ex-rake of unswerving honor—and unexpected passion…

A wounded military hero, Busick is determined to resolve his dead cousin’s dangerous financial dealings for Lionel’s sake. But his investigation is a minor skirmish compared to dealing with the forthright, courageous, and alluring Patience. Somehow, she’s breaking his rules, and sweeping past his defenses. Soon, between formidable enemies and obstacles, they form a fragile trust—but will it be enough to save the future they long to dare together?

One Response to “REVIEW: A Duke, the Lady, and a Baby by Vanessa Riley”