In A Moment to Love by Jennifer Faye, Alexis Greer is on a mission, she needs to close the deal on the Lawson land or her 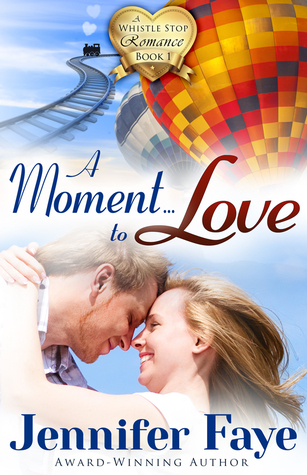 father’s land development company will go bankrupt. After all his work and sacrifices, she cannot let that happen and possibly be the cause for him to have another heart attack.

Cord Lawson knows better than to trust a city girl, beginning with the young woman in a smart suit that just arrived in Whistle Stop. She may be good looking, but she is determined to get what she wants, beginning with his meal and the last chocolate bar he just bought.

Alexis has had a bad day, and since she honestly believes all bad things come in threes, she has one more coming. Little does she knows it’s her fighting for a chocolate and beginning a business deal on the wrong foot. For after she gets the bar, she soon learns he is Cord Lawson, the man she needs to convince to sell, only to hear him tell the realtor that he is not interested in selling his ranch and the ghost town that has belonged in his family for generations, only the small parcel he had originally specified to them.

Now it will be up to Alexis to convince Cord to sell to her. But the more time they spend together as he shows her around the town and his place to convince her about how much the land means to him and to forget about his land, the more the attraction and chemistry between them grows. But Alexis will have some very hard thinking ahead of her, will she pick her father’s business and lose the man she is falling in love with, or will she risk her father loosing everything he work his life for.

Alexis has been working her entire life to convince her father she is nothing like her mother, which is why she is working so hard to keep the company going. But she will need to stop trying to show the opposite and learn to show him who she really is. While Cord will have to learn to put his past behind his and realize that not all women are like his ex-wife and love is worth a little faith. And if you are like me the best part in this book will be when they are forced together by circumstances when she is in need of medical attention and then a 24 hour watch at home, provided by Cord. 😉

If you want a sweet and entertaining read, don’t miss A Moment to Love by Jennifer Faye.

Welcome to Whistle Stop…where anything can and most likely will happen.

The notorious cowboy meets his match…

Cord Lawson instantly distrusted the young woman in a smart suit who’d just arrived in Whistle Stop. She was very pretty and clearly a city girl—but with memories of his failed marriage still darkening his mind, he’s determined to steer clear! But she’s sniffing around his land—land that has been in his family for generations. There was no way he’d let it go—even if the bank was threatening to foreclose, and even if selling could give Whistle Stop a new lease on life.

Alexis Greer had one mission—close the deal on the Lawson ranch; without it, her father’s land development company would go bankrupt. But the word around town is to keep clear of Cord and to stay away from his precious land. What had happened to cause such a handsome cowboy to live such a solitary existence? However, determination was Lexi’s middle name. She just had to keep on trying to breach Cord’s barriers, to appeal somehow to his head and heart—even if it put her in danger of losing both of hers…to him.

« Spotlight & Giveaway: The Immortal Who Loved Me by Lynsay Sands
REVIEW: A SEAL’s Secret by Tawny Weber »

3 Responses to “REVIEW: A Moment to Love by Jennifer Faye”