An Arabian Courtship by Lynne Graham is a marriage of convenience romance and was first published in 1990 and has been reissued recently. 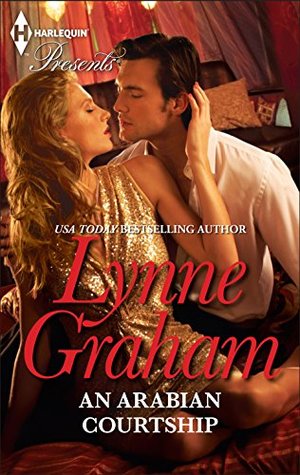 Polly marries Prince Raschid, heir to a desert kingdom. She is expecting a convenient boring marriage where she will face problems adjusting to a very different culture but to her surprise she discovers a passionate marriage where the autocratic man she married turns out to be complex and wonderful companion—and that her emotions were certainly involved!

An Arabian Courtship by Lynne Graham was a well written romance and would be loved by everyone who adores the old classic Harlequin Presents.

Raschid was an alpha hero who was cold for the majority of the book. In the end he does fall in love but his being an alpha jerk for the majority of the book was off-putting personally for me. Polly agrees to marry Raschid bowing down to family pressure and because the man she loves does not share the same feelings for her. She starts out as a shy heroine forced by her circumstances but to her credit she does stand up to the hero after their marriage. Polly is a little immature at times but I liked her better than the hero.

The romance is passionate and has some great moments. It’s a lust to love journey for the characters and Lynne Graham’s  writing is what makes this book an enjoyable read .If you like old school HP’s then go for this!

Polly didn’t expect to be happy…

Family loyalty and the knowledge that her love for Chris would never be returned led Polly to accept marriage to Prince Raschid, heir to a desert kingdom.

The problems she thought she’d face were practical ones—such as how she’d adjust to life in a very different culture.

What a shock it was to discover that the handsome autocratic man she’d married was a complex and wonderful companion—and that her emotions were certainly involved!

« Spotlight & Giveaway: Scandalously Yours by Cara Elliott
REVIEW: If You Dare by Cari Quinn »

8 Responses to “REVIEW: An Arabian Courtship by Lynne Graham”