In The Bargain by Christine S. Feldman, Shannon Mahoney has always been more comfortable in loose clothing and with power tools to the point that in high school she was too shy and odd. She had a crush on her boss Drew Kingston since back then, but she knows that he is too perfect for her and no matter what she has always becomes awkward and tongue tied when she is around him, 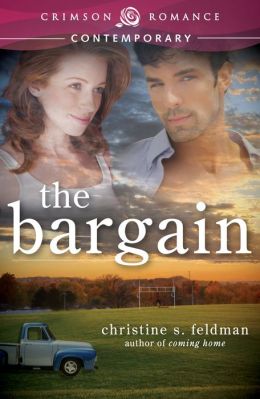 something she has not been able to change in over ten years.

Michael Kingston has always been considered a bad boy, but he needs to find redemption and forgiveness. He may have left after he finished high school and did what he wanted against his parent’s wishes. But after many years away he has not been able to find peace after remembering everything he did wrong and all the things he said to his parents before he left. Something that he was not able to ask forgiveness for before they died.

Now Michael is trying to get in touch with Drew, his younger brother, before he makes a big mistake by making the home that has been in the family for generations into a center for the kids to get help after school with their school and sports. He knows that his parent left everything to Drew and he knows he doesn’t deserve anything, he doesn’t want money or the land, he just wants Drew to listen. But getting Drew to give him the time of day is almost impossible so he decides to call his office only to have Shannon hang up on him.

But Michael doesn’t give up easily and decides to show up only to have Shannon get in his way. In the middle of their argument Drew comes out of his office and Shannon who was like a dragon guarding the gate becomes shy and quiet, something that doesn’t go unnoticed by Michael and that he will use to his advantage.

As Michael convinces Shannon to help him to get Drew to at least listen to what he has to say and he will help her be more confident and sexy, they start to become close. Shannon believes that she is in love with Drew she starts doubting herself after spending so much time with Michael, but how can she be sure what is real and what is just a crush.

For a fun, heartwarming and delightful read, don’t miss The Bargain by Christine S. Feldman.

Tomboy Shannon Mahoney has always been a lot more comfortable with power tools than high heels or lipstick, and she wishes she could reinvent herself and finally tell her perfect boss, Drew Kingston, she has had a crush on him since high school. But she is just as tongue-tied and awkward around him now as she ever was, and long-familiar patterns are hard things from which to break free . . .

Ladies’ man Michael is a former bad boy looking for redemption. He is desperate to atone for past mistakes that he made with his family, but younger brother Drew has cut him out of his life and refuses to even speak to him. Which means Michael needs help getting to Drew.

And so he approaches Shannon with a proposition: If she will get Drew to agree to hear him out, Michael will mentor Shannon in how to win his brother’s heart. Suspicious of Michael’s motives, Shannon initially enters into the bargain just to make sure Michael isn’t actually in town to cause trouble for Drew, but the two unlikely allies are surprised to discover they enjoy each other’s company far more than either expected.

Shannon starts to realize that maybe love isn’t about reinventing yourself after all. It’s about finding your perfect match.

3 Responses to “REVIEW: The Bargain by Christine S. Feldman”