In Big Sky Summer by Linda Lael Miller we read Casey and Walker’s story. Casey is a famous singer, and to the world, Walker is a good friend of Casey’s.  So good that her children refer to him as their Uncle.  When Casey decides to get out of the spotlight and live a more ‘normal’ life with her children, she moves to Parable, Montana, where Walker lives.  Unknown to everyone except for Walker, Casey’s children are not ‘test tube babies’.  For some reason, Casey decided they would be 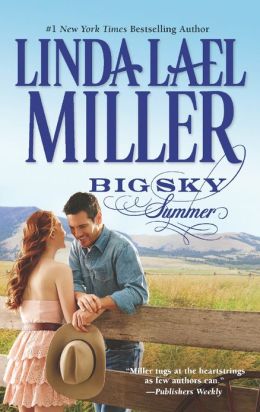 better off with just her than knowing who their father was.  They are Walker’s daughter and son though, children he’s tired of letting Casey call the shots with, children he wants to acknowledge to the world as his.
For so long, the true relationship between Casey and Walker has been a tightly kept secret…but Walker is getting tired of secrets!  He wants to be able to be a true father at last.  Casey knows the time has come to be honest with the children, but she is scared.  She has lied to them for so long about this, she’s terrified of losing them when they find out her and Walker’s secret.  Things are even more complicated for Casey because when she’s with Walker she feels things for him she doesn’t want to feel.
Walker and Casey bring out the worst and the best of each other.  Casey seems to have to argue with everything Walker says.  When he is determined to finally be honest with the children about who he is, she has to agree that the time has come.  When the truth finally is told, they will have to work together on building relationships and trust again.  They will also have to deal with the media spotlight once the news becomes public, putting the children front and center in the press, something Casey did not want to happen.  But she doesn’t give Walker enough credit in handling things, and when she suggests an unusual solution, he jumps at the chance to be with her openly at last.  Do Casey and Walker have a chance at a happily ever after together?  Or will the years of untruths hurt any chance they might have?  Will the children forgive them and be happy in the family they can be together?
I had a really hard time liking Casey!  For years she has denied her children of knowing their father, for what comes across as very selfish reasons.  She really seems to have no idea how this has affected her children until when the truth comes out, Clare, their daughter is so angry that she’s been denied a family and living in one place so that Casey can have her singing career.  Casey has worked hard to get where she is with no family support, so I was a bit surprised she didn’t seem to see the need for the kids to know their father as their father. She pushes Walker’s buttons every chance she has, she can’t seem to help herself!
Finally Walker is pushing back though.  Finally I say, because he is not blameless in this by any means!  He allowed Casey to dictate how things would be, he didn’t push back until now, no matter how much he wanted his children to know they were his.  Now he is coming around and realizing the kids will be grown and on their own soon, and he wants this chance to be with them.  I’m not sure I could put up with Casey pushing my buttons as much as he did, but he just seemed to assume that because she was their mother she could do what she wanted.
I loved catching up on the characters from other books in this series!  Opal is still my favorite, coming to the rescue again and working her magic!  It’s hard to say how realistic this story line actually is…maybe stuff like that does happen, who knows!
Big Sky Summer was book #4 in this series, and I loved getting back to this.  It can be read as a stand alone, but I recommend the whole series!   I love Linda’s writing, she pulls you in and makes you love (and hate!) the characters.

With his father’s rodeo legacy to continue and a prosperous spread to run, Walker Parrish has no time to dwell on wrecked relationships. But country-western sweetheart Casey Elder is out of the spotlight and back in Parable, Montana. And Walker can’t ignore that his “act now, think later” passion for Casey has had consequences. Two teenage consequences!

Keeping her children’s paternity under wraps has always been part of Casey’s plan to give them normal, uncomplicated lives. Now the best way to hold her family together seems to be to let Walker be a part of it—as her husband of convenience. Or will some secrets—like Casey’s desire to be the rancher’s wife in every way—unravel, with unforeseen results?

« REVIEW: That Kind of Special by Abby Wood
REVIEW: Beauty and the Wolf by Marina Myles »