Convincing the Rancher by Clarie McEwen: Tess Cole was incredibly good at talking people into what she wanted 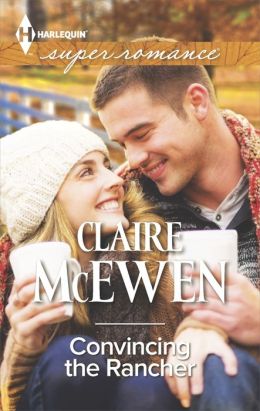 them to believe and getting them to do what she wanted them to do. So it wasn’t really a surprise when her boss had her go to the small town where the company that had hired her firm wanted to put windmills. What was a surprise though was running into a one night stand she had, and oh wait he is the mayor?

Slaid Jacobs was the uber perfect small town man, except for his divorce he was the shinning star. Had been the model student, came from a town background and now was the model single father and mayor so when the one time he allowed himself not to be perfect walks back into his life and doesn’t even remember him? Well he is allowed to go a little bit caveman, right?

Tess and Slaid originally met two years ago and had a really passionate night, until she crept out before she could even leave indentions on the sheets. Now two years later reality is setting in for them both. They both have jobs to do and while the passion level is still high, Tess is feeling like things are closing in on her while Slaid is thinking things might be getting just right. What will happen when things finally come to a head, will the passion burn out or will it stay warm enough to heat up this family?

Okay so here’s the hard part. The story is good, really good but it’s missing something, Slaid’s son. With the amount that the story played with being good parents/role models/adults until the end Slaid’s son was very rarely there. However if you are able to take that out the evolution of Tess from cold and dark to free and happy was very well done. Her character outshone all other in this novel and though yes it’s still a romance made the book teeter toward the woman’s fiction role as well.

Convincing the Rancher is a good book for anyone looking for something deeper about a woman who struggles to find herself and battle her fears.

About that night… Benson, California, represents all that Tess Cole doesn’t want. So she intends to keep her business trip there brief. Too bad her idea to quickly change the mayor’s mind about some planning issues dissolves the moment she recognizes him! That one night with Slaid Jacobs remains a personal favorite for Tess-and for him, too, it seems. Even though he’s gorgeous and hot, it’s clear to Tess that the single dad wants a commitment-something she avoids. It’s also clear Slaid is bent on convincing her they can build a future out of their passionate past. And that’s a very tempting offer…

4 Responses to “REVIEW: Convincing the Rancher by Clarie McEwen”