Cool for the Summer by Dahlia Adler: A last minute trip with her mother to the Outer Banks in North Carolina for 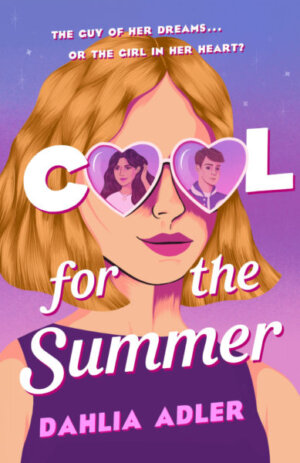 the summer, is not what Larissa expected as her last holiday before her final year of high school. Except Jasmine changes all of that. What starts out as a coolish friendship driven by circumstance, quickly develops into something a whole lot more. With some Grease inspired, by the beach romance scenes, it’s no wonder Larissa is fairly tight lipped when she returns to school and her crew, processing what the summer meant and what that means for the here and now.

Interestingly enough, Larissa is stunned to find that after obsessing about Chase Harding for the past 6 years she finally has his attention and seemingly out of the blue, Chase is well…chasing her down. Before she even realises it, all of her fan girl fantasies are coming true; the complication being of course, her dreams seem to have shifted over the summer and her mind seems to be focused solely on a certain girl, who for some reason shows up at her school on the first day.

Delivered through a flashback style ‘then and now’ non-linerar narrative, we explore the duality of the romance unfolding between Larissa and Chase whilst experiencing the romance that occurred between her and Jasmine. Naturally, the complexity of the situation is attached to Larissa’s self-concept and her identity – it appears up until this point she has never realised her capacity to be attracted to girls and thus, her bisexuality comes as quite a surprise. In very similar fashion to Grease, Jasmine instantly becomes part of Larissa’s friendship group as her best friend Shannon appears to have dived on her the first day and by all accounts they have struck up quite the bond overnight not dissimilar to Sandy and the Pink ladies. Naturally, this creates further angst for Larissa who doesn’t know if she can trust her friends to disclose what happened over the summer, and why would she when she suddenly has Chase Harding where she has always dreamed he would be?

This sweet and at times sexy read manipulated tension effectively mostly due to the then scenes and how they played out as a contrasting backdrop to what was occurring in the present. Unfortunately, the friends Larissa returned to were described as being quite shallow, and it wasn’t really until the end that their value and certainly support for one another was evident. Similarly, Chase’s random explanation of why he was suddenly attracted to her after knowing she had been crushing on him for 6 years was a little flimsy. Having said that, Larissa had returned with a fairly powerful sense of self, despite not fully comprehending her sexuality and it was no doubt a statement on what people look like and how energy shifts when they fall in love.

Throughout, some fairly significant issues were tackled with style and at no point did it get too dark, or on the flip, too dismissive, hence, the balance was right particularly given its YA status. On the whole, I highly recommend this for YA who are awakening to their own possibilities, sexual or otherwise, and for those who enjoy a good teen love story with a cool nostalgic twist.

Lara’s had eyes for exactly one person throughout her three years of high school: Chase Harding. He’s tall, strong, sweet, a football star, and frankly, stupid hot. Oh, and he’s talking to her now. On purpose and everything. Maybe…flirting, even? No, wait, he’s definitely flirting, which is pretty much the sum of everything Lara’s wanted out of life.

Except she’s haunted by a memory. A memory of a confusing, romantic, strangely perfect summer spent with a girl named Jasmine. A memory that becomes a confusing, disorienting present when Jasmine herself walks through the front doors of the school to see Lara and Chase chatting it up in front of the lockers.

Lara has everything she ever wanted: a tight-knit group of friends, a job that borders on cool, and Chase, the boy of her literal dreams. But if she’s finally got the guy, why can’t she stop thinking about the girl?

« Spotlight & Giveaway: Wet and Reckless by Samanthe Beck
REVIEW: Like Cats and Dogs by Kate McMurray »