In Cupid’s Revenge by Bea Moon, Maggie Tyler’s inner crazy lady has been unleashed. Maggie believed that her two-year relationship was going to develop into a marriage proposal, only to have him dump her and tell her that he had been having an affair with another co-worker and he loved her. She wanted to take things like a lady, but instead she made a complete scene, after that she made so many degrading messages of him and his new lover and posted them on the board at work that she ended up getting fired. 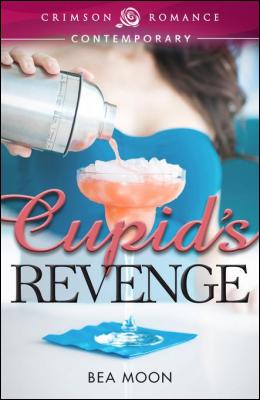 To make things more interesting, she got a second job at Party World where she had to dress like a baboon and inflate balloons. She was made fun of by young males, but that only pissed her off a little. Only when her ex-boyfriend shows up with his girlfriend does the inner crazy lady make another appearance. While trying to hide from them she inflates so many balloons to hide behind that the store manager gets angry and starts yelling at her to stop doing that. After another argument and her going crazy on the balloons she ends up getting fired. (Good thing all this only happens in the first chapter and then the fun begins)

Now without a job again, Maggie has agreed to meet with Billy, her co-worker, and hear his band play on the condition that he returns the baboon costume for her before she ends up having to pay for it. While there, she ends up with a job as a barmaid. She may not have much experience but with the help of the girl that is leaving she learn the ropes fast enough.

Maggie has decided to lock away any fantasy about love, dating or anything of the like and have no more pain. But David, a regular at the bar may have other ideas for her in that respect. Convincing Maggie to agree will not be easy though, but in the end it’s totally worth it.

Maggie will have a journey to self-knowledge and will learn that there is always a silver lining. For if her cheating ex hadn’t broken up with her she would not have what she has with David and she wouldn’t have a much better job than she did before.

If you like a funny, entertaining and sweet romance you can’t miss Cupid’s Revenge by Bea Moon.

After being dumped by her cheating boyfriend, Maggie Tyler’s inner crazy person is about to be unleashed. Once free, Crazy Lady wreaks havoc on Maggie’s orderly life. By the time she wrestles the monster back into its cage, Maggie is fired from her cushy position as an executive assistant. Out of work, and unemployable, she’s forced to take a job manning the balloon stand at Party World. She wears a furry Binky the Baboon costume, hoping no one from her past will see her. All goes well until a wise-ass teenager opens the floodgates for an encore performance of Crazy Lady. Maggie is canned once again.

With the bill collectors swarming like sharks, she is forced to take a job tending bar at Frank’s Rock Club. Complications mount when her sullen teenage niece Becca arrives for the summer, along with a stray and very battle-scarred cat. As Maggie begins her new life, she jettisons her most destructive habits . . . smoking and love, and is joined on her journey by her friend, Pat, an emotionally battered veteran of the dating scene who bears the skid marks of too many failed relationships. Despite her resolve, Maggie finds herself drawn to David, a man of mystery. Is he the man of her dreams or the stuff of her worst nightmare?

As Maggie, Pat, and Becca pick their way along the road toward true love, they find themselves facing unforeseen roadblocks, not the least of which is organized crime. Is Mystery Man a criminal? Will Frank turn out to be Pat’s soulmate? Will the arrival of Becca’s mom throw ice water on her burgeoning romance? Does love triumph? Well, of course!

« Review: In the Rancher’s Arms by Kathie DeNosky
Review: Undressed by Avery Aster »