In Date with a Surgeon Prince by Meredith Webber, lust has finally hit Nurse Marni and that too on her first surgery with hot-shot surgeon Gaz and when he whisks her off for a magical date on the red desert sand dunes of Ablezia his sizzling kiss makes their mutual attraction 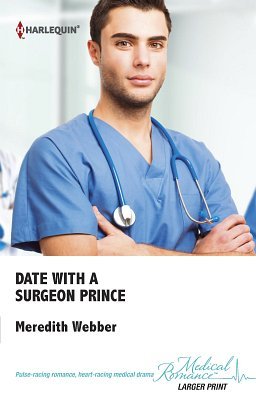 grow stronger. But how will Marni react when Gaz tells her that he is not only the friendly surgeon everyone loves, but also Crown Prince Ghazi and how will he react when Marni discloses their betrothal which happened when they both were young.

‘I had no right to do that. I have no time. None! No time at all!’ He spoke
abruptly—too abruptly—the words harshly urgent because he was denying
his desires and angry with himself for—
For kissing her?
No, he couldn’t regret that.
Angry at the impossible situation.

Date with a Surgeon Prince started off great but became quite predictable till the last few chapters where it picked up pace again. The characters were quite likable and their romance was cute and slow paced. Marni was easy to like because you can understand her actions as the author lets the reader into her mind quite often to explain the same. Gazi was likable too but the amount of time devoted to his thoughts is quite less as compared to Marni’s. While the medical details were in sufficient amount some parts of the story appeared to be unfinished

Ghazi groaned and held her more tightly, pressing the softness of her body
against his, fitting the two halves that were man and woman together to
make a whole, aware she must know just how much he wanted her.
‘It’s like a madness, my desire for you,’ he whispered, before his lips
closed on hers, seeking to devour her, to draw her body into his, to make her
his for ever.

Overall, Date with a Surgeon Prince by Meredith Webber is a cute and slow paced romance about two completely different people finding love due to undefinable fates.

With his chocolate eyes sparkling above his surgical mask, Nurse Marni finds her first surgery with hot-shot surgeon Gaz unforgettable! And when he whisks her off for a magical date on the red desert sand dunes of Ablezia his sizzling kiss leaves her wanting so much more….

Gaz didn’t think he’d fall so fast for this beautiful, innocent nurse. But how will Marni react when he tells her the truth? He’s not just the friendly surgeon everyone loves, but also Crown Prince Ghazi!