In Delicious Destiny by Yahrah St. John, Shari Drayson has been the disappointment of her family, not professionally, but because she had a baby out of wedlock. What her family doesn’t know is that her friend and roommate not only stole recipes from them, she also stole the father of her child and married him. And that is a secret that she wanted to keep as long as she could. 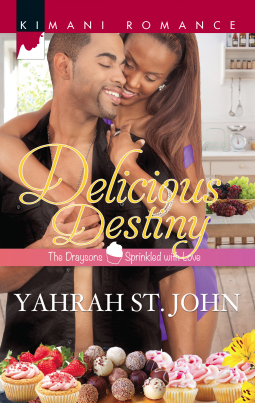 Grant Robinson never forgot Shari, he wanted to date her and have a relationship with her, but after their one-night together her reaction that it was only a hookup was not something that he expected. Hurt and feeling used he let himself be taken by Shari’s friend and ended up marrying her, his worst mistake ever. Now almost five years later he tracks her down via her brother, and he wants to see if something new can develop.

To Grant’s shock, Shari has been hiding his son from him, he has lost 4 years of his son’s life and he will not loose one more minute. So he will marry Shari, even if cannot trust her anymore.

Shari never stopped loving Grant and she knows that her son, Andre, needs a father, so faced with a court battle and the possibility of loosing her son or marrying Grant she picks marriage. But they must keep the real reason secret from her family. But when their grandmother signs them up for a TV competition things will get hard to keep under wraps, for not only are Grant and Shari still on their honeymoon, they will also be facing the woman who drove them apart and face the truth of their own actions that kept them apart for so long.

Shari is part of a big family and has always felt that she was not always fit in or was appreciated for what she could do. So now she will try to show her family what she is really made of, but with her so many challenges during the competition and a marriage of convenience that she wishes was real she will have her work cut out for her.

If you like a sweet romance with a second chance at love and a close family that will fight for what they want and believe you will like Delicious Destiny by Yahrah St. John.

Publication Date: May 21, 2013 | Series: Kimani Romance (Book 335)
Sweet secrets…It has been almost five years since Shari Drayson graduated college—almost five years since she had her heart broken. Now the only man in her life is her cherished son, Andre. But her life is full, and her family’s bakery is about to appear in a baking competition on national TV. Who needs love when you’ve got pastries?Sweetest seduction…When Grant Robinson finally tracks Shari down in Chicago, he expects she will still be beautiful. He expects she will still be smart. What he doesn’t expect is her four-year-old son—who looks exactly like him. The wealthy restaurateur is stunned, and his anger wars with passion for the woman he has never truly forgotten. Determined to claim what is his, Grant insists they marry at once. But his bride soon realizes she’s at risk for another heartbreak. Can Grant’s skillful form of persuasion change her mind and convince her that his love is all she really needs?

« REVIEW: The Lady and the Unicorn by Iris Johansen
REVIEW: Bachelor’s Special by Christine Warner »
Comments are closed.