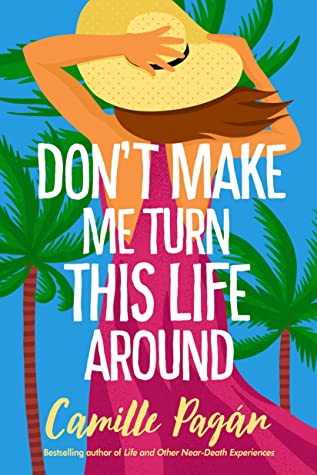 Engaging from beginning to end, Don’t Make Me Turn this Life Around by Camille Pagan explores a key impasse in Libby’s life, who lost her mum as a child to cancer, who recently lost her dad, who has been cancer-free herself for 10 years and yet, who when all things suggest she is living her best life, don’t seem to add up to the grand sum of happiness.

For Libby, her own contentment seems as elusive as an itch she can’t scratch and when her and hot husband Shiloh appear to be drifting apart she knows she needs to do something to capture the magic again. Therefore, traveling back to Puerto Rico where she first met and fell in love with Shiloh seems like the only thing she can do to get her groove back for both herself and her family, including twin daughters Charlotte and Isa.

In many ways, this novel had the kind of pulse that negated necessary action kernels n(although it did appear to be one disaster after another) because it dabbled in a type of pragmatic realism that highlighted that happiness is fleeting. For the most part, this undercurrent was consistent with the strong themes of survival woven throughout.

Whilst I couldn’t come at the two children and had early moments of severe frustration in terms of Libby pandering to their entitlement and tolerating their off-the-cuff rudeness, I appreciated Libby’s existential crisis, and whilst she didn’t rush out and buy a Porsche or snaffle a 20-something mistress, she was certainly in the headspace to entertain the idea. And that’s the thing about mid-life; there is a certain acknowledgment and acceptance of the fleeting nature of life and therefore reverence of death, irrespective of other ‘close-call’ death narratives that have occurred prior. Hence, Libby’s story was quite powerful from start to finish, and whilst it won’t likely appeal to young adult readers, I highly recommend it to lovers of family drama and romance as this is one of those peace – time war stories and tales of survival: In love, in marriage, in role, out of role and in terms of self-discovery that provides perspective and food for thought.

Overall, this was a good read that ended without needing the bang and fanfare, emphasising that being in the moment and being open and honest about how we feel is often the key to staying true to who we are.

It’s been thirteen years since doctors declared Libby Ross-Velasquez a goner. Yet here she is—cancer-free. So why doesn’t she feel more alive?

Sure, Libby’s husband, Shiloh, has been distant. One of their daughters has a serious health condition. And her father’s death hovers over Libby like a rain cloud. Still, this eternal optimist knows she’s the winner of the existential lottery.

But when her forced cheer isn’t enough to keep her family from catching her blahs, she decides to fly them all to Vieques. The Puerto Rican island is where she and Shiloh fell in love—and where she decided to fight for her life after her cancer diagnosis. Where better to put their problems into perspective?

Then a tropical storm strikes. Libby pretends everything’s fine, even as she fears she’s doomed her family. What she can’t see is that the worst disaster they’ve faced may be the best thing that ever happened to them. But first, they have to get through it.

« REVIEW: His Cinderella Next Door by Cara Colter
REVIEW: My Lucky #13 Piper Rayne »