Emily: Sex & Sensibility by Sandra Marton: If you have read my my reviews about the Wilde brothers you know how much I loved them and wanted to know what happened to the sisters? Well, Sandra Marton made my wishes come true when she went ahead and wrote their stories. Yes, I know they are with a different publisher, but that doesn’t take anything away from how awesome these books are as well. Don’t worry though, if you have not read the Wilde brothers books before you can go back later and won’t feel left out of this story as if you are missing something in the story line. 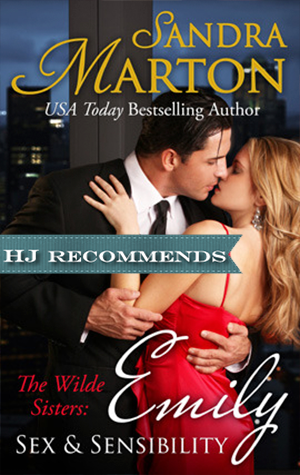 Here we begin with Emily, if you remember her, she was supposedly working for a museum in New York. Well now we get to know what has been going on in her life and what she has been hiding from her brothers.

Emily has been telling her family that she has been living the life working for the museum and has a wonderful apartment worthy of a Wilde. Truth be told, not only does she not work at a museum but works in a seedy bar as a piano player, she also lives in a not very nice area in New York where she shares the apartment with another girl. All the customers only want to hear popular songs being played, or the widely known New York New York being played again and again, while she would prefer to play something a little more classical and upscale. So it’s no surprise that when she is close to quitting time and a drunk customer asks for New York New York she refuses, only this bring a demand from the owner to play what the customer wants. And when this very drunk customer gloats and ends up tipping his beer bottle on top of her and ruining her dress, well things will get interesting then. For she retaliates by grabbing his beer and tipping the rest of the bottle inside his pants and ends up fired, in the middle of the night, in the rain.

This is how Marco Santini finds Emily as his limo is driving by the bus stop where she is already soaked as is, and his limo has just splashed her with even more cold water. Well Marco may not be a saint, but he is a gentleman, and the least he can do is offer some assistance. At first sight it seems like she is just another girl that could be in that corner, but the closer Marco gets the more he recognizes that he cannot leave her there, in such a dangerous area in the middle of the night.

Emily doesn’t know what to do about Marco, at first her imagination takes off and she thinks he may be a serial killer, but as she gets to talk to him more, she is just get irritated about him not leaving her alone. She knows that he is not a serial killer, but still she will not take the help from someone who obviously is a player, much like her brothers used to be. But she is in more danger if she stays at the curb in such a dangerous area. Besides, his lady companion is in the limo with him and she will serve as buffer between them until he drops her off in a better place. Unfortunately, when asked for an address she gives an address she knows is in a good area, too bad that Marco knows that she doesn’t live there since he is still working on the construction of it.

Things will get even more interesting when Marco remembering her story about being a piano player and being in need of one for his grand opening asks his HR to contact Emily and hire her. Only when she arrives and answers the questionnaire HR realizes that she is more fit to be Marco’s PA, a position that they have not been able to fill. And so another confusion begins when Marco receives a call to interview his new PA that is coming up to see him, only to meet Emily and believing that there was a mistake. He doesn’t like to mix business with pleasure, but not having Emily in his bed is not something that he can accept.

I LOVED this story, and can’t wait to read more and find out about the other two Wilde sisters. Emily: Sex & Sensibility by Sandra Marton is HOT, fun and oh so sexy and entertaining that you will not be able to put it down.

Emily Wilde has led a privileged life. Now, she’s determined to succeed on her own. Marco Santini has worked his way up from poverty to great wealth. He’s not interested in permanent relationships. She’s not interested in being a man’s pampered mistress. Becoming Marco’s assistant seems to suit them both… until one night in Paris, when the passion smoldering between them turns to flame.

« REVIEW: A Promise for the Baby by Jennifer Lohmann
REVIEW: Her Hard to Resist Husband by Tina Beckett »