Eye Of The Beholder by Jackie Weger: Phoebe is looking after her brother and sister (Willie-Boy and Maydean), but not as well as she’d like. They’re pretty close to rock-bottom when she literally backs into trouble with a capital T. The man emerging from the truck she’d just hit looked rather terse, and he talked a 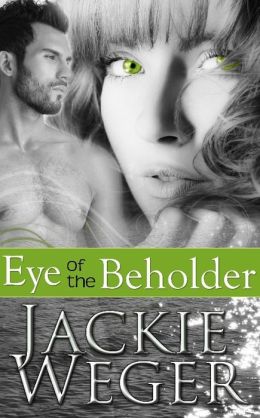 good game too. She’d have to pony up seventy dollars or she could say goodbye to her bumper – license plate and all. Since that’s seventy dollars more than she had to her name, it wasn’t gonna happen anytime soon.

Phoebe just needs to find where he’s taken the back end of her truck and get it back. She gets some help from a policeman – whom she told that G.G. Morgan was her cousin. She has pride, but pride isn’t gonna get her on the road to find a place for her family. She finds Gage’s house in the middle of his scrapyard, and to her surprise, a daughter that is being tended to about as good as the grounds upon which she lives.

If Gage won’t give her the bumper without payment, well then – she can work with that. She does all the things he’s been ignoring since his wife drowned a year ago. Like cooking, cleaning, making sure Dorie stays out of trouble and gets human company. Gage may not like that Phoebe has insinuated herself in his life without his consent, but he can’t argue that she hasn’t done some good around the place.

Even though she’s gangly and terribly naive, he knows she’s a little too sly for his liking. So when Gage starts feeling attracted to her, he pushes it away as fast as he can. He knows better. However, Phoebe doesn’t know anything about the things she’s starting to feel for Gage. All she knows is that she wants to get closer.

The thing is, she definitely hasn’t been completely honest with the man she’s fallen in love with. She can’t figure out a way to tell him her original plans, even after he asks her to marry him – and it might be the thing that screws up everything.

Eye of the Beholder was charming and homey. It was originally published in 1987, but unlike other books from the same time – this one held up remarkably well. It took me a chapter or so to get used to the colloquialisms, but once I did I was immersed in the story. It’s definitely not as polished as more contemporary books, but I was pleasantly surprised.

Twenty-four year old Phoebe Hawley is on a quest to find a place for her homeless family. Phoebe is Alabama tough, country smart and sapling thin. On the road with two siblings, twelve year-old Maydean and five year-old Willie-Boy, Phoebe is out of money, out of gas and out of patience. Now the only things she owns in abundance are Hawley backbone and Hawley pride–neither of which she can trade for food or gas.

But will Hawley backbone and Hawley pride step aside to let her do it?

4 Responses to “REVIEW: Eye Of The Beholder by Jackie Weger”