Eyes Wide Open by Raine Miller is Book 3 in The Blackstone Affair series. This time, we get the story from Brynne’s POV and from Ethan’s POV. I really loved the way the author did this third book. We finally get to see how Brynne perceives events at just about the same time as we see how Ethan perceives them. But its better than when I’ve read a book from the third person POV (that’s what its called right?) because this felt so much more real. Well, the feelings felt more real anyways and that just sucked me in even MORE! 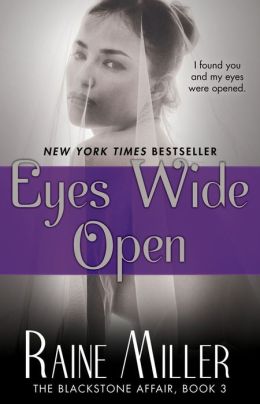 I still love Brynne. She’s a tough one and she’s been through so much shit. My goodness! If I’m remembering correctly, we pretty much got the whole story about Brynne during Book 1 (Naked) so if you haven’t read Book 1 by now, you may be a little confused but I think you could still make it through this book just fine. Anyway, Brynne continues to show her strength as she learns more about the trouble that’s headed her way. Brynne and Ethan finally get some more information about the person who is stalking her and sending her awful texts. But Brynne is also learning a lot more about herself in this book. I would LOVE to tell you more but I don’t want to ruin or spoil any plot points. There is SO much that gets wrapped up in this book that its hard to tell you much more about it!!

Ethan is still awesome! He’s kind of a tough guy… well, he’s a total tough guy but not in a bad way. He such a softie around Brynne though and its so frickin adorable! Brynne gives the very best description of Ethan. I’m paraphrasing of course, but she says something about how he’s this combination of hot, bad boy, sex god and mannerly, romantic gentleman. I would absolutely agree! Lord have mercy, Ethan sounds like a dynamo in the sack! In addition to all that, he’s a really smart guy and he’s so ridiculously devoted to Brynne. I’m trying to think of ANYTHING that I didn’t like about Ethan… Oh wait! I got something! There’s this point where Ethan has a proposal for Brynne and I didn’t love how he went about bringing it to her. He’s always pretty bossy around Brynne but I really felt that in this instance, he would have been more sensitive, more romantic about it. But he just blazed right on through, telling her what he wants to do without really taking her feelings into account. But that was just the one time and, in the end, he definitely fixes things!

Again, I really loved the switching back and forth between Brynne and Ethan’s POV. It may be distracting to some readers but I absolutely loved it and I really dug being able to be inside each character’s head during pivotal scenes. Pretty much all of your questions from the previous two books are answered here and everything is wrapped up. I could see who the bad guy was and I could see what was coming with Brynne’s health. Even though much of it was a little predictable, I did have a lingering question about Ethan’s time in the military. He’s clearly got some kind of PTSD but he never gives Brynne the whole story. I’m not saying that I needed all of the awful details but even Brynne noted that he pushed her for her whole story but never gave her his. I suppose it isn’t imperative to get the whole story since we get the gist of it. I kept wondering if there was more to the story. Even though a lot of it was predictable, I still couldn’t put the book down and I’d for SURE read it again!

Overall, I loved this book. Damn, it was so hot. Just like Book 1 and Book 2, the heat level is just about off the charts! I love Ethan and Brynne together and they so need each other. I have to admit that it is certainly possible that I shed a couple of tears towards the end… There were some heartbreaking scenes that just ripped me up. But Brynne is not some shrinking violet and she comes back in fighting form and I just loved it. I absolutely would recommend this book to anyone who likes a hot romance that spans more than one book. Yes, I know that I said you didn’t have to read the first two books but why would you deprive yourself of this delicious romance?! Its sooo good. Just go and get these books. You WON’T regret it!!!

Release date: August 20, 2013 | Series: Blackstone Affair
Big surprises are on the horizon for Ethan and Brynne as they struggle to adjust to what life has thrown at them.
Demons from the past are threatening to destroy the passionate bond they’ve forged despite their vow that nothing will ever keep them apart. A truly devastating loss coupled with the promise of a new hope opens their eyes to what is most important, but is it possible for the lovers to move on from the painful histories that continue to haunt them? Still lurking in the shadows is a stalker, plotting evil amidst the distraction of the London Olympic Games. Brynne and Ethan are on the cusp of losing everything as the stakes rise. Will they yield to circumstances beyond their control or will they give every ounce of fight they have left to save each other and win the ultimate prize of a life together?Eyes Wide Open is a passion-wrought story that shows us what pure love can achieve when tested, and what the heart can accomplish, despite danger and adversity.

« REVIEW: A Throne for the Taking by Kate Walker
Giveaway: Celebrating America! »