In Forgiving Paris by Karen Kingsbury, When Ashley Baxter Blake was asked if she would like to have 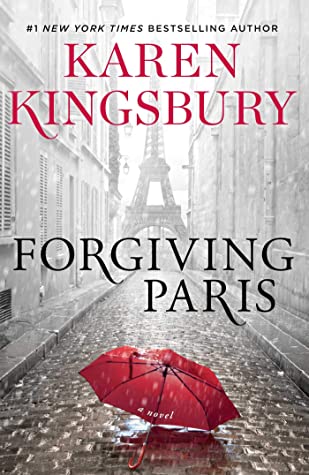 her paintings featured in her very own gallery showing in Paris, she knew it was the opportunity of a lifetime. Not only would she be proving to herself that she’s made it as an artist, but it would be a way to put her nearly tragic first taste of Paris to rest, for good. Ashley’s trip there as a young woman drastically changed her life. Unbeknownst to her, it also changed the lives of others. Something she and her husband will soon find out when they celebrate both her art show and their wedding anniversary in the City of Lights.

‘After this, Paris would be an entirely different place for her. A place of true romance and laughter, accomplishment and blessing. And something else. The very sweetest redemption.’

Alice Michel Arquette has come a long way from the once drug addicted young woman she was, living on the streets with other addicts. Now she has a wonderful son, a loving husband, and a life she couldn’t have imagined back then. And it’s all thanks to the kind words of an American stranger at one of Alice’s lowest points in her life. Her son Gabe’s lovely girlfriend Jessie is enthralled by Alice’s story and they make the realization that perhaps Jessie’s aunt Ashley could be the American who saved Alice. With the chance to see each other one more time and discuss the choices they made that had lasting effects, Alice and Ashley will find out that a guiding hand touched their lives in miraculous ways.

“Everyone has a past. Everyone comes from some background. The place where God found them and picked them up and dusted them off. The day they first understood how loved they were.”

A continuation of Karen Kinsbury’s beloved Baxter Family saga–but a book that also stands alone–Forgiving Paris was Christian Fiction with dark themes that led to a heartfelt, joyous outcome for its cast of characters.

‘Now Ashley had a reason to believe she should go back to the place that had almost destroyed her and make peace with it. This trip was about forgiving Paris, once and for all.’

I will caution readers on two things about Forgiving Paris. First, it can certainly be read as a standalone but there will be numerous characters to keep track of. Not only are there several points of view that are all intricately woven together, but the Baxter family is also pretty large and has their own rich backstory. So if you’re new to Kingsbury’s work, it might feel a tad overwhelming. Second, this is definitely Christian Fiction. There is mention in every chapter, every passage–sometimes every single page–about faith, divine intervention, scriptures listed, prayers being said. If you’re a reader who’s not comfortable with a novel quite that entrenched in religion then this might not work for you.

Kingsbury did weave together a tale that was heavy yet hopeful, if that makes sense. It started off in the late ’90s, moved forward to present day, and then had flashback passages explaining how Alice, Ashley, Jessie, and Gabriel’s lives all got tangled up together. There were some very tough decisions Ashley and Alice had to make over the years. So I do have to give Kingsbury credit for not glossing over the difficulties life can bring us all and for really exploring how each choice has ripple effects–how it can affect others without us even realizing it.

QOTD: Have you read any of Karen Kingsbury’s Baxter books or seen any of them that were made into Hallmark movies?

The #1 New York Times bestselling author of life-changing fiction returns with a wise and worldly novel of forgiveness and hope in the City of Lights.

More than two decades ago, Ashley Baxter Blake made her most grievous mistake in Paris. Now, a forgotten voice brings new information about that terrible time, causing Ashley to see that experience in a new light. Can she finally lay down yesterday’s pain and move on?

In Paris, Alice Michel is having dinner with her son Gabe and his new friend, Jessie Taylor, an Indiana girl who is studying abroad for the semester. Alice’s life is so good now, totally different than it was twenty-four years ago. As the dinner conversation goes on, Alice tells the young couple that her long-ago drug addiction nearly killed her. But then her life was saved by a conversation with an American artist. Alice can only remember the girl’s name: Ashley.

Back in Indiana, Ashley and her husband are about to take a twentieth anniversary trip to Paris, where she will have her first French art show. But Ashley is hesitant. She has never forgiven herself for what happened there, and she is dreading the return of memories she’s been holding at bay. Just before the trip, Ashley gets a call from her niece. Jessie explains that her boyfriend’s mother remembers working at a cafe with an American named Ashley. “Could that be you?”

When Alice and Ashley meet, a flood of memories comes for both women, taking Ashley back to a reckless affair and an unexpected pregnancy and Alice to the night she nearly ended it all. Can this new information bring healing and closure? Maybe it is finally time for Ashley to forgive herself…and Paris.

« REVIEW: The Night of Many Endings by Melissa Payne
Spotlight & Giveaway: Love and Let Bark by Alanna Martin »