In Gold Coast Angels: Two Tiny Heartbeats by Fiona McArthur, Midwife Lucy Palmer discovers she is pregnant on the first day of her new job and that too when her gorgeous new colleague Nikolai Kefes suggests her a pregnancy test and scan. Lucy never expected that her only one night stand on her graduation day would have such drastic consequences but after watching two tiny heartbeats on 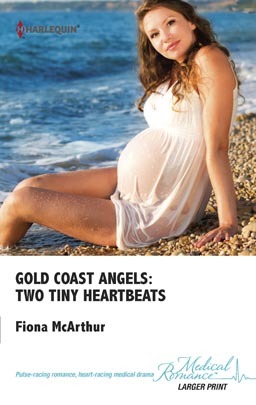 the monitor, she falls in love with her unborn babies and resolves to focus everything on her babies. Distraction is not an luxury she can afford but her inconvenient attraction to a sexy obstetrician is weakening her resolve to stay focussed.

Two Tiny Heartbeats is a well written novel with an unconventional plot of a heroine pregnant by someone else and a hero who loves and accepts her nevertheless. The romance was based on emotions and conversations rather than passion or chemistry. The steam was also non existent because the romance was more on the emotional side.

The characters were normal and I did not find anything striking about them. I could not get Lucy and her refusal to take any money from the father of her babies because he was her friend was not justified according to me. Whatever problems they had were resolved quietly without any drama.The conversations between Lucy and Nikolai were good but my attention kept on wavering due to the lack of action from either side.

So, after a timeless journey of sensation, intoxicating kisses and the
tender wonder of this woman’s beautiful body, Nick drew back. Shuddered
the demons back into their boxes and stilled his hand

Overall Two Tiny Heartbeats is a well written, fast paced story with a strong narration but with not so engaging characters and lack of drama, the story fails to make an impact. Recommended for Fiona McArthur fans and the readers who want a romance based more on conversations.

First-day baby bombshell!
Discovering she’s pregnant—with twins!—is not how midwife Lucy Palmer imagined her first day in her new job. Worse is that it took her gorgeous new colleague Nikolai Kefes to suggest a pregnancy test and scan. As they watch those tiny heartbeats on the monitor, Lucy knows instantly that her two little babies are the only things she can focus on. And that her highly inconvenient attraction to the hunky Greek obstetrician—with his legendary reputation for short, sweet, emotionally unavailable relationships—definitely has to be ignored…!

« Spotlight & Giveaway: Court Me, Cowboy by Barbara White Daille
REVIEW: Anything But Love by Beth Ciotta »