In Happy Medium by Meg Benjamin, Ray Ramos is renovating an old house in King William District. He just wants to get the work done and flip the house, but it’s turning into a bigger, costlier project than he anticipated. When Emma shows up wanting to use the house to film an episode of American Medium, Ray is not too sure about the whole thing. After much hesitation, the money Ray manages to negotiate is what convinces him to allow it. 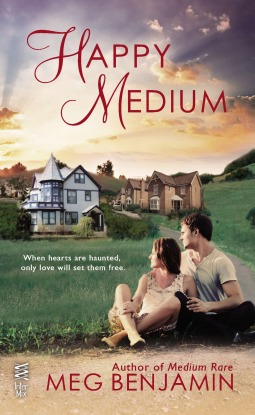 Their worst nightmare is about to be unleashed when Gabrielle performs a fake seance in the house…suddenly Ray and Emma are in the midst of the paranormal. Neither of them expected anything like the actual haunting of the house, and with the experiences they are each having, unbeknown to the other, they are each convinced they must be going crazy and that no one would ever believe them. Soon they have no choice but to confide in each other and work together, delving into family secrets and the history of the house. As the danger becomes imminent, in the rush to unearth the truth behind the haunting, they also discover each other. But will evil get the upper hand in the end?

Emma is an easy heroine to like! She has got her foot in the door of the entertainment industry, where she thought she’d be happy…but she’s not so fixated on her career with American Medium that she’s blind to everything else. She’s smart and independent, but also a little insecure, which makes her all the more like able and realistic, like any woman you might know. Ray sees in Emma what Emma does not, and that is good for Emma’s self confidence. I enjoyed watching her grow and become more content with who she was in Happy Medium. I really liked Ray, although I did find it a bit odd that he and his family seem to be close, but they also don’t seem to communicate about a lot of important stuff! Until now, Ray hasn’t given the idea of paranormal much thought, but he and Emma seem to accept that it exists even if it is at times terrifying!

Meg Benjamin gives us a paranormal suspense that will give you goosebumps as you read Happy Medium. Meg’s writing is smooth and easy to read, making the story really pop off the pages at you. The romance of Ray and Emma shares equal parts of the plot with the paranormal suspense, and Meg manages to blend the two together seamlessly. In Happy Medium we see and hear just enough about them to get a feel for the family relationship, but we don’t really see a lot of Ray’s family which makes Happy Medium easy to read alone if you haven’t read the other books in this series.

Ray Ramos has a problem— the King William District mansion he and his business partner purchased for a fast renovation needs more work than expected. Ray could use a quick infusion of cash. Enter Emma Shea, assistant to Gabrielle DeVere, the star of American Medium. Gabrielle is looking for San Antonio houses to use for her televised séances, and Ray’s fixer-upper seems to fit.

When Gabrielle does a sample séance for Ray, he witnesses something inexplicable and has an unsettling dream later that night. He then learns from his sister Rose about the Riordan family’s affinity for ghosts. But Emma also had a similar experience during the séance. The two decide to investigate the haunted house, even if it means taking on the vengeful succubus bound to it. It doesn’t hurt that Emma is immediately attracted to the laconic Ray or that Ray is intrigued by the buttoned-down beauty who seems determined to hide her considerable assets behind sober business suits.

One Response to “REVIEW: Happy Medium by Meg Benjamin”