He Touches Me is Book 2 in the Seen Trilogy by Cynthia Sax. You are welcome to read my review of Book 1, He Watches Me, here.

I found Book 2 to be quite similar to Book 1 in feeling and in plot. Nothing has really changed for Anna and Blaine and they’re still doing the same things. It’s difficult to describe exactly what is good and bad about this book so let’s just jump right in so I can figure out, shall we? 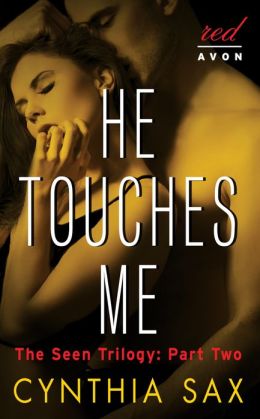 Anna is still weird little Anna. She’s still flat broke and it still makes me nervous for her. When your heroine has to choose between lunch for a week and bus fare, I think you’ve gone off the tracks somewhere but I have no idea why. Anna is also still an exhibitionist and if it wasn’t obvious before, the author rubs Anna’s lady bits in your face to make sure you get that. Whenever Anna and Blaine are engaging in heavy petting or fingering (that’s about all the action you’ll get in this one), she’s imagining that someone else is watching her. Someone in the bushes, someone down on the street, the driver of the limo…ok, sweetie, get a grip. Speaking of getting a grip, Anna is a little bit self conscious about her body. She mentions her small breasts several times over the course of Book 1 and Book 2 and here in Book 2, I noticed that she mentioned how baggy her clothes were. I originally thought it was a way to become invisible, like she prefers, but now I’m thinking that she’s skinny. This is backed up by the fact that she’s thrilled when there’s a marketing pack of hazelnut spread and crackers hanging on her front door and she considers that her lunch for the day (yikes!). But then, she mentions her curves and I’m thinking, “What curves?” So I’m a little confused as to what Anna looks like. She still has confusing thoughts about the hot guy at work (Michael) but she’s developing some kind of friendship with “Goth girl” at her work. Later, she realizes that the utility bill at the house she’s house-sitting is so high that it will wipe out half of her paychecks for the month even though she turns nothing on – no A/C, no TV, nada. So she heads out in search of a SECOND job, which is where Blaine comes in again…

Blaine is still quietly, mysteriously sexy and I dig him even more. And no, its NOT just because he’s described as having a huge manhood! LOL! Blaine hasn’t changed much in this installment. I felt he was still something of a dominant, which I had hoped would be explored but it’s clear that there won’t be time for anything in-depth. He’s still extremely busy with his company and sometimes, I even felt that he didn’t have much of a role in this book. He was there, trust me, but not quite enough. As I mentioned above, we finally get a glimpse of the treasure he’s hiding behind his zipper. Well, a literary glimpse, anyways! 🙂 Of course, this is all through Anna’s eyes and she has NO experience with men so her perception may be skewed. Something that I really liked was that Blaine kind of loses his control just a teensy bit with Anna. Anna loves it but it seems to scare the shit out of Blaine and he does the required retreat. I was a little confused about that part because it seemed like he bolted out of town, using work as an excuse but it also seemed (to me) like he would be back. Anna takes it like Blaine is done with her forever and she’s devastated. When he does come back, it all felt overblown because I didn’t know if I should have been worried that he would be gone for good (like Anna was worried) and that I had missed something or if my reaction (thinking he would return) was correct.

Together, Blaine and Anna are hot. Again in this installment, there is no sex, unless you count dry humping, in a limo…without clothes on… Oh nevermind! I’ll never be able to explain it! On one hand, it was crazy hot (naked dude, hello!?) and on the other hand, it was a little lame (adults, dry humping?). I would say that this novella is crazy sensual but maybe not sexual. There’s plenty of masturbation (again) but not much else. One thing I definitely didn’t love was the author’s use of “pussy”. Its used frequently and in many variations (pussy lips, pussy juice, etc). I found it a little distracting but I hate to complain about it since what the hell else can she say?? I think it was noticeable because of a phrase that was used that was really similar to one used in Book 1. It was something about Anna’s pussy juices being speckled on Blaine’s cuff and I’m thinking, how does pussy juice get speckled and how did it get all the way up on his cuff?? I guess I don’t want the answers to those questions, not really, so it wasn’t a huge big deal but it took me out of the story a little bit.

For all of the pussy talk, I still found this novella a little tame. Of course, I don’t love novellas and these three novellas in the Seen Trilogy could have been put together for one novel but who knows what drives these decisions? I’m happy that I have the third installment because I finally see something external about to happen that is going to be really bad for Anna and I’m pretty sure I know exactly what it is. The fact that I can guess where this is heading is NOT a problem for me because I don’t pick up these books looking for mystery, if you know what I mean. Even though I may think it’s tame, it still has plenty of heat and I think a lot of people would enjoy this, especially those of you who are new to erotica or erotic romance. I don’t think you NEED to read Book 1 before reading this but if you like a slow burn, Book 1 and Book 2 will be MUST-READs for you!

His touch enflames her desires.

Anna Sampson has allowed billionaire businessman Gabriel Blaine to watch her, all of her. And looking is all he’s done—until now. After giving him permission to touch her, Anna realizes she won’t be satisfied until she has all of this handsome and secretive man.

Soon she tempts him, shreds his control, and pushes him too far. Blaine’s reluctance to take her virginity frustrates Anna. He fulfills her fantasy, but what is their reality together?

Part Two of The Seen Trilogy