In Her Man From Shilo by Robyn Richards Rafferty has always wanted to be a professional photographer, but instead he is running the family ranch in Shilo. Raff’s stepfather is ill and has given Raff an ultimatum…either marry Victoria from the neighbouring ranch, or when Jonathon dies the ranch will go to Jonathon’s younger brother. But Raff has a secret and an out from the ultimatum…he has been secretly married to Daimee for 7 years. 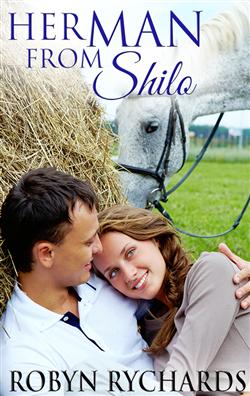 Daimee has always loved Raff. She is also a dancer and Raff wants nothing to come before her dream of dancing. He understands what it means to have to put your dreams aside. When Raff and Daimee are forced into marriage when she is 18 after being caught by her father in a compromising position, they decide to keep their marriage a secret from almost everyone…living apart, never consumating the marriage. Raff wants Daimee to grow up, go to college, and live her dream. Raff cannot see that he is Daimee’s dream. He wants her, but he believes that for the last 7 years he has been doing right by Daimee. Daimee just wants to be with Raff.

Finally Daimee has had enough of this pretend marriage, and goes to Raff’s family ranch in Shilo to confront him. Once she is there there are complications, they are forced to come clean about their marriage and must live together to maintain the charade of marriage.

Will living together force them both to finally confront their feelings and be honest with one another? Can Raff finally see Daimee as a grown woman who wants nothing more than to be with her husband physically as well as in name? Will they find the courage to follow their dreams?

Her Man From Shilo gives us some really interesting characters. Daimee has always known what and who she wanted, and until now she has been willing to play by Raff’s rules. Raff seems to struggle to see Daimee as a grown woman, and to express how he feels. Daimee comes across as a stronger woman than Raff seems to think she is. Raff thinks he’s protecting her and helping her grow, but is he really?

The secondary characters in the book, mainly Raff’s mother and stepfather, played small but significant roles. They were believable, likeable characters, only wanting what was best for Raff.

Her Man From Shilo was a bit confusing to follow for the first part of the book, it seemed to take a long time to get a clear picture of the relationship between Raff and Daimee and why they had this type of relationship.

Daimiana Casey and Rafferty Pierce are two life-long friends who were forced into a shotgun wedding. Rafferty has kept their marriage secret for years, and they lead separate lives.

Daimiana is a choreographer longing to be a real wife to her husband, when a life-changing job offer forces her to choose between the two passions of her life.

Rafferty has sacrificed his career to run the family ranch and has sacrificed being with the woman he loves so she can share her talent with the world. Now his dying step-father is threatening to name his brother as heir unless Rafferty marries. Passion and tension erupt as these two finally resolve a lifetime of love.