In His Forbidden Diamond by Susan Stephens, Former soldier and diamond dynasty heir Tyr Skavanga has finally come back to his hometown in the cold north. His heart is frozen and haunted by the terrors of the war. Therefore he does not expect the exotically beautiful and innocent Princess 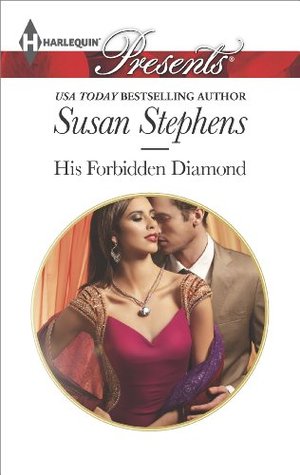 Jasmina of Kareshi to invoke feelings in his hardened heart.

Jasmina has her reputation to protect for the sake of her country and therefore Tyr is completely off limits for her. But their electric connection is making it harder for both of them to stay away much longer and denying their connection could prove to be the toughest challenge they have ever faced….

His Forbidden Diamond by Susan Stephens is the fourth and final part in the Skavanga Diamond series. A lot of anticipation was build up in the previous books regarding Tyr and his sudden disappearance. Therefore I was expecting a lot from the hero but sadly he failed to match up to my expectations. Tyr was a good hero but there was not much to explore in his character. He suffered the horrors of wars but the extent and how much it affected him was not explored much. His character was not fully developed and therefore I felt disconnected with the same. Jasmina is a wonderful heroine and it was refreshing to see a princess taking her duties seriously without feeling trapped. I loved her sense of duty and how seriously she took her role. She was a strong and inspiring character. The story started out great but was a little slow for my tastes.

Overall, His Forbidden Diamond by Susan Stephens is a well written romance. It tells a good story but nothing extraordinary.

The only woman he can’t have…

Former soldier and diamond dynasty heir Tyr Skavanga has finally returned to the cold north. Haunted by the terrors of war, heâ€™s cut himself off and hardened his heart. But now one person has managed to defy his defenses, and sheâ€™s the last person he expected.

…is the only woman he wants!

The exotically beautiful, innocent Princess Jasmina of Kareshi is strictly off-limits. Like Tyr, she has a reputation to protect, but denying their electrifying connection could prove to be the toughest challenge they have ever faced….

« REVIEW: Only with You by Lauren Layne
REVIEW: The Man Plan by Tracy Anne Warren »

2 Responses to “REVIEW: His Forbidden Diamond by Susan Stephens”