In Hot and Bothered by Liz Maverick, When Cassie Hagen said she would host her younger sister Anna’s twenty-fifth 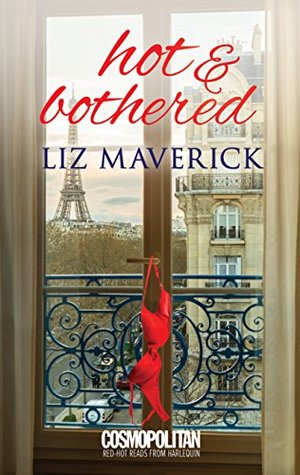 birthday bash in Paris, she didn’t realize Anna had invited Jack Marchand and his brothers to the shindig. Jack was the one who broke her heart in high school while he was in America. He had become one of her closest friends, only to turn his back on her when things turned serious, leaving her the laughing stock of the school.

“Rewrite history with me, Cassandra,” he said, the fire in his eyes burning into my damaged soul.

Now Cassie travels the world buying and remodeling rental properties for her boss, Mr. Brooks. But money isn’t what she craves. No, she wants to know why Jack treated her so poorly and to finally get an apology and closure to one of the most embarrassing experiences she ever went through. It turns out, though, that Jack truly does feel badly about the way he handled things. And within minutes of their reunion, the attraction between he and Cassie is more noticeable than ever. Can she trust her heart again to someone who let her down once before?

“I made a big mistake with you ten years ago. I let you and everything that you represent go. I chose what I thought I was supposed to choose, and I lost myself. Finding you again has been like remembering how I want to live.”

Hot and Bothered is a perfectly titled short story from Cosmo Red-Hot Reads. Ready for a second chance romance set in Paris with a sexy French businessman and a smart and savvy American businesswoman? Mais oui!

I thought this novella was pretty charming. I’m a sucker for reunion romances anyway, but something about the setting and the backstory between Cassie and Jack made this a quick but satisfying read. I liked that there was light humor blended into the story, mainly in Cassie’s inner monologues where this is written from her POV. But she and Jack had wonderful chemistry, also sharing some lighthearted moments, both as friends and so much more.

Jack had that bit of dramatic French flair to his personality and it really came out in his passionate conversations with Cassie. It was uber romantic and a lot of fun. And she had that stubborn American streak that had her digging in her Louboutin’s to keep herself from giving in again to Jack’s charms. I was a little disappointed in Cassie’s choices toward the end, caused by a miscommunication with Jack, but of course it worked out, so we did get a HEA when all was said and done.

I think fans of fast and amorous romances with characters that have a lot of history together will enjoy Hot and Bothered.

Hosting a fabulous party is the perfect cap-off to Cassie Hagen’s successful business trip in Paris. Living in the land of decadent macarons, French fashion and champagne is great�especially compared to her past life as the scholarship student at a tony New York private school.

Then Jack Marchand shows up. Sure, he’s hot, French and superapologetic about how he humiliated her in high school. He was all of her firsts: her first lover, the first to break her heart and the first to dump her after one night together.

Jack has never forgotten Cassie. He’s determined to prove he’s changed and win her back. As an apology, it’s pretty much perfect. Deliciously so. But Cassie isn’t quite ready to forgive him.

4 Responses to “REVIEW: Hot and Bothered by Liz Maverick”