Hotshot Hero on the Edge by Lisa Childs finds firefighter Luke Garrison in a tough spot. His best 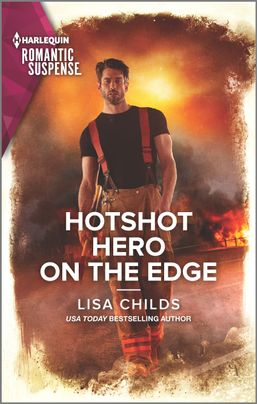 friend was murdered and his fellow firefighters suspect he was involved, and his wife has kicked him out, blaming him and the stress his job causes her on her miscarriages.

It gets worse when it becomes clear someone is trying to kill Luke, and his wife, Willow, discovers she’s pregnant. With the help of the few firefighters that believe him, along with Willow, he sets out to prove his innocence once in for all.

This is the sixth book in the series. I have not read any of them, and I felt I was dropped in where the last book may have left off. As such, I recommend reading the series in order, because I was confused. For example, was there something Luke did in the previous book that made his co-workers believe he may have been involved with the murder of his best friend? Why did they believe the rumors instead of him? I don’t know because I didn’t read the previous books, and it’s not clarified in this one.

That being said, I disliked most of the characters in this book. Let’s start with Willow. She kicks Luke out at his lowest point and says she doesn’t want to see him again. She doesn’t even tell him about the pregnancy; he had to find out on his own. But what really annoyed me with Willow was that she repeatedly kept wondering why Luke didn’t come back to her. After the way she treated him and the things she said, why would he? Yet it was mentioned over and over, and the repetitiveness made her come across as whiny.

Next, let’s move on to Luke’s fellow firefighters. Not having read the previous books, I was honestly confused at their treatment of Luke. Most of them didn’t believe someone was trying to kill him. They didn’t believe he wasn’t having an affair with his best friend’s wife or that he didn’t help her murder them. They’re supposed to be a close group, so it baffled me how they treated him.

Then there’s Luke, who I felt lacked a backbone. He lets Willow treat him poorly and yet still wants to get back together with her. His firefighters turned their backs on him, yet he says there’s no one he’d trust more than them to protect Willow. I was also left wondering about this conversation between the couple:

”Those Hotshots are your family:
He snorted. “Some family…”
“They all feel badly for ever doubting you,” she assured him. “They don’t want you to leave and neither do I.”

How does Willow know the other Hotshots felt that way? There’s nothing that points to that. There are no apologies given. Readers do not get to see his co-workers demonstrate that they’re sorry or that they want him on the team. Neither do readers see them say anything to Willow, so I didn’t buy that they were sorry and that they wanted him back on the team.

In addition to the multiple attempts on Luke’s life, there are also incidents of sabotage happening at the firehouse. This, too, seems like it may have been carried over from the previous books. It wasn’t resolved in this book, so I think it’s safe to assume this is going to be an on-going storyline in future books.

I wanted to like this story, but it was hard when the characters were so unlikeable. I’m sure I still wouldn’t have liked Willow if I had read the previous books, but I have to wonder if something happened in them that would lead to Luke’s treatment by his co-workers in this one. Perhaps if I had a little more background and understanding of the issues and their relationships, I wouldn’t have been so annoyed by their behavior in this one. This book would be for readers who enjoy romantic suspense, but, once again, I highly recommend not jumping into the series here.

Unable to stand the stress of being a firefighter’s wife, ER nurse Willow Garrison asks her husband to leave. Not long after, however, she realizes she’s carrying his child! When his reputation and life are in danger, she lets Luke back into her life. But just who wants to destroy him? Guilty and suspicious, Willow admits her lingering feelings. Can she trust the hotshot to prove his innocence and keep them safe?