How to Love Your Elf by Kerrelyn Sparks is the continuation of her Embraced series. The series 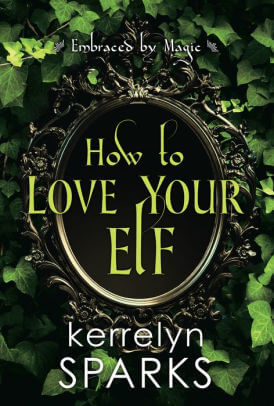 name (for the first three books) changed from The Embraced to Embraced by Magic due to a change in publishers. I am so glad Kensington picked up this series as I have loved the previous books and it’s great that readers get to have the rest of the stories.

On the world of Aerthlan there are five kingdoms. Two times a year one of the world’s two moons eclipses the other. Children born during the eclipse are gifted with various types of magic. These children are called the Embraced. The Embraced are sometimes feared and persecuted. For their safety and various other reasons five such embraced are sent to the Isle of Moon. They declare themselves sisters, Luciana, Brigitta, Gwennore, Sorcha and Maeve. Luciana’s story can be found in the book How To Tame A Beast in Seven Days (Book #1), Brigitta’s story in So I Married A Sorcerer (Book #2) and Gwennore’s story in Eight Simple Rules for Dating a Dragon (Book #3).

Sorcha and her sisters have gotten together for the wedding of their sister Gwennore. Their Game of Stones has predicted the mates of sisters Luciana, Brigitta and Gwennore. Now it’s Sorcha’s turn to pick three stones. Her stones are the number five and the colors white and lavender. The sisters surmise the number five refers to the evil Circle of Five who have been trying to take over Aerthlan. Sorcha wants to disagree with her sisters about the meaning of the colored stones because the color white probably stands for the white-blonde hair of the elves and the lavender for the common eye color of the elves. Well the stones are wrong this time. They have to be. Sorcha has no interntion of falling for an arrogant elf. But then she accompanies Queen Gwennore and King Silas to the border of the Elf kingdom of Woodwyn where she is captured by the Elven army. Fortunately for Sorcha the mysterious Woodsman is watching and later sneaks into the Elven camp and rescues her. Who is this Woodsman? Can Sorcha trust him? The Woodsman promises to keep her safe and return her to her friends and family. But will he?

The Woodsman has a great secret. His plans for the realm of Woodwyn are coming close to fruition. He really has no time for beautiful Sorcha but there’s something about her that really attracts him. The more time they spend together the more attracted he becomes. And he believes that Sorcha is attracted to him too. He must keep her safe. His plans must go through.

This book is just as much fun to read as the previous ones. Sorcha and the Woodsman who, yes, is an elf are such a fun couple. Their back and forth adds levity to to the story. There’s plenty of action and heroic as well as evil deeds to keep readers turning the pages. Fans of Fantasy Romance will love this story.

Raised in isolation on the magic-shrouded Isle of the Moon, five girls became five sisters. Now women, they are ready to claim their places in the world—and perhaps change it forever . . .

Sorcha knew the mission was dangerous. Leaving the safe grounds of her brother’s kingdom and parlaying with the elves across their border . . . well, treachery seemed at least as likely as true peace. But to support her sister, Sorcha would brave far more than the underhanded ways of the elves. Or so she thought, before she was taken hostage.

Of course, her captors didn’t count on her particular abilities—or on the help of the Woodsman, the mysterious thief who made his home in the forest. He saw the battle from the trees, saw the soldier attacking against incredible odds to save a comrade—and then saw the valiant fighter revealed as Princess Sorcha of Norveshka. He can’t tell if he wants to kidnap her or kiss her. But despite Sorcha’s stubbornness, his inconvenient honor, and a rebellion on the cusp of full war, something burns between them that neither can let go . . .

2 Responses to “REVIEW: How to Love Your Elf by Kerrelyn Sparks”