Hunting the Colton Fugitive by Colleen Thompson is the eleventh book in the Harlequin series, The 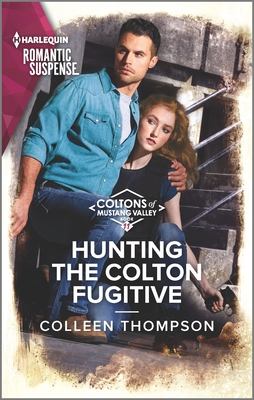 Why did she take this job? A bounty hunter really can’t be too picky and, yes, she really needed the money to pay her deceased father’s gambling debt, but there’s something off about Selena Barnes Colton’s request that she find Ace Colton. She really really needs the money though. Vegas loan shark Ice Veins has threatened to do her body serious damage if she doesn’t pay up in full. NOW! So when she discovers Ace Colton’s hideout and he talks her into accepting payment from him instead of Selena she foolishly agrees.

Ace needed to get to a place where he could safely use his cell phone to transfer the money to her. They donned disguises and headed out – right into the arms of Ice Vein’s thugs. A fight ensued, shots were fired. They managed to get away and escape to a cash only “no tell” motel but the goons, along with Ice Veins found them. Things got ugly fast. Shots were fired, knives were thrashing – mayhem. Good thing Ace texted his cousin Sergeant Spencer Colton who arrived at the melee just in time. So now her bounty is in police custody and she’s been paid but she just can’t leave Ace in a bind. He has been framed for the shooting of Colton patriarch, Payne Colton. Sierra is determined to prove Ace’s innocence. Then even though she is falling for Ace she has got to leave.

Ace Colton ran when faced with possible arrest for shooting Payne Colton, patriarch of the family. They had argued shortly before the shooting but Ace is innocent. He spends his time in his hideout on his laptop searching for clues to the shooter’s identity. Then bounty hunter Sierra Madden breaks into his hideout. When he learns Selena Barnes Colton hired her he is concerned as to Selena’s motives and is determined to find answers. What has really thrown him off though is the news Sierra imparted that he has a daughter named Nova who will soon give birth to his grandchild. There’s so much going on in his life yet he can’t get thoughts of Sierra out of his mind. He has no time for this but there’s something about Sierra that attracts him.

The Colton family has faced so much danger and problems but Ace Colton seems to have suffered the most. He is running from the law after being framed for a shooting he didn’t commit. I love that this author found the perfect match for Ace in Sierra Madden. Colleen Thompson has a solid plot and the pace is good. The story arc moves along in this book as we finally find out who shot Payne Colton and why. What’s left is to find the Colton heir who was switched at birth with Ace. I’m sure we will get a satisfying conclusion in the last book in the series, Colton’s Last Stand by Karen Whiddon.

Her business is finding criminals…

But can she risk falling for a fugitive?

Capturing Ace Colton is the solution to bounty hunter Sierra Madden’s troubles. The bounty will pay off the vicious loan shark whose goons are after her. Too cynical to buy Ace’s protestations of innocence, Sierra tamps down her attraction. But when she’s attacked, Ace chooses to rescue her rather than escape. And Sierra realizes she’s been falling for an innocent man.

« Spotlight & Giveaway: Back in His’s Ex’s Bed by Joss Wood
REVIEW: Nothing Compares to the Duke by Christy Carlyle »

One Response to “REVIEW: Hunting the Colton Fugitive by Colleen Thompson”