This is such a strange book to review. I feel like I could really give this two completely different reviews. There were things I loved in If I Were You by Lisa Renee Jones and things I hated. But isn’t that always the case?

For the purposes of this review, I’m going to assume that you, the reader, have NOT read the Inside Out Novellas, which is a series of short stories written in diary form by Rebecca, one of the central figures of If I Were You. 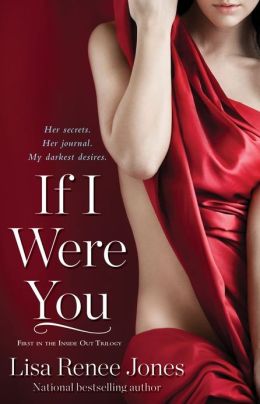 Sara, our heroine, happens upon a set of diaries written by a woman named Rebecca. The diaries detail Rebecca’s descent into the world of BDSM. But Rebecca has gone missing. Sara feels a kinship with Rebecca and vows to find out what’s become of Rebecca. The first order of business is to get a job at the art gallery where Rebecca worked. Sara happens to have similar qualifications as Rebecca and quickly acclimates to her new job. Sara makes some new friends, especially the sexy and successful artist, Chris Merit! I thought that Sara was a well written character. I really liked reading about her and liked reading from her POV. She seems to really care about Rebecca and although that might seem strange, it makes total sense in the context of the book. Rebecca and Sara were both dissatisfied with their lives and were longing for something more. So I really understood how Sara could completely identify with her. But I have a couple of issues: First, Sara is pretty much obsessed with Rebecca and with Rebecca’s lifestyle. Sara has, in a way, taken over Rebecca’s life and its a little creepy. Second, as soon as a hot guy looks her way, Sara forgets about her noble quest to find Rebecca. Third, she’s constantly reminding herself to not forget about Rebecca and right after she reminds herself, she goes right back to screwing her boyfriend. Lastly, I feel like Sara didn’t know herself at all. One minute, she craves having a man dominate her and when her boss gets bossy, she gets all quivery in her lady bits. But later, when her boyfriend tells her what to do, she balks. So which is it? You want to be dominated or you want to be the boss? Because you sort of have to choose who you want to be.

Now, Sara’s boyfriend, Chris, is pretty great. Don’t get me wrong. Chris is, in some ways, the exact carbon copy of EVERY OTHER rich-guy-who-is-into-BDSM character that we’ve been subjected to lately. He’s filthy rich and he’s a member in a super private club that has a sex dungeon. Blah blah. Although he may not be original, I still really liked Chris. He’s from old money AND he’s made his own millions, which I love. He’s grotesquely rich but he gives tons and tons of money to this children’s hospital and he’s always going there and visiting with sick kids, so you know he’s a really good guy. He drinks beer so he’s kind of a normal guy we can identify with. He rides a motorcycle and dresses the part with the leather and Harley T-shirts but he has, like, 3 or 4 motorcycles and a Porsche so you don’t forget that he’s rich. I mean, I think Chris is one of the more rich and fleshed out characters that I’ve read in a while. Plus, I’ve not seen the rich guy being an artist and that’s kind of neat twist on it! But he’s written from Sara’s point of view so we only get little pieces of him; the pieces that he’s willing to share with Sara. So really, we know very little about Chris but the author gets you to love him really quickly.

My biggest complaint about this book is that there really isn’t much to differentiate it from all of the other erotic romance trilogies that have made so many headlines these days. Having said that, there are a couple of differences that may help you think around the similarities. First, there’s the Rebecca story line/mystery. Rebecca is the driving force behind everything that happens. She’s the reason that Sara’s whole life changes. Another difference is that there really isn’t much BDSM in this book! Its certainly hot but no one gets tied up or even blindfolded! Aside from the differences and similarities, there are plenty of reasons to give this book a chance. The hero is awesome and tormented. There’s a little bit of a mystery. Actually, that mystery ends up becoming TWO mysteries when Sara’s neighbor goes missing too!! This last point, you can judge for yourself if its a good thing or a bad thing… If I Were You almost feels like two separate books. There’s the beginning, where we meet Sara and get to know her and her life and she gets to know Rebecca (through Rebecca’s writing) and where Sara makes her decision to locate Rebecca. Then, there’s the second half of the book, where Sara is essentially living Rebecca’s life and where she meets Chris and gets involved in him. I loved it!

Overall, this book sort of ripped my heart out and shoved it in my face and said, “Seeee?! It still beats!” and then ran off with my heart in its book-y little hands while cackling an evil laugh!! I mean that in a good way! It ends on a little bit of a cliffhanger so be prepared to wait if you don’t have the next book in the series, Being Me. Join me again when I review THAT one!

Publisher: Gallery Books Release date: March 12, 2013 | Series: Inside Out Trilogy (Book 1)
He is rich and famous, and dark in ways I shouldn’t find intriguing but I do. I so do. I don’t understand why his dark side appeals to me, but the attraction between us is rich with velvety promises of satisfaction. . . .In the bestselling style of Fifty Shades of Grey, Lisa Renee Jones delivers sexy thrills and heart-pounding sensuality with a tantalizing page-turner in which the eyes of a high school English teacher are opened to a world she never knew existed, and she finds a passionate craving within that she never knew she possessed.The journal comes to Sara McMillan by chance, when she inherits the key to an abandoned storage locker belonging to a woman named Rebecca. Sara can’t resist peeking at the entries in the journal . . . and she finds a scintillating account of Rebecca’s affair with an unnamed lover, a relationship drenched in ecstasy and wrapped in dark secrets.

Next in this thrilling new trilogy: look for Being Me and Revealing Us.

3 Responses to “REVIEW: If I Were You by Lisa Renee Jones”