Just Another Love Song by Kerry Winfrey: Once upon a time, Sandy Macintosh thought she would 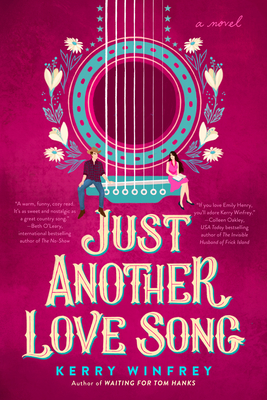 have her HEA with her high school sweetheart, Hank Tillman. Hank was destined for bigger things, and they both had dreams to escape town together.

When Sandy’s plans fall through, she stays back in their small town in Ohio while Hank goes off to Boston to follow his dreams to be a musician, with the promise to stay together. Only that plan falls through, too.

Sandy thought she had steeled her heart from Hank until he is standing in front of her at the grocery store. When she can’t avoid him in her small town, she decides they should be friends, but when there are unresolved emotions over the end of their relationship, Sandy questions whether that’s the right choice or not.

Hank was blindsided when Sandy decided to end their relationship. Now that his marriage is over, he’s back in his hometown to find out if there is still a chance. With his young son in tow, he finds the parts of his life that he missed while being on the road. Can he convince Sandy to give him another chance?

Sandy was a strong female lead, but she questioned if she was enough a lot. It started when she was young, and she she was unable to go away to school. Since then, she felt like she was holding others back, but she ends up holding herself back in the process. As she explores her connection with Hank again, she has to face the truth about what and who she wants.

I really enjoyed the way the book was written. It used flashbacks in a smart way that added to the story in order to get to know the character’s pasts. When we were caught up to the background, they stopped, and we were able to focus on the present. It was super refreshing to not have unnecessary information in them either. Instead, it focused on what we needed to know as a reader without extra fluff.

Overall, the book was so cute. I was enthralled by the relationship between Sandy and Hank and really wanted to see them give in to their feelings. I think they both make each other stronger in the ways they needed, which is serious relationship goals.

Two high school sweethearts get a second chance at their perfect ending in this charming new romance by Kerry Winfrey, author of Very Sincerely Yours.

Once upon a time, Sandy Macintosh thought she would have her happily ever after with her high school sweetheart, Hank Tillman. Sandy wanted to be an artist, Hank was the only boy in town who seemed destined for bigger things, and they both had dreams to escape town together. But when Sandy’s plans fell through, she stayed in their small town in Ohio while Hank went off to Boston to follow his dreams to be a musician, with the promise to stay together. Only that plan fell through, too.

Fifteen years later, Sandy runs a successful greenhouse while helping her parents with their bed and breakfast. Everything is perfect…until Hank rolls back into town, now a famous alt-country singer with a son in tow. She’s happy with the life she’s built by herself, but seeing Hank makes her think about what might have been. There aren’t enough cliché love songs in the world to convince Sandy to give Hank another chance, but when the two of them get thrown together to help organize the town’s annual street fair, she wonders if there could be a new beginning for them or if what they had is just a tired old song of the past.

« REVIEW: The Billionaire Behind the Headlines by Rachael Stewart
Spotlight & Giveaway: Hard Road Home by Fiona Marsden »
Comments are closed.