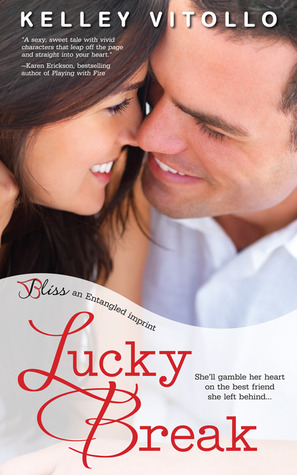 One lucky break is all struggling actress Sidney Williams needs. But when living the LA life becomes too much, she heads back to the small town of Shamrock Falls for the vacation she needs to get her life on track—and immediately runs into Kade Mitchell, her former best friend and the boy next door she’s always regretted leaving behind.

Kade, the new owner of Lucky’s—once the most popular bar in Shamrock Falls—is determined to bring the place back to its former glory, and seeing Sidney again is a distraction he doesn’t need. Sure, the chemistry between them is explosive, but Kade can’t let himself fall into a fling with his best friend—not when he knows she’s soon heading back to the glitter of Tinseltown.

Now, with the possibility of her first major acting role looming, Sidney must decide if her lucky break is in Hollywood or right where she left it—in Shamrock Falls.

This is a very entertaining read about second chance love.

Sidney has always thought that her dream is becoming a star in Hollywood the way that her mom is a star in Broadway. But after 5 years struggling she is back in Shamrock Falls for a month vacation to get her life back on track. But can she leave all the people she left behind 5 years ago again?

Kade is back in Shamrock falls after 5 years away. He has bought Lucky’s the bar and bowling alley where he used to hang out as a kid and he wants to bring it back to it’s former glory. But he doesn’t expect to run into Sidney, she left him behind and never looked back. But can he forgive her and give his former best girlfriend another chance?

I really liked the way that this story was written. A lot of the issues the main characters had and had to overcome, came from their past. Kelley Vitollo knew how to incorporate those pieces of the puzzle little by little throughout the story, making easy to understand the characters and their background without overwhelming the reader with too much information at once.

If you like a nice contemporary romance about second chance love, this story is for you.