Magickal Mystery Lore by Sharon Pape  is the forth book in her Abracadabra Mystery series. I didn’t read 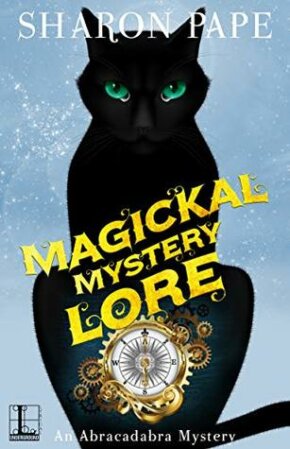 any of the previous books in the series but I still managed to follow along with the characters and their interests.

Kailyn Wilde is a witch who owns a potion shop in the small town of New Camel, New York called Abracadabra. She sells everyday products with a little magic added. Following the death of her mother and grandmother Kailyn is left to run Abracadabra on her own. Her sole remaining relative is her Aunt Tilly who is a fortune-teller. Along with her news reporter love interest, Travis, Kailyn has been instrumental in solving some local murders. In this story a woman is found dead behind Kailyn’s friend Lolly’s candy shop with one of Lolly’s fudge knives in her back. There are very few clues to go on in this case but Kailyn and Travis are determined to find the killer. They will be surprised at how dangerous this case will be.

Magickal Mystery Lore by Sharon Pape is the second book in her Abracadabra Mystery series. I didn’t read any of the previous books in the series but I still managed to follow along with the characters and their interests. The storyline was complex enough to keep me guessing until the end. There are surprises throughout the story too. I really liked the characters and their interactions. There were plenty of interesting interludes and fun scenes. I was attracted to this book because it deals with witches and magic as well as a murder mystery and I was not disappointed by that. I’d like to find a potion shop like Abracadabra and experince some of Kailyn’s magic. Now that would be fun!

The New Camel Day Fair is a fun-filled event for residents of this upstate New York town. Kailyn Wilde, a modern-day witch of ancient lineage, leaves her potion shop, Abracadabra—and her feline familiar, Sashkatu—to attend with her fortune-telling Aunt Tilly. Joining them is legendary wizard Merlin, who’s discovering new pleasures of time-traveling to the modern world, including curly fries and kettle corn—but the appeal of the Tilt-a-Wheel is beyond his mystical imagination.

The real wild ride begins later, when neighboring sweet shop owner Lolly rushes into Abracadabra with news about a dead body. The victim has one of Lolly’s fudge knives stuck in her back, but in spite of the sticky evidence, Lolly is only one of several suspects with ample motive and opportunity. Meanwhile, Merlin’s research into old family scrolls and electromagnetic ley lines is causing some unusual mix-ups. As the two investigations collide, Kailyn will have to do everything in her power to prevent disaster…

One Response to “REVIEW: Magickal Mystery Lore by Sharon Pape”